Bloodstock giant Coolmore Farm Stud has set another record, increasing its hay yield by 24pc from 125 bales/ac to 155 bales/ac, baling a record 27,850 and unloaded 22,000 bales in four different locations in one day.

“We’re delighted with this year’s crop with good quantities of top-quality hay. We would normally aim to make our hay in early June but with the late spring everything was behind so this spell of fine weather has arrived at just the right time. On Sunday alone we baled a record 27,850 bales and unloaded 22,000 bales in four different locations” said Joe Holohan, Coolmore farm manager at Coolmore Stud. 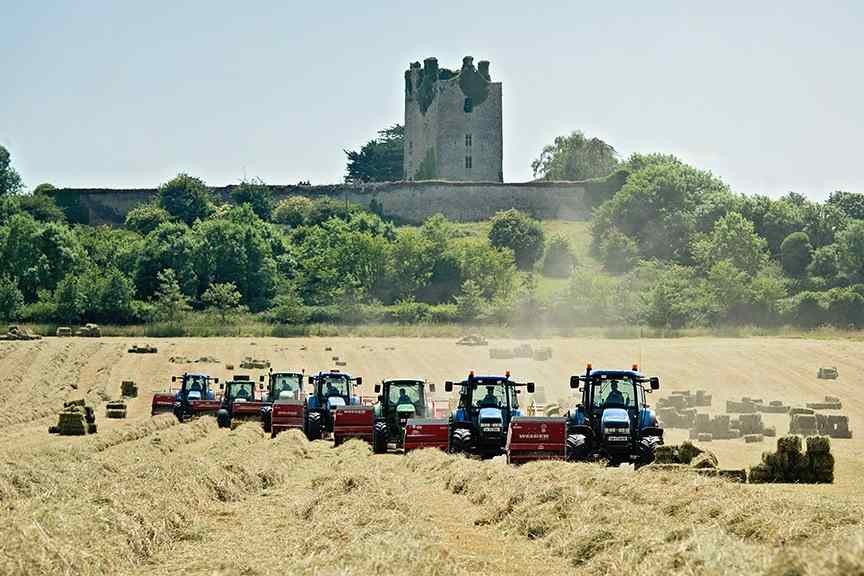 The business is owned by John Magnier from Fermoy, Co Cork. Operating since the 1850s the Magnier family has a long-established tradition in the South of Ireland. Coolmore Stud is one of Europe’s dominant horse racing and breeding operations and is a global leader, standing the top stallions in Europe, the USA and Australia.

900 acres are set aside every year for hay that on normal years would produce 125 bales per acre – more than 100,000 a year.  It always makes more hay than it needs for bad years such as last year.

It is predominantly rye grasses and Timothy mixtures, horses love the Timothy as it is a sweet palatable crop and is high in fibre – very important for horses’ digestive tracts.

Management and growing of crop

Where necessary it reseeds if it needs to improve the grasses in a sward. It uses its own farm yard manure and it is composted on the stud farm.  This is spread in the autumn with our its equipment. It takes one cut of hay.  It then grazes with cattle and sheep towards the end of the year to clean off the paddocks for the winter. Soil and herbage analysis are done on a regular basis. The hay ground is not grazed in the spring time.  It uses approximately 70 units of nitrogen in late spring, it puts this out in two applications as to vary the maturity of the crop. It aims to cut early in June as soon the crop heads out and then on a continuing basis as subsequent crops mature given suitable weather. It stops some fields later just in case weather is bad in early summer.  If the hay is not going to be top notch it is then used for silage for wintering cattle. 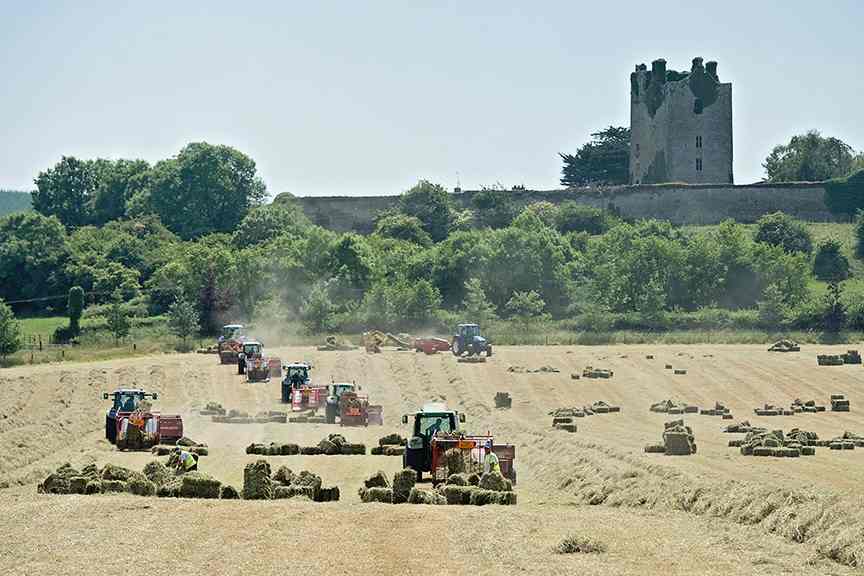 Given suitably dry and sunny weather, hay is cut and turned within a few hours and then continuously throughout the first day.  As the hay becomes fitter it is turned with lesser frequency. Ideally it is baled on the third day at about 65 per cent dry matter. Straight away it is put into the barn and bales are placed with the cut edge towards the vented area in the barn and subsequently the fans are attached to blow cold air through the bale ensuring a higher-quality product. Staying too long in the sun would result in a drop in the nutrient value which is why Coolmore conditions it in barns to hold it as a top-quality product. It aims to achieve an end product with a DMD value in the mid seventies and an ME value of 11. Protein would be around 10 per cent plus and dry matter in the high 80s. Top-quality hay is essential for bloodstock especially racehorses because a poorer quality can cause respiratory problems.

The harvest itself requires a large fleet of machinery. Small square bales are a very labour intensive method of saving hay.  A large team of people is required to harvest this crop that it sources from the local community with help of Farm Relief Services.  In any given day in peak hay season it can have up to 100 extra local people along with 50 Coolmore staff working in various teams.

In Ireland between Coolmore, Ballydoyle and associated studs it employs close to 1,000 people.  Coolmore itself is home to more than 2,500 broodmares during the season. It wasn’t an accident that the heart of the Golden Vale was chosen as the location as the limestone base makes for top-quality grazing land for producing top-class bloodstock and also yields top-quality hay due to the calcium and other minerals.