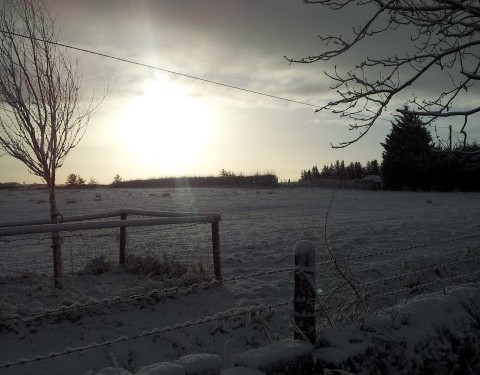 Met Eireann has issued a snow-ice warning for Connacht, Cavan, Monaghan, Donegal, Longford and Westmeath which is valid from 8am this morning December 26.

It says heavy rain will turn to sleet and on higher ground to snow with the risk of snow on lower levels in the afternoon and evening.

Forecasts suggest a cloudy day today with scattered outbreaks of rain, heavy in places and turning to sleet or snow in places also.

Met Eireann says there will be strong winds locally as well so visibility and driving conditions may be poor at times across the country. Temperatures will range from 3 to 10 degrees (highest in southern counties).

It also says Northern counties will stay mostly dry today and a clearance will extend eastwards to all other parts this evening.

It says the day will be a cold, blustery one with a mixture of sunny spells but passing heavy wintry showers will occur also. Highest temperatures will be just 3 to 6 degrees and feeling very cold in the fresh to strong north to northwest wind.

However. On Saturday night skies will clear generally as the showers die out and the northerly winds ease.

Met Eireann says there is a risk of some snow showers streaming down parts of Ulster, with lowest air temperatures of zero to -4 degrees with a severe ground frost.