Again, for another week, most factory agents have increased their quotes for lambs by 5-10c/kg. Irish Country Meats (ICM) have also increased the maximum carcass weight specification for lambs to 22.5kg.

Kildare Chilling increased its base price by 10c/kg compared to last week and is now offering a base of 490c/kg + 10c/kg QA (payable up to 22kg carcass).

Kepak Athleague is offering a base price for lambs of 480c/kg + 5c/kg QA (payable up to 22kg carcass); this is unchanged compared to last week.

For ewes, most factories are quoting 260c/kg excluding QA bonuses. 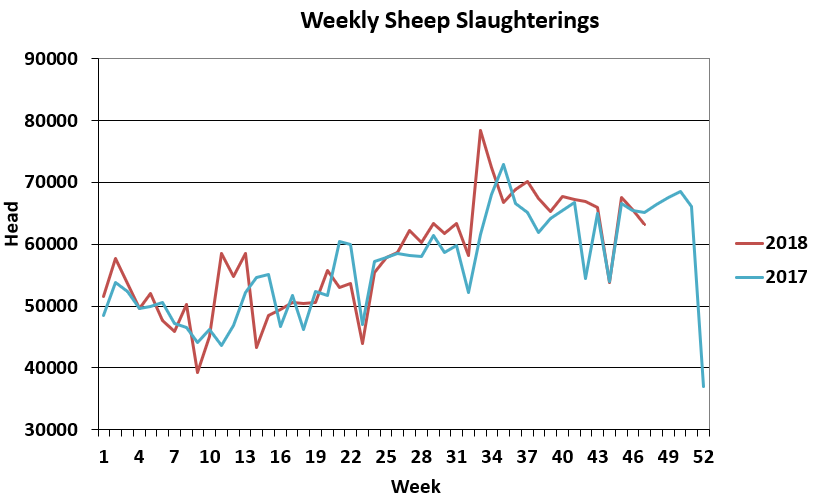 The number of lambs slaughtered decreased by 2,070 head or 3.8% compared to the previous week. In addition, cast ewe and ram slaughterings decreased slightly by 361 head or 3% on the week before.

Official figures also show that almost 2.71 million sheep have been slaughtered up to and including the week ending November 25.

There was a good entry of sheep at Raphoe Mart last Monday (November 26), with an excellent trade reported for all stock on offer. It was noted that there was a strong demand for slaughter-ready lambs with a top price of €114 paid on the day.

On Wednesday last – November 28 – there were good numbers of sheep reportedly presented for sale at Ballinrobe Mart. It was noted that the trade was a little firmer for all types of stock.

There were fewer entries presented for sale at Carnew Mart on Thursday last (November 29), with some 1,620 sheep reportedly on offer.

It was noted that there was a significant increase in the prices paid, with all stock classes achieving an extra €4-5/head. Heavy lambs achieved a top price of €118/head and cull ewes commanded a price of €45-€118/head.

There were some 420 sheep presented for sale at Kilkenny Mart yesterday (December 3). It was reported by George Candler – the mart’s auctioneer – that trade was excellent for all types of stock resulting in a 100% clearance.

It was noted that a top price of €120/head was paid for butcher-type lambs, while cull ewes peaked at €120/head.

Should sheep farmers get a 'BEEP' of their own?