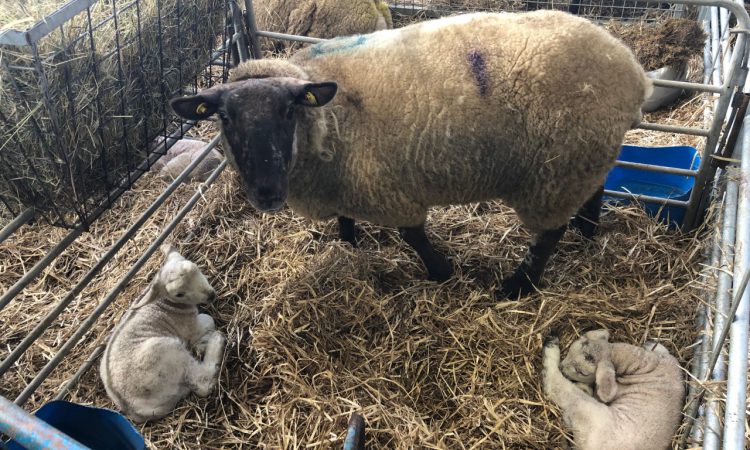 Last week AgriLand paid a visit to Gurteen College, Co. Tipperary, where the early-lambing season had just kicked off.

The next three months are going to be busy for Kenneth Flynn – the farm manager – and Gerard Carey – the drystock manager.

The early-lambing season is the start of the busiest period in the farm calendar. Furthermore, straight after the early-ewes have lambed down 35 suckler cows are due to calve from January 25 onwards.

This, in turn, leads on to the mid-season flock of ewes that are due to lamb down after this (in the first week in March).

The idea of having early-lambing ewes is for teaching purposes, according to Gerard. During the lambing period, students will assist farm staff and learn everything they need to know about lambing.

Moreover, during this period, students work both day and night shifts, with at least two people present in the lambing shed at all times.

At the time of our visit, 30 ewes had lambed down, with a further 55 expected to lamb down over the next two weeks.

The farm operates both an early and mid-season lambing flock, with 85 ewes lambing down now and a further 345 mid-season ewes set to lamb in March.

Likewise, the farm operates a split calving season (both a spring and autumn calving system), with 35 of the 75 suckler cows set to calve from January 25 onwards.

90% of the offspring from the suckler herd are finished, with the bull calves sent to the factory at 16 months-of-age as bull beef; the heifers are slaughtered at 20 months-of-age.

A further 70 bull calves from the dairy herd are reared and finished as steers at 24 months-of-age.

The grazing block around the farm is split in two, with 57ac set aside as a demonstration platform for students to carry out grass measuring. This particular block of land is grazed by 60 ewes and 15 suckler cows, with a set-stocking system applied.

Moreover, a further 250ac is grazed by the rest of the sheep and cattle.

In recent years, the number of breeding ewes residing on the farm has been cut back to free up grass for the ever-increasing dairy herd, with over 100 head fewer on the farm compared to two years ago. 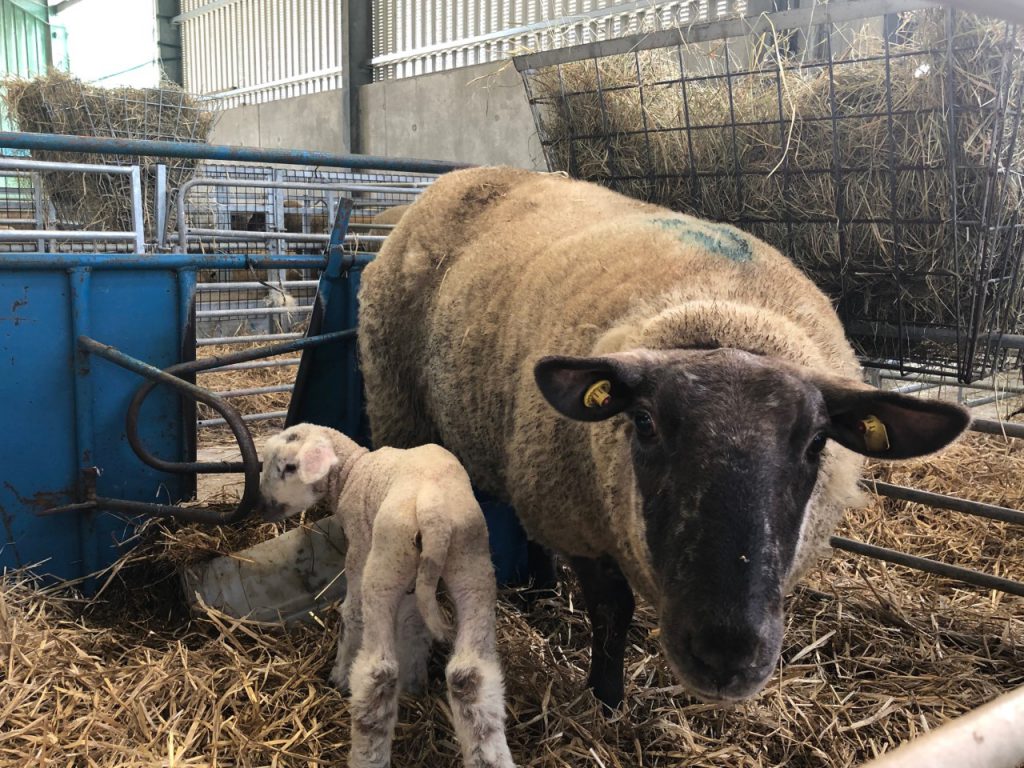 It is nearly six months since preparations began for the 2020 lambing season.

On August 6, 2019, four rams which included: New Zealand Texels; a Charollais; and a Suffolk; were run with the early-season flock.

After six weeks, the rams were taken away and isolated to build up their body condition and get them ready for the mid-season lambing flock.

On October 7, the mid-season flock was divided into four groups, with Gerard running a particular breed and type of ram he felt best suited each group of ewes.

In total, there are 12 rams on the farm. During the breeding season, three rams were run with each group of ewes. 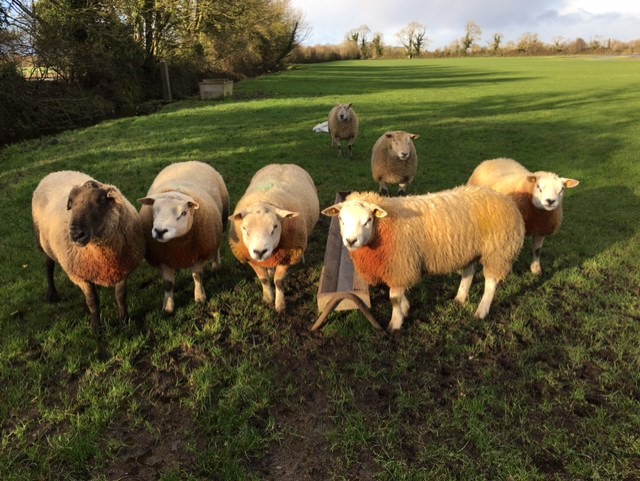 Speaking to AgriLand, Gerard said: “Last year we were ruthless when it came to culling ewes. The aim is to keep a relatively young flock, with the oldest ewes on the farm five years-of-age.

“After the lambs were weaned last year, we culled 80 ewes. The main reasons for culling were for age, missing teeth, mastitis and any one-spin ewes.

“However, we wasted no time in replacing these ewes with Borris ewe-hoggets that we bought from a known source in Co. Carlow.

In total, we purchased 40 ewe-hoggets out of a group of 230, with the aim of trying to pick out the best of them – as they will be the backbone of our breeding flock.

“It was an expensive year for hoggets. However, we were happy with the ones we bought in and the price we got them at. I know farmers that paid up to €230/head and even a small bit more for hoggets – which is crazy money for this type of stock.”

The housing facilities in Gurteen College are very impressive. The shed has a capacity to hold over 450 ewes.

The dual-purpose facility has a number of key features that make it ideal for housing and lambing down ewes.

There is plenty of natural light coming through, with vented sheeting erected around the entire building.

Furthermore, there is a gap – approximately 0.5m – between the top of the vented sheeting and the roof of the shed – which further increases the airflow entering the shed.

The pens are big and have the capacity to hold up to 25 ewes at ease. There are walkways in between each pen that allow the staff to feed the ewes from three sides of the pen.

A small gate is located at the front of the feed-face so that staff can take a ewe and her lambs out of the pen. 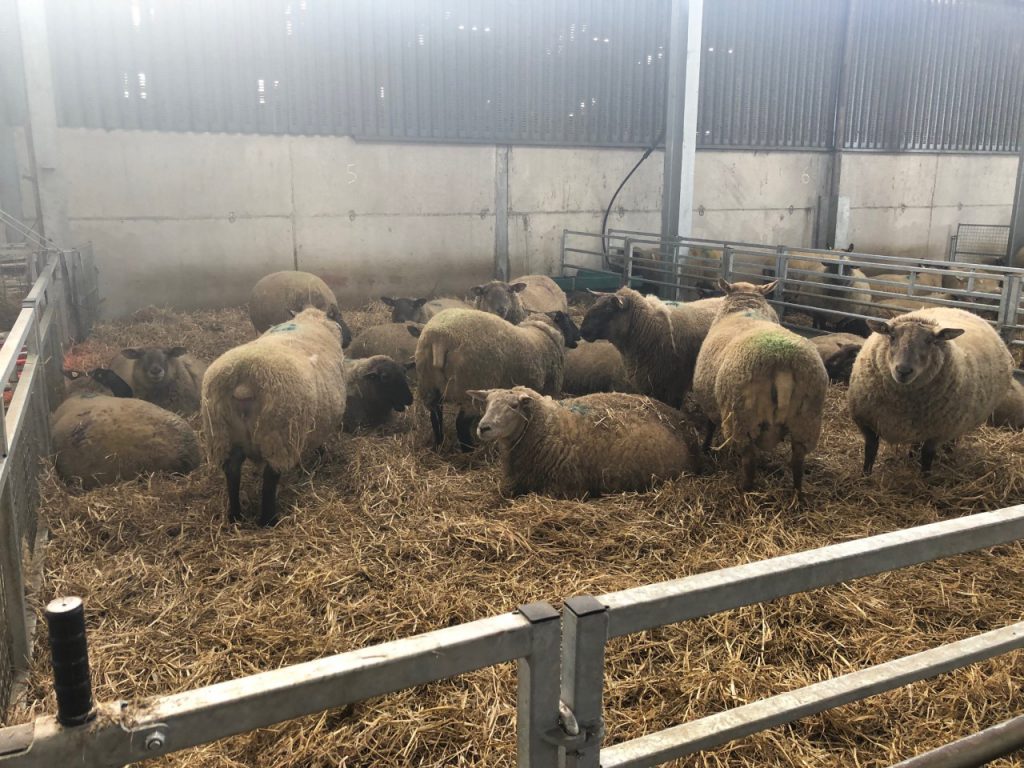 The ewes arrived at the shed in “great nick”, according to Gerard. The early-season ewes were housed on December 1, with the mid-season flock joining them shortly after on December 3.

Last month, the ewe lambs were given access to beet tops and were housed on December 29 – when the weather got bad.

Furthermore, as the ewes continue to lamb down, Gerard plans to tighten up them up and free up pens so that work can begin on cleaning out and setting up individual pens for the mid-season flock.

For the first time ever the ewes are being fed silage during the winter housing period. Gerard and his team took the decision to move away from feeding hay, as they found that the ewes would only “pick out the nice bits” and leave the rest behind.

He added: “Last year we were constantly pushing the hay up to the ewes at the feed-face. Therefore, this year we took the decision to move towards feeding pit silage and haylage.”

Listed (below) is the current concentrate intake of the early-lambing ewes:

However, for the mid-season lambing ewes, they will be fed haylage. The feed was tested and it came back at 74% DMD.

Moreover, considering the mid-season ewes are just over six weeks away from lambing, Gerard has just begun to feed them concentrates. Similar to the early-season flock, he will gradually increase the levels of concentrates offered to the ewes week-by-week.

Listed (below) is the current concentrate intake of the mid-season lambing ewes:

Over the past few weeks, Gerard has noticed that ewes are not eating as much silage as they did when they were first housed.

Therefore, he had no option but to start feeding the ewes concentrates a little sooner than he would have liked to maintain their body condition.

Furthermore, in order to reduce the incidence of prolapse from occurring, he plans to reduce the concentrate levels slightly the closer the ewes are to lambing. 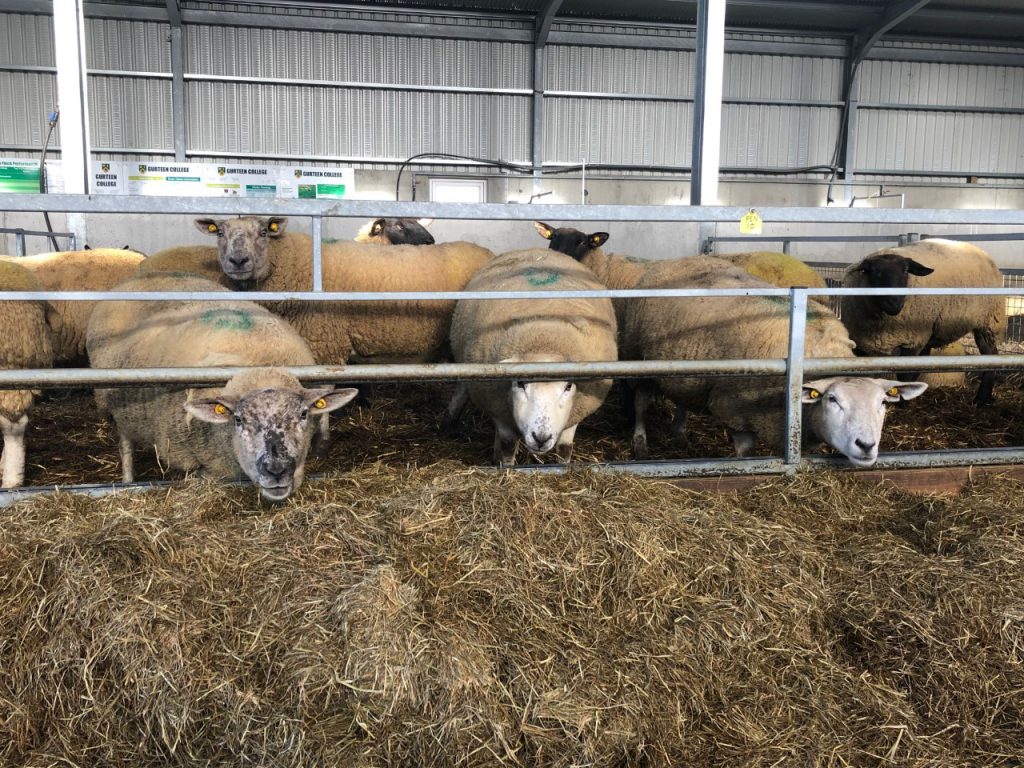 Gerard added: “Last week, one ewe pushed out her lambing bed. Every year, triplet-bearing ewes cause the most hassle; they are under a huge amount of pressure carrying three lambs.

“As well as that, we have to foster the third lamb – onto a single-bearing ewe – which adds to the workload on us, but it also increases the stress on the ewe.”

This year, 51 ewe lambs are set to lamb down. They were scanned last week and Gerard was very happy with the results.

They scanned 1.5 lambs, with only five of them empty. However, these empty ewe lambs, along with any other barren ewes were run with the rams again, and are due to lamb in the first week in May.

Gerard said: “Considering the rams were only run with the ewe lambs for 22 days, the scanning rate is very good.

“Furthermore, we are very happy with how they are thriving. If we were to put the hoggets we bought last summer and the ewe lambs we bred ourselves in the same pen, you would find it difficult to tell which is which.” 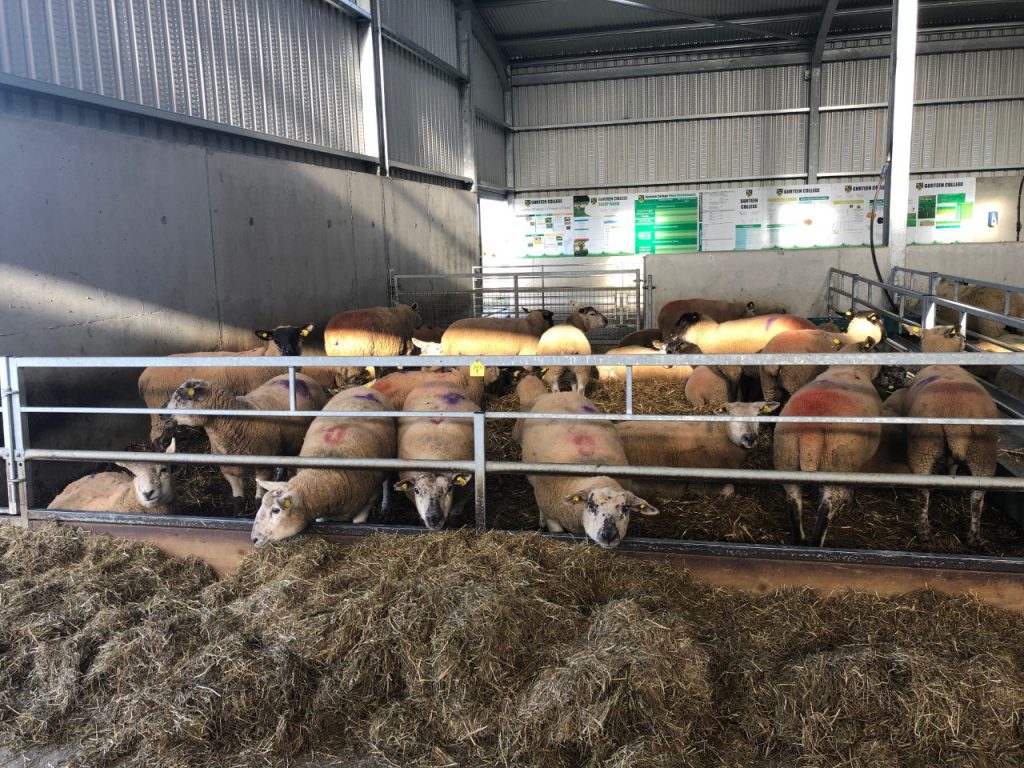 Ewes and lambs at foot

At the time of our visit, 30 ewes had lambed down, with Gerard expecting a “big burst” over the next ten days that should see the majority of the ewes lamb down.

Currently, there have been major issues with lambing, except for the one ewe that prolapsed last week.

He added: “The weather has been great since we started lambing. On average, single lambs and their mothers have been in the shed no more than 12 hours and then moved out to pasture.

“In the case of twin lambs, we have kept them in at most for 24 hours and again straight out to grass after that.

In general, the ewes are lambing down nicely, with good bags of milk and the lambs are thriving well.

“Hopefully we will get the rest of the flock lambed down quickly and move our attention over to the suckler cows who are due to calve from January 25 onwards,” Gerard concluded. 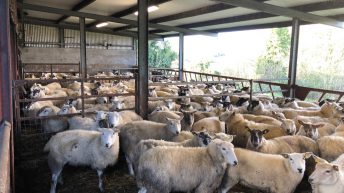 Sheep focus: Scanning 200 ewes in preparation for the lambing season in Co. Cavan