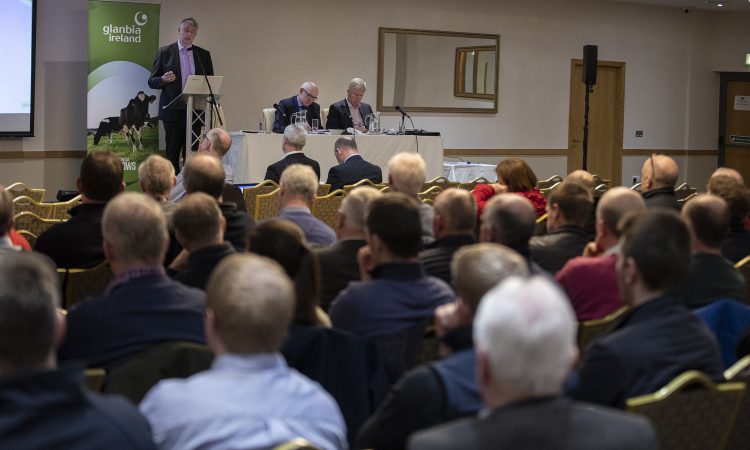 Supplier bonuses, new entrant “contributions” and prospects for milk supply over the coming years were key points of information delivered in a series of regional information meetings that are currently being held by Glanbia Ireland.

In terms of impacts on suppliers’ milk cheques, meeting attendees heard that there will be no capacity charge or levy fro the next phase of forecasted milk growth by existing suppliers.

However, this will not be the case for new entrants from this year.

From 2020, new entrants have a choice on how to make a “capacity contribution”, according to the processor:

Suppliers with less than 250,000L per year are exempt from this contribution, however.

Another key point of interest was that Glanbia Co-op highlighted in 2020 all milk supplier co-op members will receive a 0.4c/L payment each month on all milk supplied as their ‘Share of GI profit’.

It will be adjusted to reflect constituents, the co-op noted.

Meanwhile, as revealed by Glanbia earlier this week, a seasonality incentive has been confirmed with a new Early Calving Bonus and Late Supply Bonus for creamery milk suppliers.

This is aimed to help flatten the milk curve, according to the company.

These bonuses are as follows:
Advertisement

On a broader scale, market outlook, growth, new entrants and the economic footprint from the €1 billion paid to farmers for milk in 2019 were among the topics discussed at the regional meetings.

Glanbia Ireland chief executive Jim Bergin highlighted the growth in the milk pool to 2.9 billion litres in 2019 which has been delivered by farmers with strong economic benefits for their local communities.

Co-op members and suppliers heard milk supply growth in the coming years would be more moderate, with farmers continuing to deliver strong increases in solids.

Bergin explained: “We are very conscious of our environmental responsibilities and so too are our suppliers. Our environmental standards are key to all our plans for the future.”

He highlighted that it was too early in the year to make predictions in relation to the direction of milk price, with many factors currently proving influential, including the devastating fires in Australia, disputes and trade wars.

Overall moderate global milk supply growth was delivered in 2019, which is expected to be slightly higher in the first half of 2020, the chief executive added.

It was noted that a strong emphasis will be placed on driving value-added growth and growing new markets, with over 100 people now working to market GI products in regions including China, US, Middle East and Africa.

Investment was taking place in research and development (R&D) to increase capabilities, with the new €15 million R&D centre in Ballyragget, Co. Kilkenny now approved for planning.

Finally, details of the Glanbia Trading Bonus Scheme for 2020 were discussed.

Having kicked off earlier this week on Tuesday, January 14, the regional information meetings will continue over the coming days until Wednesday, January 29.