Larry has been breeding pedigree ewes since 1988, along with a herd of pedigree Charolais cows.

He is a member of the Belclare Sheep Society and is involved in the Sheep Ireland Lamb Plus programme.

Last year, he won the Sheep Ireland LambPlus award for the highest-achieving flock for 2018.

Telling his story, Larry said: “I have a big passion for sheep farming and I take great pride in my flock.

“Recently, my nephew bought some of my ewes – as I am starting to decrease the size of the lambing flock. I’m getting too old to lamb down big numbers.

“I really believe in €uro-Star values and by breeding 4 and 5-star ewes, I am hoping that this will improve the prolificacy of the flock and increase the profitability of the enterprise.”

Originally, Larry operated a commercial flock. However, after getting involved in the Belclare Sheep Society – combined with his interest in genetics – Larry went down the route of pedigree breeding.

“When I first started breeding pedigree sheep, my mindset was that champion rams would breed the best-quality sheep.

“However, over time, I began to realise that this wasn’t the case and research has shown that the Belclare breed – which has one of the most prolific ewes on the market – has seen its prolificacy drop immensely over the last few years.

“I saw on Twitter recently that a breeder was scanning 1.8 lambs and I was shocked to see it because Belclare ewes are renowned for their prolificacy and are known to scan as high as 2.6 lambs.

“I believe this drop in prolificacy is down to breeders buying champion rams – that are in most cases a single lamb – that don’t carry genes related to prolificacy.” 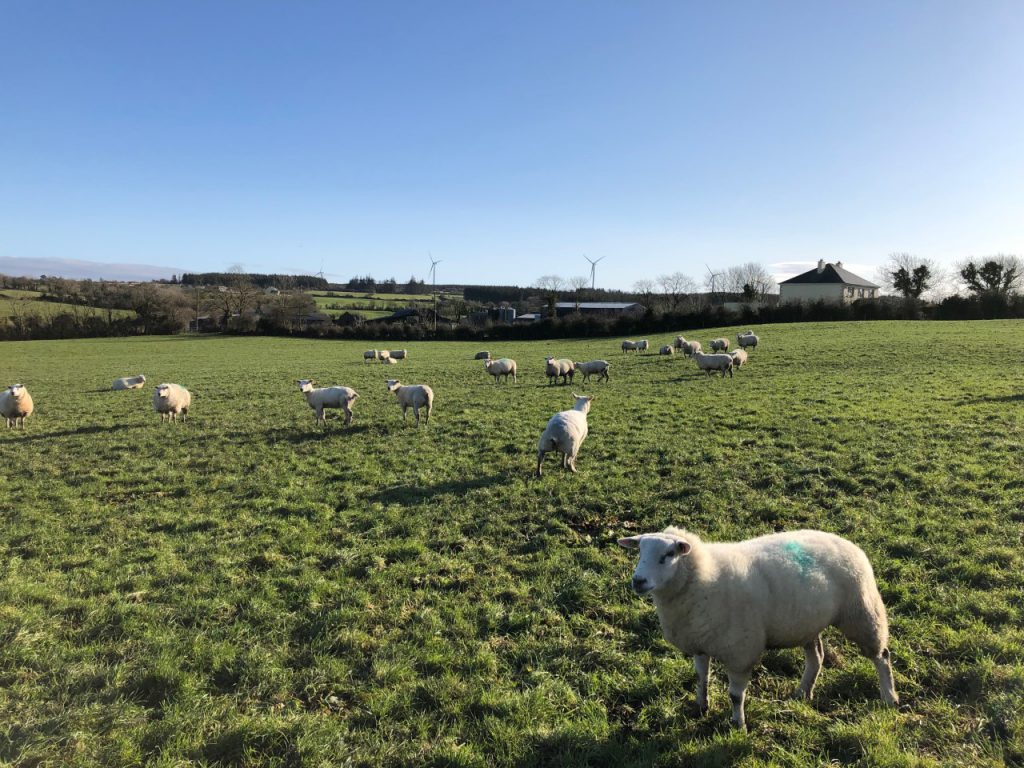 There are many attributes of the Belclare ewe that appealed to Larry, such as: ease of lambing; good vigour at birth; high litter sizes; and good milk production.

“They are a low-maintenance animal and are very easy to manage. The fact that they produce a large number of twins not only increases the profitability of the flock but it also gives me the chance to select prolific female replacements.”

The farm runs a mixed grazing system, with cattle and sheep grazing together.

The farm operates both an early and mid-season lambing system, in order to reduce the workload.

The ewes were housed for the breeding season, with rams servicing ewes indoors – to allow for easier recording of what ewes are bred to which ram.

The ewes are sponged in August to congest the lambing period in January. The ewe lambs are served by a ram in November in order to lamb down in April.

The ewe lambs are shorn before they are bred. Larry believes that shearing ewe lambs helps them grow better while also keeping them clean. 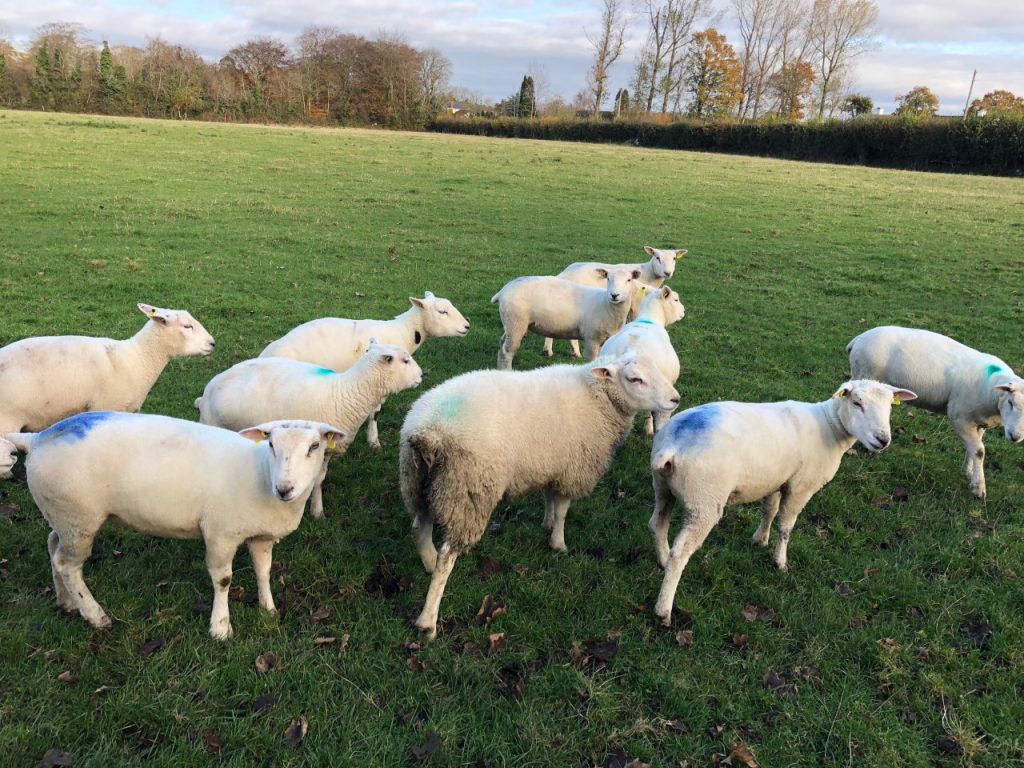 Larry and three other breeders come together every year and buy rams that they rotate between the four different flocks.

“We are always looking for different bloodlines that will work well in our flocks, so we go to different sales across the country and purchase rams that we feel will improve our flocks.”

Larry raddles his rams in order to see what ewes have been bred. Furthermore, if there are any empty ewes, they will join the mid-season lambing flock to be served again – to condense the lambing period as much as possible. 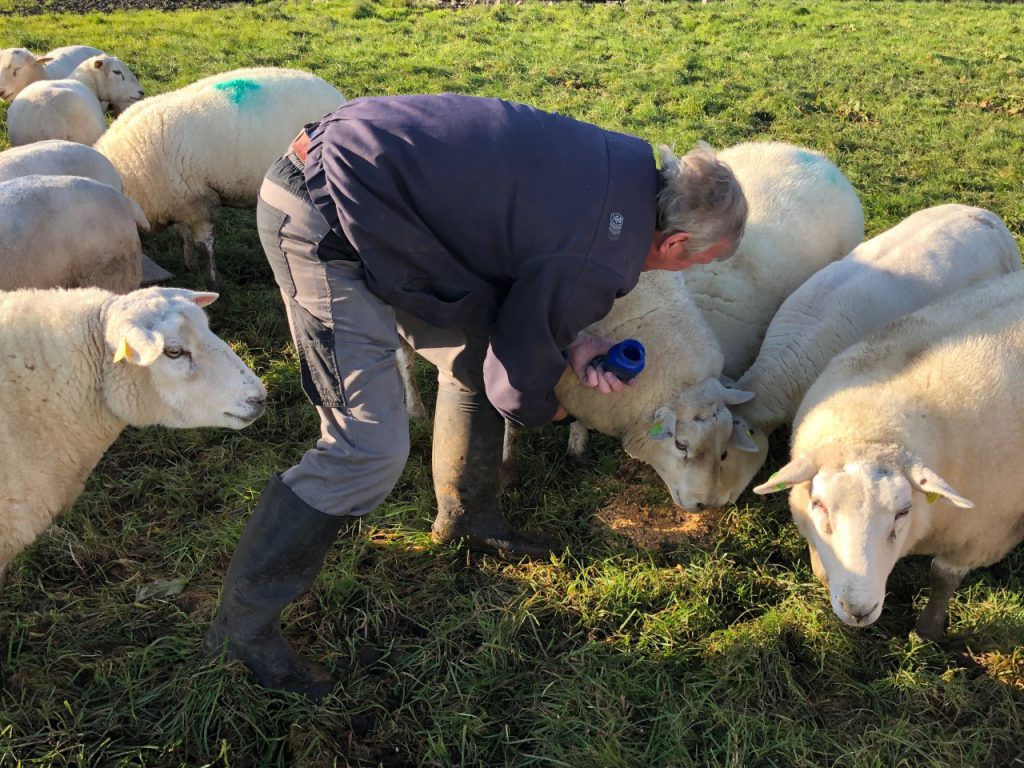 Larry applying a blue-coloured paste, which acts as a raddle on the ram

“I would say, on average, 65% of the ewes have twin lambs; I rarely have any single lambs which is great.”

Every year, Larry culls over a third of his flock; therefore any ewes with 1 or 2-stars are sent to the factory after the lambs are weaned in April.

I don’t keep any ewes with low stars; that is why I keep an up to date record of how many lambs a ewe rears.

“I have decided to cut back on the number of ewes I am going to lamb down next year. Last year, I lambed down 80 ewes. However, this year I am planning to lamb down around 60 ewes.”

To make life easier, he sponged his ewes in August so that he could condense the lambing period and reduce the workload.

This year Larry had over 120 lambs. Depending on the quality, he keeps between 40% and 60% of his lambs for pedigree sales and for breeding.

The remaining lambs – the majority of which are early lambs – are sent to the factory in April after weaning.

Currently, there are 15 ewe and wether lambs that are set to be drafted over the coming weeks. Larry is undecided about whether to keep two or three of the ewe lambs for breeding as they have high €uro-Star values.

At the moment, there are 20 ewe lambs being served by a ram lamb. These ewe lambs and any repeat ewes will lamb down next April. 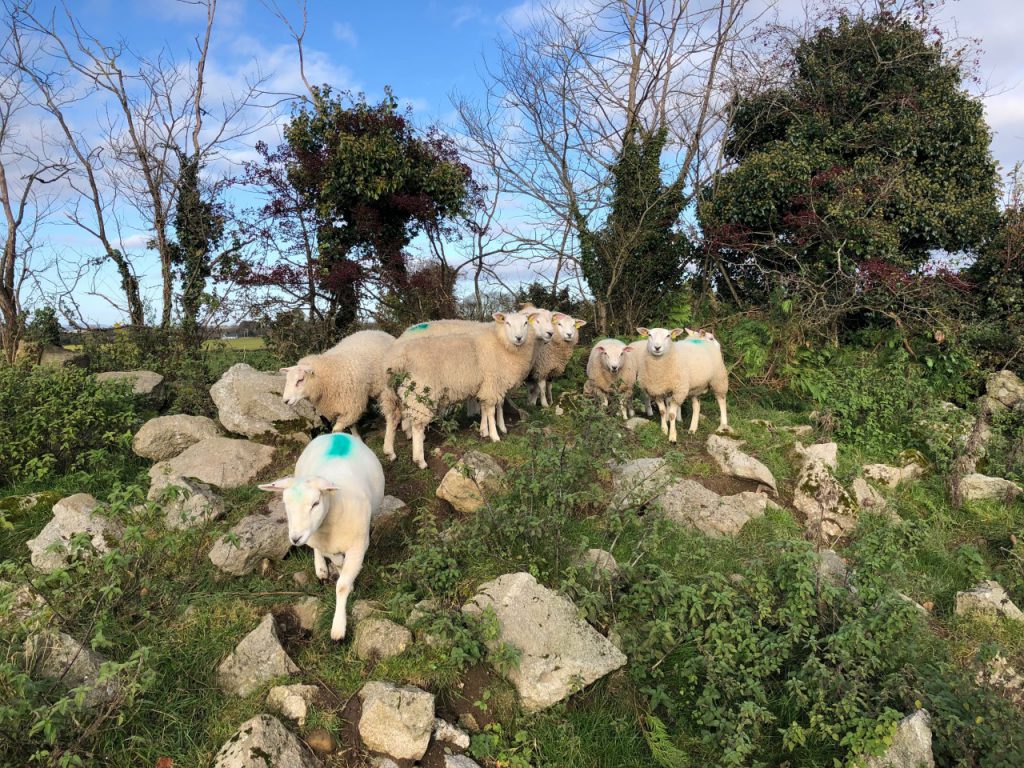 Considering Larry only has 30ac to run his cattle and sheep on, he has to be very efficient when it comes to grassland management.

In order to have plentiful supplies of grass for his ewes and newborn lambs, the lambing period is split in two.

Therefore, by the time the mid-season flock is ready to lamb down, the early lambing ewes will be moved over to rented ground while their lambs will be ready to be sent to the factory.

This, in turn, means that Larry will have grass for his mid-season lambing ewes and their lambs for the summer months.

By the end of August, when the ewes have been sponged and bred indoors, they are moved back to the rented ground, where they stay until housing in December – weather dependent. 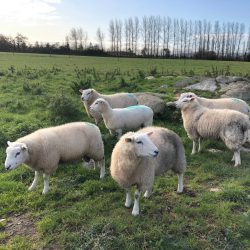 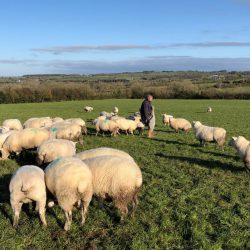 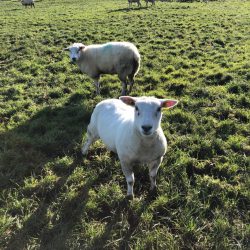 Larry buys all of his winter fodder and believes it is a far cheaper option than getting a contractor to come in and make the silage. The ewes and cows are mainly fed concentrates, with hay supplemented as roughage.

“I don’t have enough land to make my own silage; however, I find it cheaper just to buy in feed anyway. I can source hay quite easily and at an affordable price.

I have plenty of room to store the hay bales and I have two meal bins that can hold up to 4t of concentrates.

“Moreover, I only have a Massey Ferguson 35 which can do the few jobs I need to do such as stacking hay bales and spreading fertiliser.”

Currently, there are 20 pedigree cattle on the farm. When I met Larry last week, he had just housed the cattle for the winter.

“I bed the cattle with peat. I find that it is very good for soakage and it is very low maintenance compared to straw bedding. I put in fresh peat every six-to-eight weeks.” 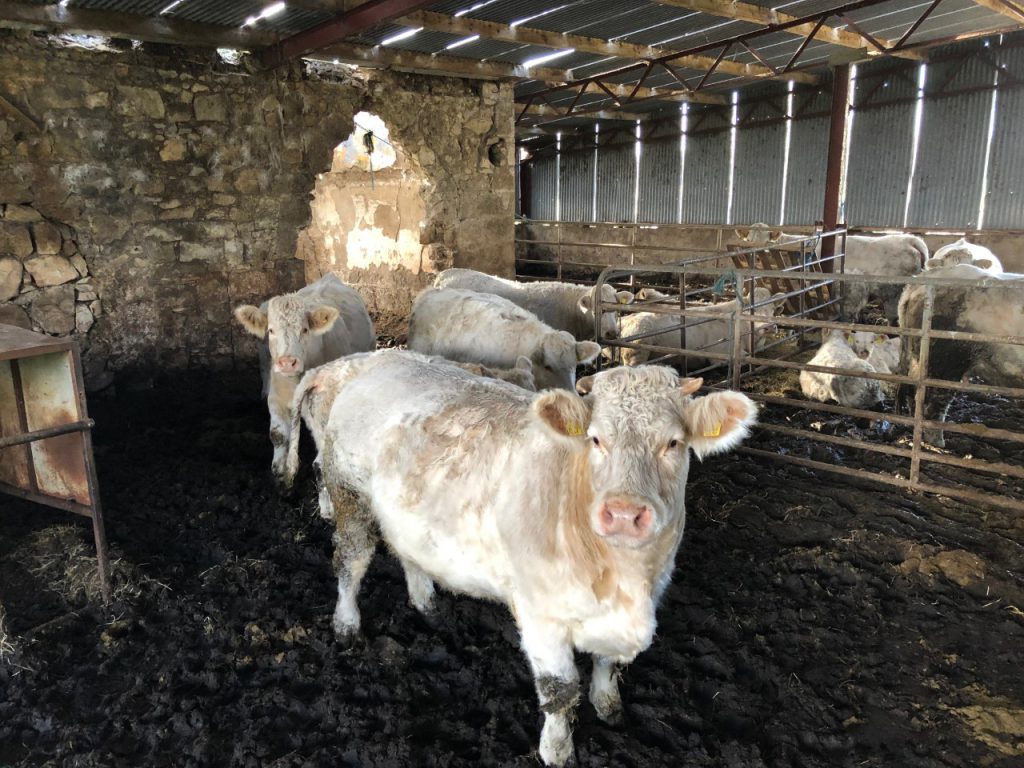