Why is rehydration vital after calving?

Major loss of fluids, combined with the impact of a negative energy balance, can leave cows in a very weak and depressed state in the hours directly after a difficult calving.

At the very heart of this problem lies a combination of factors, including dehydration and a lack of available energy in tandem with a shortfall in the metabolic availability of key minerals and trace elements that the cow desperately needs.

If not resolved urgently, it is a problem that can severely impact the animals’ ability to produce milk throughout their subsequent lactation.

He explained: “The cows started calving on January 20. The season will continue through until April 10 and, so far, it’s been a case of steady as she goes.”

Last year, the Donovan herd averaged 6,300L and 525kg milk solids. The feeding programme included 600kg of concentrate and a similar amount of EornaGold and fodder beet, which was fed until the end of May.

I think this was an outstanding level of performance, given the quite small amounts of concentrate they received.

“We have also been using a combination of high milk and high fertility Friesian bulls over the last number of years. And the impact of this commitment is now paying a real dividend.

“Approximately 100 cows have calved to date and, so far, everything is running fairly smoothly.”

A proactive approach with AHV solutions

One of the real upsides to the 2021 calving season has been the success of AHV Booster Drench Powder and AHV Aspi. Mr Donovan recognises the problems that can be caused for cows in the aftermath of difficult calving. And this year has seen him take a proactive approach in this regard.

Bill explained: “I have been using AHV’s Booster Drench Powder on any cow that looks dull after calving and it comes in a very handy 1kg sachet – meaning each cow is getting the required amount. The product can be quickly made up by mixing it into 20L of lukewarm water and then easily administered to the cow with the drenching pump.

A total of 12 cows have received the drench since the beginning of this year and the results delivered have been more than encouraging.

He added: “All the freshly calved cows are fitted with Moo Monitors. The collars are recording the rumen activity of each animal on a real-time basis. As soon as any problems in this regard are picked up, the cows in question are drenched.

“In all cases where this approach has been taken, rumen function was restored within a very short period of time.”

Bill concluded: “Providing cows with adequate pain relief after a difficult calving is also important. As a matter of routine, I now use the Booster Drench Powder in tandem with AHV’s anti-inflammatory drench, the AHV Aspi.

“Again, the results to date have been extremely encouraging. One particular cow was running a high temperature. The decision was taken to use the AHV Booster Drench Powder and AHV Aspi in combination. Within a very short period her temperature had fallen back to 38.4°.” 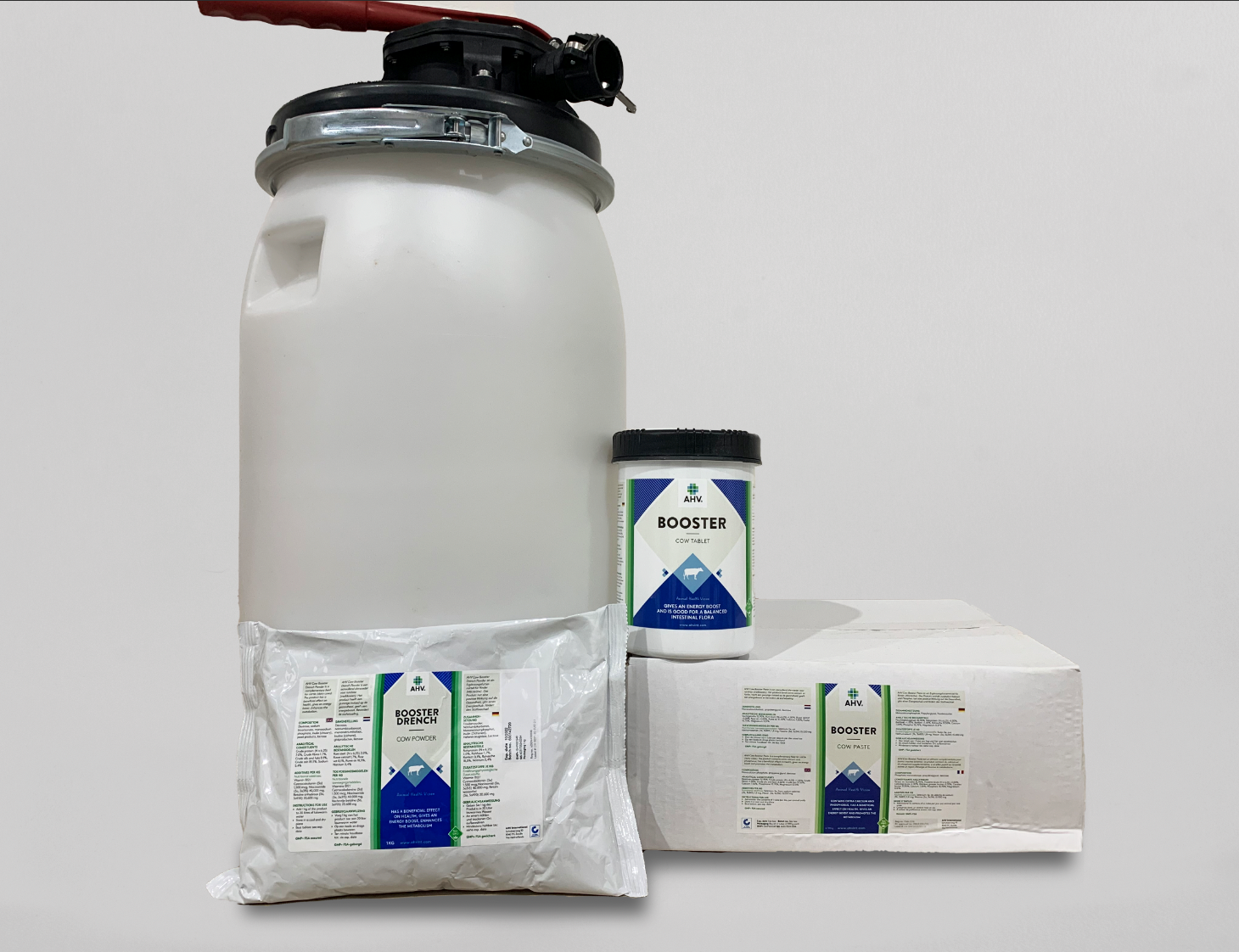 What is AHV Booster Drench Powder?

AHV’s Mick O’Sullivan sheds some light on what the Booster Drench Powder is doing and the benefits of drenching.

“Cows post-calving and in early lactation will naturally be deficient in energy and essential minerals, such as calcium and phosphate. The AHV Booster Powder is designed to replenish these elements and to kick-start the cow’s overall metabolism.”

He continued: “There are many other elements that make up the AHV Booster Powder, one of which prepares the rumen to be more efficient and can adapt to her new diet.”

Mick explained that drenching can also be a very useful tool on a sick cow or cows that may have reduced feed intake.

“The reason being, when a cow is not eating or not eating enough, she is not getting satisfactory energy to support her or her immune system and is more susceptible to ill health.

“With a negative energy balance, she takes energy from her reserves, which means she milks off her back. This is when the farmer becomes the energy source for the cow and it is essential to provide the energy and minerals she needs at least twice or three times a day until appetite and intakes have returned to normal.”

Mick commented: “A cow drenching pump and AHV Booster Powder will be essential pieces of equipment with regard to animal health up and down the country.”

To discuss AHV products and to request a call back, just click here