Rain threatening to return over the weekend

Saturday and Sunday will see rain slowly returning across the country with widespread showers making a return on Monday, according to Met Éireann.

This afternoon, Friday, May 24, will remain mostly cloudy into the afternoon and this evening with just a little sunshine breaking through.

However, the national forecaster has predicted that today will stay largely dry with just a few scattered showers. Highest temperatures today will range from 15° to 19° with mostly light breezes.

Cloud will thicken across the western half of the country tonight followed by some light rain and drizzle.

Minimum temperatures tonight will range from 7° to 10° with light winds.

Saturday will begin rather cloudy with patches of light rain and drizzle mainly affecting the western half of the country.

Cloud will start to break later in the morning with spells of sunshine for the afternoon and evening.

However, Atlantic coastal areas will remain dull and damp overall.

It will be a humid day on Saturday with top temperatures ranging from 16° to 21° in light to moderate south-westerly breezes.

Outbreaks of rain will move in from the Atlantic to affect the west of the country early on Saturday night, extending nationwide later.

However, rainfall amounts will be small. Minimum temperatures will be from 10° to 13° in freshening south-westerly winds.

Rain will clear quickly into the Irish Sea on Sunday morning to leave a bright and breezy day with sunny spells and a few passing showers.

Highest temperatures on Sunday will range from 15° to 18° in moderate to fresh westerly breezes with scattered showers and some prolonged in the north. Lowest temperatures will reach 7° to 10°.

Monday morning will see widespread showers with some heavy and prolonged.

Feeling cooler with highs of 12° to 15° in blustery north-west winds. 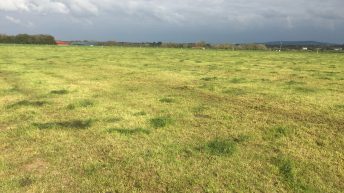