Northern Ireland’s Minister of Agriculture Edwin Poots has refused to accept a decision made by an environmental quango to lower the ammonia threshold for agricultural planning applications in the region.

Rows over environmental planning requirements have long been a thorn in the industry’s side – particularly with regard to stringent ammonia thresholds.

It’s understood that at one point more than 160 agricultural planning applications were stalled, with some farmers having spent as much as £20,000 on the process to no avail.

‘Stopping planning is not the solution’

“Steps taken in the absence of the Assembly have led to many planning applications stopping because of ammonia emissions and because of the decisions taken by independent bodies,” Minister Poots told UFU members.

“I think we need to reflect on this going forward. I get calls all of the time in the Assembly that they want more independent bodies to deal with environmental issues, but we have an independent body that exists now [SES] that has stopped the planning process and we are working to get that changed and working to get a way through on that.

Just stopping planning isn’t going to deal with the problem of ammonia – we actually need to address the problem. Identify how we can make things better, and go after that low-hanging fruit.

“I know that farms will co-operate because they have co-operated on so many things over the years and we have better systems as a consequence of that.

“We shouldn’t be competing with commodity markets for our products if we are producing some of the best produce anywhere in the world – and we are.”

Why are agricultural planning requirements so tight?

The group is based at Mid and East Antrim Council’s offices at the County Hall in Ballymena, with its primary responsibility to carry out Habitats Regulations Assessments on planning applications and advise on impacts on Special Areas of Conservation (SAC) and Special Protection Areas (SPAs).

In 2019, the group was accused of ‘moving the goalposts’ after it changed its already stringent ammonia threshold from 1% to 0.1%. 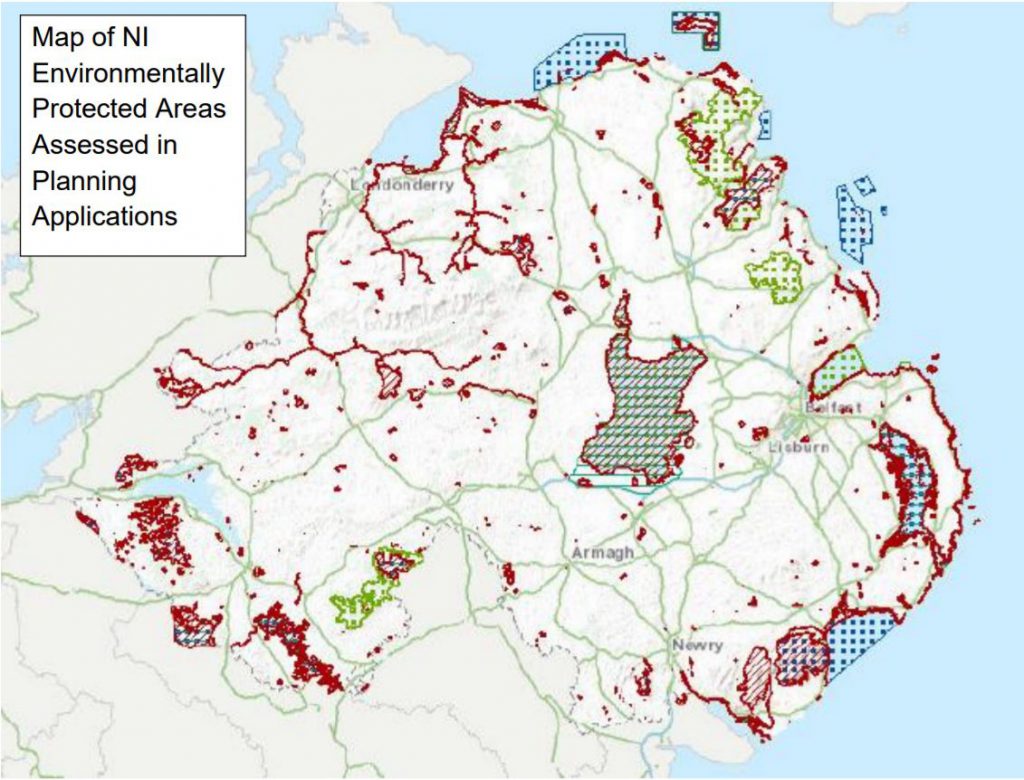 It meant that if a farm business is sited within 7.5km of certain designated sites (shown above), its application was likely to be denied.

However, this resulted in what insiders described as a “period of limbo” for agricultural planning applications.

Responding to a question from the audience, Poots said: “I have written to the SES last week indicating that we should be operating on a 1%, as opposed to a 0.1%, threshold and that will create the opportunity for many more planning applications to be achieved.

“I did that on the basis that we will be bringing forward an ammonia action plan, and therefore, we will be doing things that will be reducing ammonia [emissions].

“As indicated in my speech, stopping things going forward will not achieve what we need to achieve on ammonia.

In terms of independent bodies, I happen to think that you are better to have people who are elected to positions that you can remove if you don’t like the decisions they make, rather than organisations which can make decisions where there is absolutely no accountability.

“Without vision, the people perish and we need a vision for agriculture and agri-food and that’s not my vision or DAERA’s [Department of Agriculture, Environment and Rural Affairs’] vision or the UFU’s vision – that’s all of our vision,” he added.

“I’m a production man – I want to see food produced on our land.

“On our hill farms, I want to see calves and lambs growing – not gorse and whins. I want to ensure we can take the right steps and do the right things to ensure farming works in conjunction with the environment as we develop new schemes…”