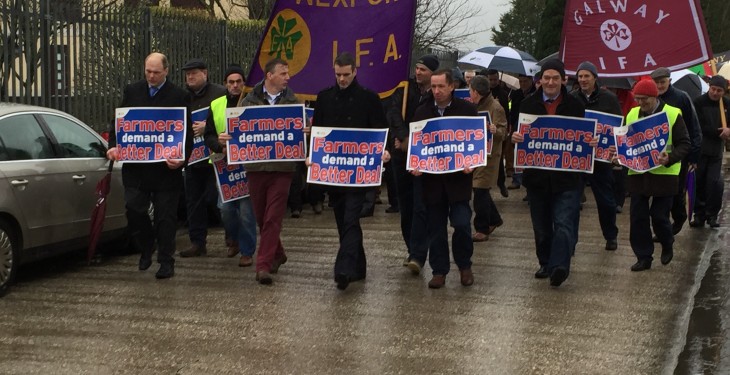 Over 800 farmers attended an IFA protest at Slaney Foods in Co. Wexford today, over what it says is a lack of competition in the beef processing sector.

Addressing the large crowd at the protest, IFA’s National Livestock Chairman Henry Burns said that farmers are “sick and tired of the lack of competition” and the impact it is having on the beef sector.

Farmers, he said, are demanding a better price for their cattle and fair and open competition, which is being denied to them.

He called on the Minister for Agriculture Simon Coveney to “get stuck in and tackle the lack of competition that has plagued the Irish beef sector for years”.

Burns said livestock farmers have real fears and concerns around competition and dominance in beef processing as well as rendering, and the proposed sale of the Allen family 50% share of the Slaney/ICM business to ABP.

“This investment would give ABP effective control on up to 29% of the beef kill and three of the six rendering plants in the country.”

Burns also said that weight cuts have been implemented across the board in recent weeks.

“There is a lack of competition on this island and that is why we are here today. We do not want that to get any stronger. Competition is huge issue,” he said.

“We are sending a message to the Minister, our information is very clear from the competition authority. The Government can make a submission on the basis of the importance of the best industry.

“It is important that it happens,” he said.

Also speaking at the Slaney protest, IFA Rural Development Chairman, Flor McCathy said that current practices in the beef industry are unsustainable, due to the influence of the cartel that exists.

Today is only the first step on the road to get a fair price and competition for our beef industry.

He said that the Irish beef industry is unsustainable at the moment and if the lack of competition continues beef farmers may be forced to close their gates for good.

Joe Healy, the Galway IFA presidential candidate also spoke at the Slaney protest and told farmers that if the Slaney/ABP deal goes through it will mean that Larry Goodman will have a hand in 31% of the beef kill, 40% of the sheep kill and 50% of the State’s rendering capacity.

Healy said that if these figures were not a worry for the Minister for Agriculture, then farmers are in real trouble.