No water and a fodder deficit on a dairy farm in Co. Wicklow 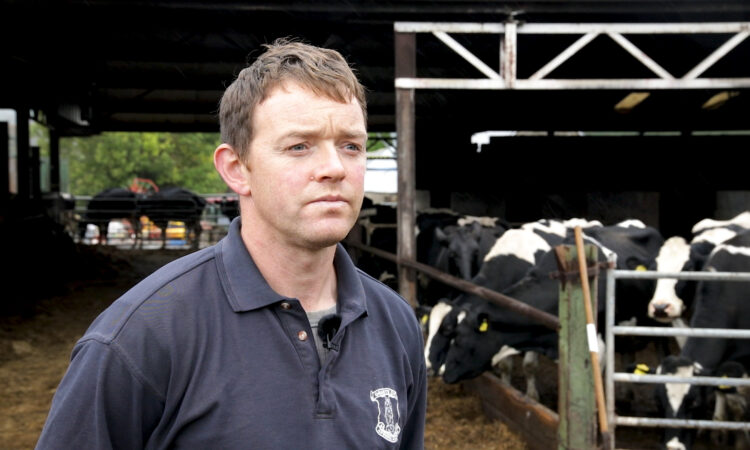 The effects of the summer’s drought are still very evident around the country. Fodder remains in short supply and water was also scarce on this Co. Wicklow farm.

This week FarmLand visited Shane O’Loughlin who farms just outside Aughrim in Co. Wicklow. The springs that supply water to his farm have dried up and he has been transporting water every day from a local river for the past two weeks.

He has completed his feed budget for the winter. Second-cut silage was reduced from 45ac to 5ac, and a large proportion of his beet crop didn’t strike. Wholecrop and Westerwold ryegrass will fill some of the gap, but meal and straw will stretch supplies.

“We did a feed budget six weeks ago and, based on a five month winter, we’re about 10% down; depending on the spring, we’re not too bad. We should be there or thereabouts. If we get a dry autumn and keep some of the younger stock out later, we should be okay,” Shane explained.

We grow some beet. We had a terrible crop this year and some of it didn’t germinate for four months after it was sown, which was a bit of a surprise.

“The beet was grown primarily for the autumn calvers and, even with the reduced crop, we should have enough to see us through. We have a little bit of wholecrop, which we don’t normally grow, but we did this year. It’s a small crop, but it will help as well.

“When the wholecrop was taken off we went in with Westerwolds. We direct drilled in straight after and, while it took a while to get established because the ground was so dry, they seem to have worked out. We hope to get some bales off that crop some time before the end of October, whenever the land holds up and the weather is right. We’ll let it bulk up a bit.”

Shane brought in his autumn calving cows to save grazing ground.

“The dry cows were kept in. Normally the autumn calvers are left out on grass for the autumn, but this year, when we dried them off, we kept them in just to save the ground so we might be able to keep a bit of grass for the younger stock.”

Shane is spending a lot of time and diesel drawing water to his animals, as the springs have dried up on his farm.

“The yard here would be supplied by springs that we harvest and pump around the place. Normally they would slow down a little bit in the autumn, but they slowed down very early in the summer and dried up completely about two weeks ago; so we’re drawing all the water from a local river to keep the farm going.”