Mobile farm reaches out to schools and nursing homes 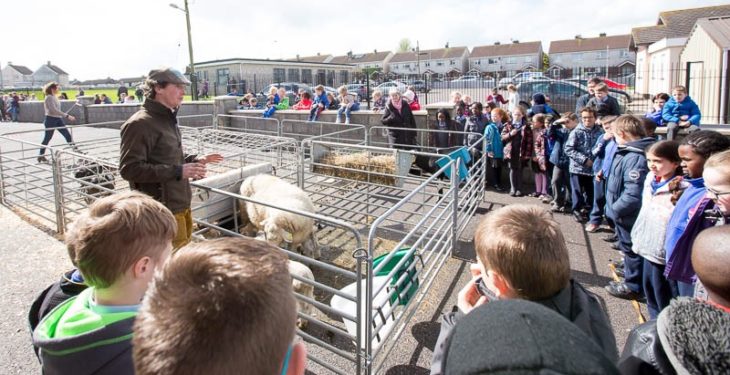 Eoin Sharkey spends a lot more time than the average farmer on the road. For much of that, he is accompanied by a motley crew of his farm animals, ranging from pigs to a milking cow.

It’s all in a day’s work for his mobile farm which travels throughout the country.

Sharkey’s aim is to connect primary and secondary school children, as well as special needs children and nursing home residents, with farm animals and farming life. The educational facility visits Castletown House, Co. Kildare, every weekend for the summer – and provides an interactive element to food festivals throughout the country. The Castletown visits have just been extended to Sundays in September.

Sharkey runs a mixed farm, Maperath Farm in Co. Meath, mainly focused on rearing premium Bronze turkeys and geese. He currently has 800 turkeys and 300 geese. Certified free range, they will be ordered in advance and collected at his farm shop which opens in the days leading up to Christmas at the family farm just outside Kells.

They are also sold through: some Avoca shops; Fallon & Byrne; and a few butchers. Sharkey has also supplied Richard Corrigan’s Virginia Park Lodge. In broadening the Christmas enterprise, he has now planted Christmas trees which will be harvested in the years to come.

Because that business is very seasonal, I started the mobile farm. I mainly travel to primary schools, but have also been to some special needs schools, where the pupils benefit greatly from getting close to the animals and smelling and touching them. They really enjoy the sensory element of the experience.

Children and people in general are now often disconnected from the land and the source of their food, Sharkey finds. “Even children who live on farms may not have seen a lot of animals, because farming is so specialised now. One dairy farmer’s daughter I came across had never seen a pig in her life.”

“Sometimes urban children may have only ever visited these animals with their parents at the zoo or at open pet farms, but I don’t like to think of my farm as a petting farm. It is more of an educational experience which is interactive and fun too of course,” he said.

“The animals I bring with me are all productive farm animals. I give a half-an-hour’s talk aimed at the different levels, from junior infants up to senior students. It is also suitable for Transition Year students or those studying Agricultural Science. So the talks could vary from the different types of animals to calf tags, which the children are amazed to learn hold more information than a passport, with all the DNA of the animal,” he said.

“My aim is to educate children on where food comes from. I set out to present the big picture of the animal’s life, not the last two seconds, which some pupils want to focus on. I assure them that the animals are treated humanely, that a vet is there, and that food production demands a lot of rules and regulations to ensure that animals are treated well.

Schools are delighted with the experience, as it ties in well with their curriculum in an interactive live way.

Nursing homes are also serviced by the mobile farm. “A lot of the residents have grown up on farms, and it bring back great memories for them. It is especially effective for Alzheimer and dementia sufferers. Seeing the animals gets them telling great yarns of the old days.”

The mobile farm, which takes the form of a triple axle 14ft double decker trailer and is equipped with a water supply and camera, also calls to festivals. They include the Dingle Food Festival, and Galway and West Waterford festivals.

The animals are displayed in pens with explanatory panels or on astroturf on streets to facilitate easy interaction. Sharkey, in keeping with his sustainable ethos of food production on the farm, showcases rare native Irish breeds of animals. The mobile farm comprises varieties of: hen; sheep; goats; turkeys; geese; ducks; pigs; and a milking cow.

“Interaction is the key and the questions often amuse. Children often ask if our Dexter brown cow produces chocolate milk,” said Sharkey whose TV work has included ‘Big Week on the Farm’. 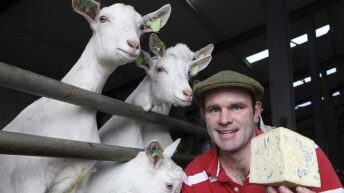