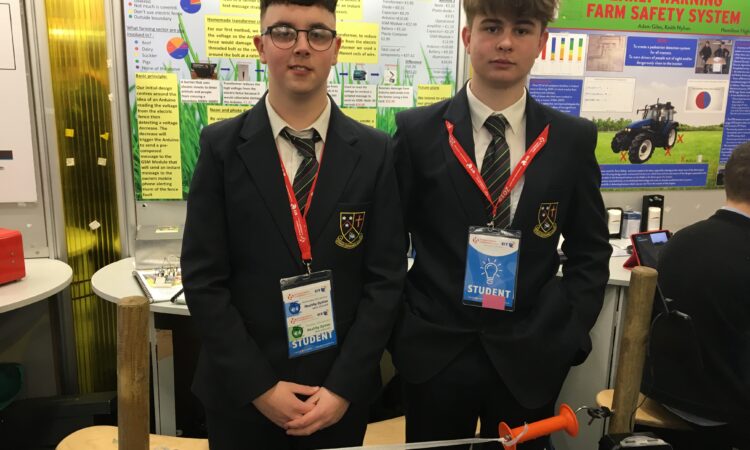 Chris Kerrigan and Stephen Kelly entered the contest for the first time this year with their electric fence low-alert project. It sends out text messages if the electric fence is not working or has low voltage.

Said Chris: “When I was on holiday over the summer, we left the heifers out in the field and thought that they would be grand for three days. On returning home, we found the electric fence broken and our cattle grazing in the neighbouring land.

I remember thinking that there must be a device that can alert you that your fence was broken. I looked around and found nothing. Stephen had a similar experience on his farm.

“I knew the BT Young Scientist and Technology Exhibition was coming up and when I returned to school, I partnered up with Stephen to combine our technology and farming experiences to try construct a device that would send an alert to your mobile phone when a fault occurs.”

Both students live on their family’s farms. “My father and I fatten weanlings that we buy in. We keep them for around two years and send to the Kepak factory in Tullamore before they reach 30 months. We generally keep Charolais, Limousines and Blondes,” said Stephen.

Stephen, his father and his grandfather buy weanlings in and rear them for a year and sell them on again in Ballinasloe Mart – generally continental heifers.

“We spent many extensive hours researching problems that can occur when electric fences are broken; for example, breakouts and also theft, and their consequences.

Theft of livestock has risen in recent years, especially in rural Ireland. When livestock are being stolen, the electric fence is being disconnected to enable thieves to take livestock. Our device will give you an opportunity to get to the scene or alternatively call An Garda Siochana.

“We also had to research the correct components to do the job in our circuit. An electric fence, depending on strength, can have between 2,000 volts to 5,000 volts.

“We had to bring this voltage down to read it, so we constructed a homemade transformer,” he said.

“We found that we should send the alert via SMS as opposed to designing an app or sending an email. Many from the older generation don’t have smartphones or internet. Although we may develop an app in the future, we are using a text message at this time,” the Moate students said.

We plan to get our product produced professionally and available to all farmers throughout the country as soon as possible.

“It is possible to make a similar system with the same principle of a text alert for farm gates and house doors.”

Chris and Stephen said they really enjoyed working on their project. “We learned so much from laws relating to cattle on public roads to coding Arduino.

“We worked really well as we both had the same aim  – giving farmers peace of mind in ensuring their fence is working efficiently and their animals are safe in their field.”

The feedback at the exhibition, they said, was very encouraging. “We had great reaction from the judges because of the device’s practicality and also its unique design. There were also lots of brilliant reactions from members of the public, especially those from farming backgrounds.” 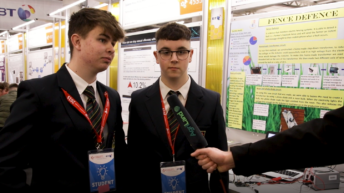