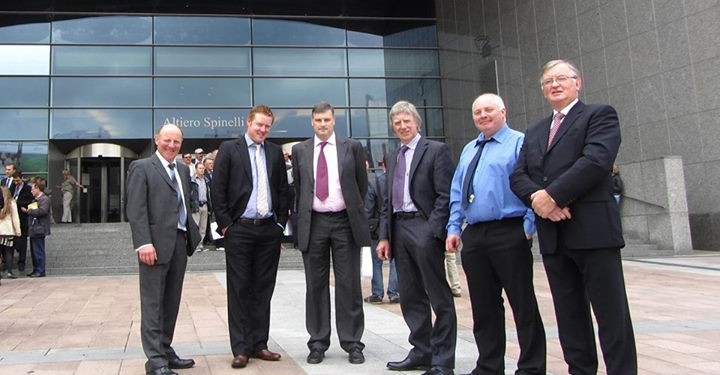 North-West MEP Jim Higgins is hosting the Irish Cattle and Sheep Farming Association’s from Farm to Fork Agri Exhibition in the reception of the European Parliament this afternoon where on average 10,000 pass by each day.

The event coincides with the conclusion of both the Irish Presidency and the Common Agriculture Policy (CAP) negotiations.

“The CAP accounts for 85 per cent of Irish EU funding, guaranteeing over €1.5bn per year for Ireland.  However we need to ensure this is distributed in a fair manner – one which protects active farmers and makes farming a real career choice for our young.  At present only 7 per cent of Irish farmers are under 35 years of age and 25 per cent are over 70 years.

“I have sponsored a North West ICSA delegation, with participants from Donegal, Galway, Mayo, Cavan and Monaghan, to partake in this event.  The farmers will meet key policy makers to discuss the new CAP and the impact the proposed changes will have on their farms and families.

“The ICSA delegation will put a human face to the Irish agriculture industry.  It’s an opportunity to highlight what works in the Irish AGRI industry and what areas need extra assistance.”

The exhibition will take place from the 24-28 June and will co-inside with the last agriculture European council session of the Irish Presidency.

“It is very important that the Irish agriculture sector remain as visible as possible during this time, this council session is absolutely crucial as the outcome will be a new CAP. This is exactly the type of international exposure that the Irish agricultural industry needs.  The Irish Presidency places Ireland at the centre of EU decision-making and I’m using that opportunity to push for a fairer CAP for the people of the North West of Ireland,,” the MEP added.

Meanwhile final CAP Reform negotiations are under way and nearer conclusion. Speaking to reporters Minister Coveney indicated a minimum payment of 60 per cent for the ‘landing zone’ is on the table, which equates to a minimum payment of €150 to €160per hectare by 2019 and this would see €103m being redistributed.

The average gain would be 35 per cent and the average loss would be 12 per cent with no farmers losing more than 28 per cent of their payment. According to the IFA, this would see 60,000 gain and 50,000 farmers lose.

“Some 50,000 of our most productive farmers will lose between 15 per cent and 35 per cent of their overall payment by 2019, which will have a serious impact on farm incomes and viability. Any cuts must be imposed over the longest time-frame possible,” the IFA President John Byran said in a statement today.

CAP Reform negotiations are set to continue today and tomorrow.