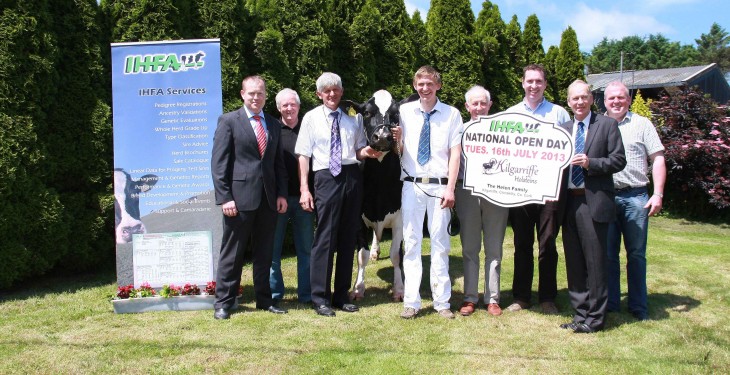 The Irish Holstein Friesian Association (IHFA) National Open Day 2013 will be held on the Kilgarriffe herd of Richard, Marion and Mervyn Helen and family near  Clonakilty, Co Cork on Tuesday, 16 July.

The Helen family have been farming at Kilgarriffe since 1954. The total area farmed is 200 hectares. Richard and Marion took over the farm from Richard’s parents (Richard Senior and Bella) in 1982. However they remained actively involved in the farm for many years. All of the younger generation (Mervyn, Andrew, Wendy and Avril) have been actively involved on the farm since childhood, with Mervyn returning home to farm alongside Richard and Marion after completing a degree in agriculture.

When Richard and Marion took over the farm the dairy herd was at 60 cows. Liquid milk is supplied to Clona Dairies and they also supply milk to Lisavaird Coop for cheese manufacture by Carbery. This autumn and spring calving herd (50:50) is now at 200 cows on a milking platform of 60 ha. Average yield last year was an impressive 9132kgs at 4.06 per cent butterfat and 3.35 per cent protein. The Kilgarriffe herd of Holstein Friesians has won many awards at local and National shows. Bulls used in recent years include Shottle, Oman, Seaver, Doberman, and Shout.

As one would expect grassland management on the farm is first class and 20 per cent of the grassland is reseeded per annum. Grass is utilised fully in the herd’s diet. A high proportion of the feed required  for its high yielding herd comes from grass, home grown forage (grass and maize silage), cereals (whole cropped or combined) and fodder beet. They do all their own machinery and forage work with the aid of only two part-time workers.

The Helen family have won numerous awards in the Cork Holstein Friesian Breeders’ competition over the years.  These awards included First Place for the Best Family in the 2009 Premier Section. In the 2010 Premier section they had the Second Place Best Calved Heifer and in the 1998 Premier/Elite Section they also won the Best Breeders Herd (Over-60 Cows category) for home bred cattle.

Mervyn represented Clonakilty in the Macra Dairy Stockjudging Finals in 2011 which was held at the IHFA Open Day in Wicklow. Richard has won many prizes through the years- in 2012 he won the Senior Stock Judging Cup presented by the Cork Holstein Friesian Breeders Club

Avril was a member of the award winning Cork YMA team at the IHFA Open Day in 2010. She has been twice awarded Cork YMA Club Person of the Year.  All the family compete regularly at the Cork Holstein Friesian Club field evenings

Jerseys were purchased in 2005 as a hobby breed and Kilgarriffe is home of Braymeadow Junos Mickie EX94, the highest classified Jersey in the Republic.  She was also five times Champion at the National Spring Fair and at Emerald Expo.

IHFA chief executive Charles Gallagher, said that the Open Day is “a major highlight” in the IHFA calendar of events. “It is recognised across the IHFA membership as an enjoyable social outing and an opportunity for breeders to meet up and discuss the topics of the day. Kilgarriffe, being a top class herd with first-class management, using modern technology and services from IHFA, pedigree registration and classification is a fitting location for this year’s IHFA Open Day.”

IHFA President John O’Flynn said  he looked forward to meeting IHFA members from across the country.

Chairman of the Cork club, Robert Shannon, said that it was an honour for the Helen family and for the Cork club that Kilgarriffe is host of the IHFA Open Day 2013. Robert said there was now a great sense of anticipation in the lead-up to 16 July.

The IHFA Open Day consists of Interclub stock judging and presentation of the National Herds Competition results. Other presentations include the Gold and Diamond Awards for individual cow performance.  Macra Na Feirme and the YMA (young members association), also host their stock judging on the day. Everyone is welcome on 16 July.

The farm is located on the R588, three miles from Ballinascarthy off the N71 Clonakilty – Bandon road. For further information on the IHFA open day please check out www.IHFA.ie