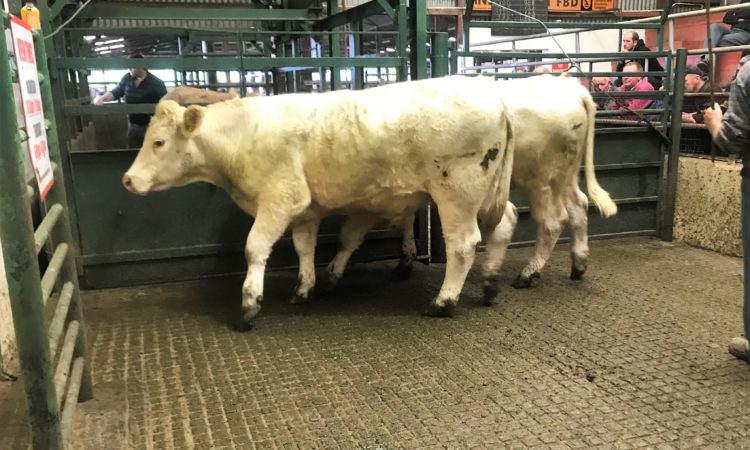 From speaking with mart managers and indeed farmers in recent days, it is clear that both suckler farmers and finishers are proceeding with an air of caution when it comes to purchasing stock.

And why wouldn’t they? With poor prices on offer in the factories and with a lot of uncertainty surrounding Brexit, farmers are playing the waiting game to see what the next couple of weeks throw up.

The mart trade has remained sluggish since the turn of the year and the number of cattle presented for sale is still on the small side.

The continued grass growth and mild weather has farmers thinking about buying cattle for grass. However, these too are proceeding with caution as who can forget the spring of 2018.

On the other hand, a number of calves are beginning to come on stream as we enter in the third week of January and the number of these animals is set to accelerate in the coming weeks and months.

Despite the uncertainty, mart managers – in some parts – have noticed an improvement in price for lighter, store cattle.

Some 630 cattle went under the hammer in Carnew Mart, Co. Wicklow, on Saturday last. David Quinn, the mart manager, said that there were more farmers in the market for cattle.

In addition, exporters gathered around the ring and were in the market for quality heifers and bull weanlings.

Furthermore, a number of calves were also presented for sale; some sample prices are listed below.

240 cattle were presented for sale at Castlerea Mart, Co. Roscommon, on Thursday last, January 10. According to the mart’s manager, Brendan Egan, younger stock in particular recorded the best improvement in price with a strong demand.

He said: “The bullocks and heifers recorded good clearances also, while in the weanling rings – even though the numbers presented were small – demand was improved.”

Furthermore, springers made €710-1,300/head, while a number of dry cows also went under the hammer at the Roscommon-based venue.

Again, like other marts dotted across the country, young calves are beginning to come on stream. On the day, calves sold for €150-370/head, while runners sold at €400-745/head.

Last Thursday’s sale (January 10) in Raphoe Mart, Co. Donegal, featured a “good” entry of cattle at the first sale of the year at the venue, according to the mart’s Anne Harkin.

“All buyers returned to the ringside and quality cattle remain the most wanted and easiest sold, while Friesian types are the most difficult to sell,” she explained.

Kilkenny Mart’s auctioneer George Candler outlined that the trade was “solid rather than spectacular” at the mart on Thursday last, January 10.

George highlighted that cull cows and heifers were the easiest sell, while quality animals were few and far between.