Map: TB on rise with rates now at highest level since 2012

The occurrence rates of bovine TB (bTB) is at the highest level in Ireland since 2012 and shows a “gradual ongoing increase” in bTB incidence in recent years, according to the Department of Agriculture, Food and the Marine.

Announcing the national bovine TB statistics for the second quarter of 2020, the department revealed that on June 28, the rolling 12-month herd incidence for bTB was 4%.

This is the highest level of bTB in Ireland since 2012, and continues the trend of a gradual ongoing increase in bTB incidence in recent years, the department noted.

While levels are still considerably lower compared to pre-2012, it is clear that significant additional efforts are needed by all stakeholders to arrest and reverse this recent pattern, the authority said. 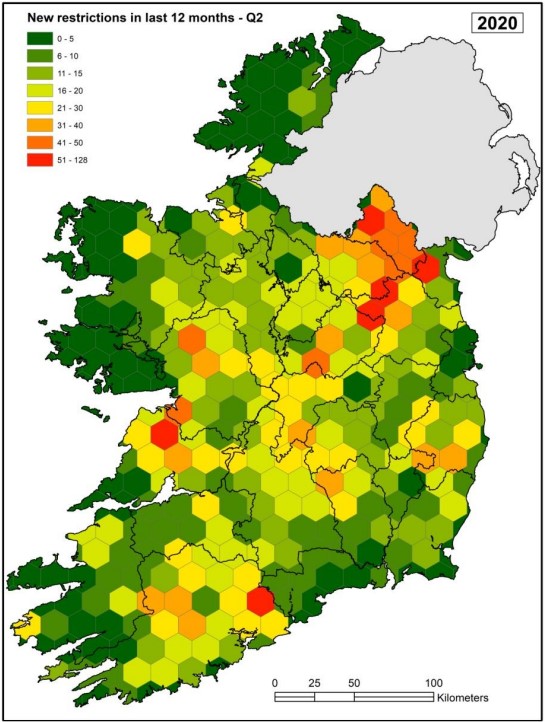 Bovine TB levels in many areas overall are low but there are areas with higher levels of  bTB in the north-east of Ireland – including counties Monaghan, Cavan, Louth and north Meath – as well as parts of Clare, Cork, Tipperary, Wicklow, Offaly, Westmeath and some other districts.

The number of reactors identified through a combination of skin testing and gamma interferon blood testing (GIF) in the 12 months up to the end of the second quarter 2020 was 19,285.

In commentary on the matter, the authority said that rising herd incidence and reactor numbers are of concern to all stakeholders.

Senior Department of Agriculture, Food and the Marine officials at policy and operational level are closely reviewing national and regional trends in order to determine the main factors influencing these changes, it was added.

In addition, the department noted that “continuing cooperation between farmers, private veterinary practitioners and department officials will be required to take action to reduce disease spread and target more effectively the high-risk factors associated with bTB transmission in order to bring disease trends back on a downward trajectory”.

On a regional level, the department provided further details.

A targeted ‘High Impact bTB Control Plan’ is in place in Monaghan and parts of Cavan and Clare, which has been implemented in collaboration with stakeholders.

Wicklow west, Wicklow east and Louth have the highest herd incidence when compared to the national 12 month rolling average (4%). However, these regions combined represent 2% of the national herd.

Meath, Westmeath, Cork North and Tipperary North have had a marked increase in herd incidence in the second quarter of 2020 when compared to the first quarter of this year.

Finally, Mayo and Donegal had the lowest 12-month rolling herd incidence at 1.96% and 1.98% respectively.

Farmers 'must be supported by government' to prevent work accidents