A man is his 60s has been left in a critical condition following a crash between a lorry and a tractor close to Omagh, Co. Tyrone, according to police.

The two-vehicle road traffic collision happened on the Curr Road, near the road’s junction with the Killadroy Road, on Saturday (January 23).

A spokesperson for the Police Service of Northern Ireland (PSNI) said the incident was reported to police at around 12:50pm.

She said: “Police investigating have appealed for witnesses or dashcam footage and [are] appealing for anyone who was travelling on the Curr Road on Saturday and who witnessed the collision, or captured any footage on dashcam which could assist the police investigation, to contact local officers in Omagh on 101 quoting reference ‘736 of 23/01/21’.”

It’s not clear which vehicle the hospitalised man was travelling in. 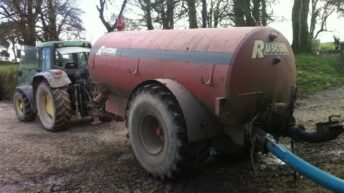 Make children’s safety a priority during the 2021 slurry season