Police in Sussex arrested the passenger of a suspected stolen car after he fell “neck-deep into a pit of slurry” after a police chase.

Sussex police stated that their officers “were covered in cow poo” after they rescued the man from the pit and placed him into custody.

“This passenger of a stolen car thought he could get away, but it turned out not to be his lucky day.”

Eager to evade and fleeing in a hurry, the suspect was eventually arrested, neck-deep in a pit of slurry.

“Thanks to determined officers a rescue ensued, and they all ended up safe, but covered in cow poo.”

In other farm incident news, a man has been airlifted to hospital after suffering serious head injuries in an explosion on a farm in Porthcurno in Cornwall.

Emergency services were called to the scene yesterday morning (December 1) after a reported explosion on the premises.

Police and the ambulance service arrived to the incident and the coastguard helicopter was called to transport the victim to hospital.

A spokesman for Devon and Cornwall Police said:

“Police were informed at around 10:30am [yesterday] morning of an incident at a farm near Porthcurno.

A worker was taken to hospital via air ambulance with serious head injuries after what appears to have been the result of an object combusting.

“Enquiries are being conducted into the circumstances of the incident. The Health and Safety Executive is being informed.” 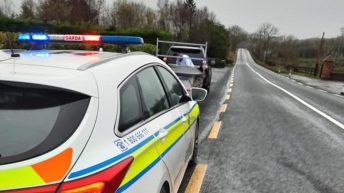 4X4 drawing trailer seized by Gardaí with court to follow