A new so-called ‘decision support tool’ to aid in culling and retention decisions of dairy cows – namely C.O.W. (Cow’s Own Worth) – was launched by the Irish Cattle Breeding Federation (ICBF) and Teagasc yesterday.

The launch took place at the Paddy O’Keeffe Innovation Centre, Teagasc Moorepark with a line-up of speakers feeding into the day’s event.

The CEO of the ICBF, Sean Coughlan, chaired the session. The event was also attended by pilot herd farmers that participated in the development of the new tool.

It was highlighted by the participating farmer speakers that data recording, such as milk recording, really “proved its worth”.

C.O.W. is a new online support tool that ranks dairy cows on their expected future profit potential based on the most up-to-date information available, according to its creators. Farmers can quickly identify under-performing cows, choose cull candidates and keep the most profitable cows in the herd.

This, says the ICBF, has the potential to improve overall herd profitability.

The initial research for the C.O.W. project took place at Teagasc Moorepark in collaboration with the ICBF and AbacusBio Ltd.

Results from the study showed that C.O.W. was able to rank cows in order of most profitable to least and, thereby, identify under-performing cows in the herd. The ICBF developed this research further and apparently trialled C.O.W. on approximately 200 herds. 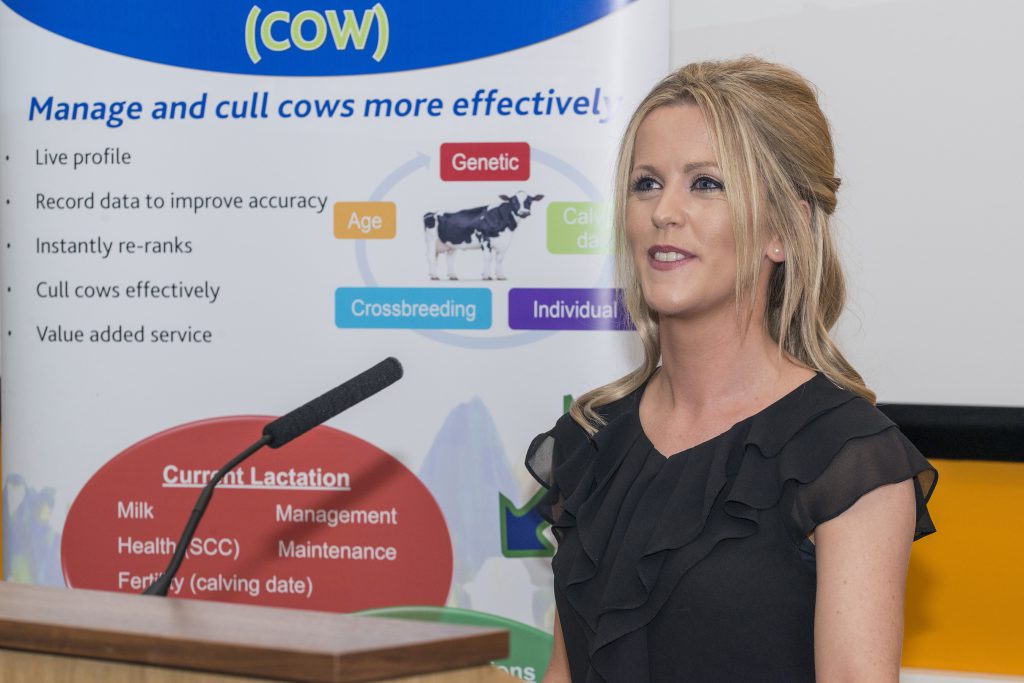 The organisation also received farmer feedback through surveys, which was later used to design and implement the new ‘decision support tool’ – available online as of yesterday (October 31).

C.O.W. loads all current and past information on farmers’ cows, giving predictions on future performance in the herd. Cows that are under-performing will be ranked at the bottom of the list and may be considered for culling.

At present, cows eligible to be judged by the C.O.W. system must meet certain criteria.

Unlike the Economic Breeding Index (EBI), which focuses on breeding and examines both male and female cattle, C.O.W. is designed to help decision-making in culling and is female-only.

Commenting on the tool, one of the speakers at the launch, Dr. Doreen Corridan noted: “Our strength in the Irish system is collaboration.” She highlighted the cooperation of research, industry and farmers for the good of the industry in the project.

Autumn-calving cows cannot be bench-marked off the current system; however, it is anticipated that there will be further developments in the future to enhance the C.O.W. service, according to its creators. A non-seasonal version was also mentioned, as another possible future development.

Dr. Kelleher summed it up, saying:

It is the first step – with many more steps ahead for further development, should there be a demand.

Prof. Berry – who has been part of the project from the very beginning – outlined three other future developments, which include: the better use of health data; creating a customised or herd-specific version; and including heifers in the ranking – as the current tool is only for cows at present.

One of the participant farmers – Alan Jagoe – noted that, while a farmer would be able to pick out the absolute worst cows in the herd himself, it is the cows close to but not at the very bottom of the chart – that one wouldn’t have guessed – where the tool really comes to the fore.

Interested farmers can find out more on the new tool at the ICBF’s C.O.W. info page.