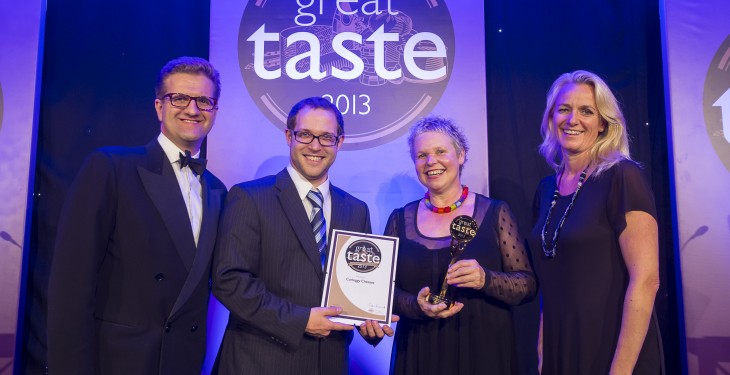 Producers who travelled from Ireland to attend the Great Taste Golden Fork dinner in London this week had plenty to celebrate as Stonewell Cider of Cork and Corleggy Condiments of Cavan were amongst the major Golden Fork prize winners.

The awards, which position Stonewell Cider and Corleggy Condiments among the top food and drink producers in the UK and Ireland, reflect the exceptional skills and dedication of both producers, the organisers said.

Stonewell Cider raised the Golden Fork Award for Best Irish Speciality (sponsored by Bord Bia) for its three-star Medium Dry Cider, which was described by Great Taste judges as “A Cracker” and “A fabulous balance of sweetness, flowery, very interesting apples and with a gentle farmyard authenticity”.  In fact Stonewell Cider was nominated as a finalist with two of its ciders but it was the three-star Medium Dry Cider that judges declared the Best Irish Speciality.

Also celebrating a Great Taste triumph was Corleggy Condiments for its three-star Port Jelly. Corleggy was awarded a Golden Fork for Small Artisan Producer of the Year.  Judges were impressed by Corleggy’s Port Jelly and Xanthe Clay, author and food journalist at The Telegraph commented: “This jelly has a lovely wobble; it has wonderful Port flavours and a dominant presence, a very pure condiment.”

The Small Artisan Producer of the Year Award, given for the first time this year, offers the opportunity for Corleggy Condiments to be mentored and receive valuable support from The Guild of Fine Food as part of its award.

To win the Golden Fork awards Stonewell Cider and Corleggy Condiments Port Jelly had to be tasted again and again by panels of food experts including top buyers from Harrods and Fortnum & Mason, alongside leading chefs, and food and restaurant critics who blind tasted each of the 9,738 entries into the Great Taste award scheme.

Great Taste is all about taste. It is not about packaging or smart design.  Judges are simply presented with food or drink to taste and they provide valuable feedback to thousands of producers each year.

According to the organisers, for a producer to win a Great Taste one-star award is a great achievement, to win two-stars means that many judges have been bowled over by the product, and to win a three-star Great Taste award is comparable to a chef winning a Michelin star.

Some 15 Irish companies were awarded three-star gold awards last August. In addition, more than 50 plus Irish food firms across the island were awarded two and one gold stars.

Speaking in August, the Minister for Agriculture, Food and the Marine, Simon Coveney TD congratulated the Irish food companies in receipt of the Great Taste Awards 2013.

“They have done themselves proud. The range of foods, ingredients and beverages celebrated in these awards is impressive and demonstrates the skill and passion with which Irish food companies and producers continue to enhance our reputation for tasty food at home and on export markets worldwide,” he said.

Since 1994, Great Taste has been organised by The Guild of Fine Food and over the past 19 years more than 80,000 products have been blind tasted by judges including top restaurateurs, chefs, food critics, fine food retailers, buyers and cookery writers.

And for next year, what do Great Taste judges look for?

According to the organisers, they look for great texture and appearance.

“They judge the quality of ingredients and how well the maker has put the food or drink together. But above all, they look for truly great taste. Working in small teams, experts taste 20 foods in each sitting, discussing each product as a coordinating food writer transcribes their comments directly onto the Great Taste website which producers access after judging is completed. Over the years, numerous food businesses, start-ups and well-established producers have been advised how to modify their foods and have subsequently gone on to achieve star status. Any food that a judging team believes is worthy of a star is judged by at least two further teams. Only when there is a consensus will a star be awarded.  For three-star award, judges attending the session, which can be as many as 30 experts must overwhelmingly agree the food delivers that indescribable ‘wow’ factor.”