ICMSA President calls for a dairy safety net of 28c/L 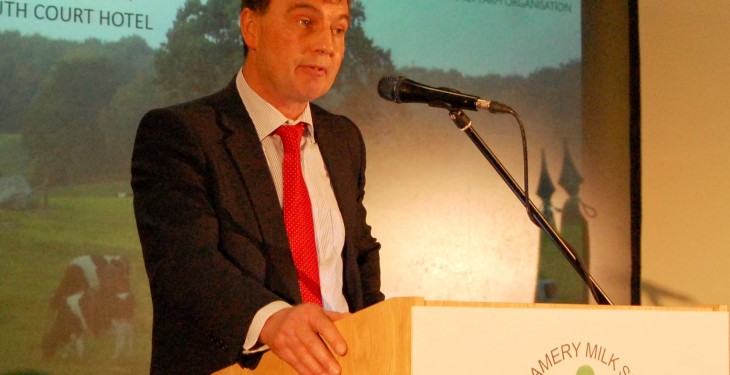 “I want to see a farm safety net of 28c/L put in place. Commissioner Hogan must also act to address the power of multiple retailers. Primary producers must see tangible actions taken on this matter during 2016.

“For everyone’s sake, farmers and consumers alike, control of indigenous food production has got to be taken back from the greedy clutches of retail corporations.”

Comer said that dairy farmers had seen their milk prices collapse over the last 12 months.

“Some people wince when I use this turn of phrase.

“But this is exactly what has happened. ICMSA estimates that the loss to Irish dairy farmers in 2015, relative to 2014, is €590m. And this transfers to a drop of almost twice this figure, where the rural economy as a whole is concerned.

As the picture now looks, the losses will be greater again in 2016.”

Irish dairy farmers are looking towards the next 12 months with absolute foreboding, according to Comer.

“Global dairy markets have weakened over recent weeks,” he said.

“We need our policy makers to realise this and act accordingly.  If they continue to deploy the same manifestly inadequate measures then we can assume that they are happy to contemplate Irish dairy farmers producing milk below the cost of production in 2016.”

Comer called on the Minister of Agriculture, Simon Coveney, to pay out the EU dairy aid package before Christmas.

“I am extremely disappointed that no announcement regarding the €13.7m support measure has been made,” he said.

“And ICMSA’s position on this matter is clear: the EU funding package must be fully matched by the national exchequer, as acknowledged by An Taoiseach at this year’s National Ploughing Championships.”