Ireland has dropped to eight on the EU deadweight heifer price league table, the latest figures from the Livestock and Meat Commission (LMC) show.

This latest price for R3 heifers in the Republic is 0.7c/kg above the EU average price and 57.5c/kg lower than the equivalent price in Northern Ireland.

In the week ending November 15, the average R3 heifer price in Northern Ireland was the equivalent of 453.3c/kg.

Northern Ireland has reclaimed the second top spot on the EU league table.

Looking to Britain, for the week ending November 15 the average R3 heifer price was the equivalent of
493.6c/kg. 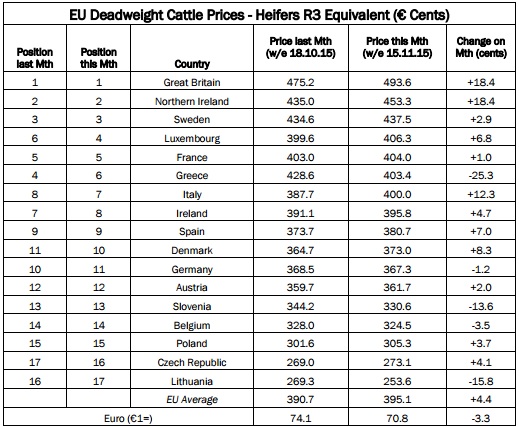 Plain store cattle, especially Friesian steers, have taken a price hit in recent weeks with these lots back by €50-60/head.

According to mart managers, plainer cattle are becoming more frequent in the ring and this is having a negative impact on the trade.

Despite the fall in demand for plainer lots on the back of increased throughput, there are plenty of buyers for the quality lots on offer, report mart managers across the country.

Store steers, last week, generally made €1.33-3.13/kg while the heavier forward beef classes traded from €1.40-2.74/kg despite the uncertainty in the beef market.

There was also a good trade reported for the better quality heifers, but the poorer quality lots remained difficult to sell.