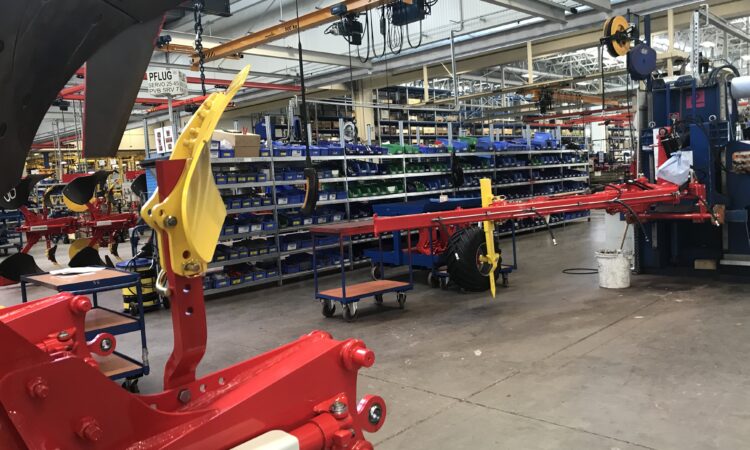 The plough is one of the most famous implements in farming and has fascinated many when working in the field.

The manufacture of a plough is just as fascinating. AgriLand watched the process from start to finish at Pottinger’s factory in Vodnany in the Czech Republic recently.

Pottinger ventured into the production of tillage equipment in 1975 – when the company purchased Landsberg – and says that it prides itself on producing high-quality machinery.

We began the journey in the factory’s storage hall, where sheets of metal and lengths of box iron – which are sourced in Germany – awaited their turn to be transformed into the latest machine to leave the Pottinger line. 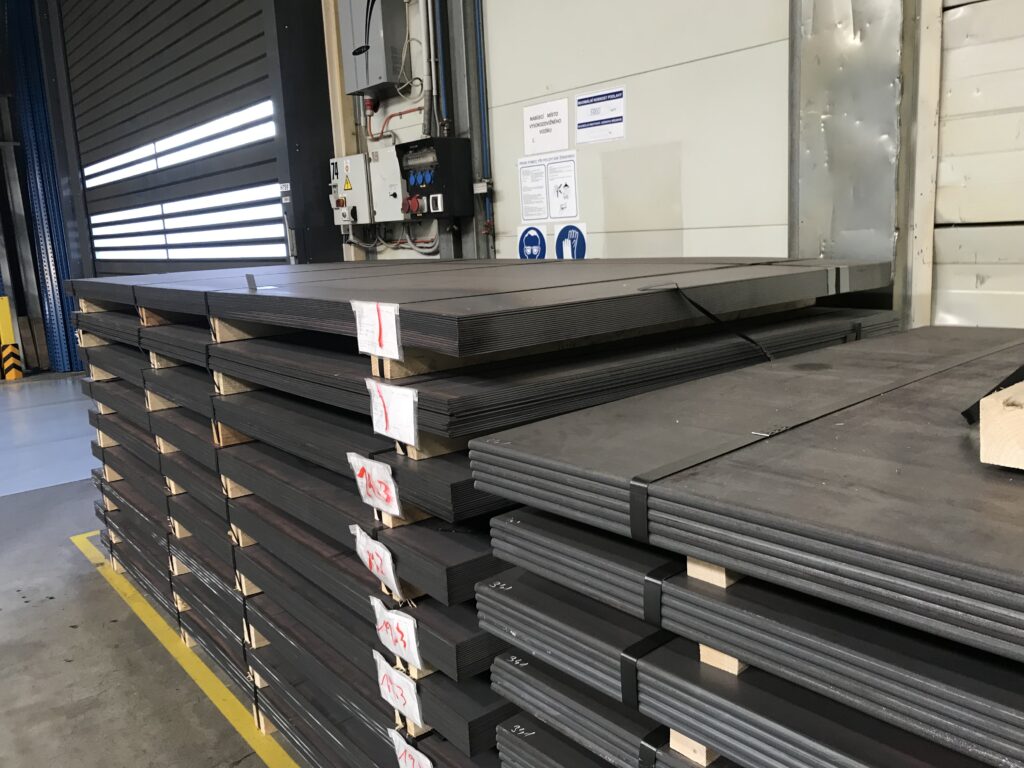 From there, a laser cutter began the process by cutting out the basic shapes of the plough parts. The on-site laser cutter can cut up to a depth of 20mm; any depths over this size are outsourced.

Still in the form of flat pieces, these parts (below) made their way to the furnace. 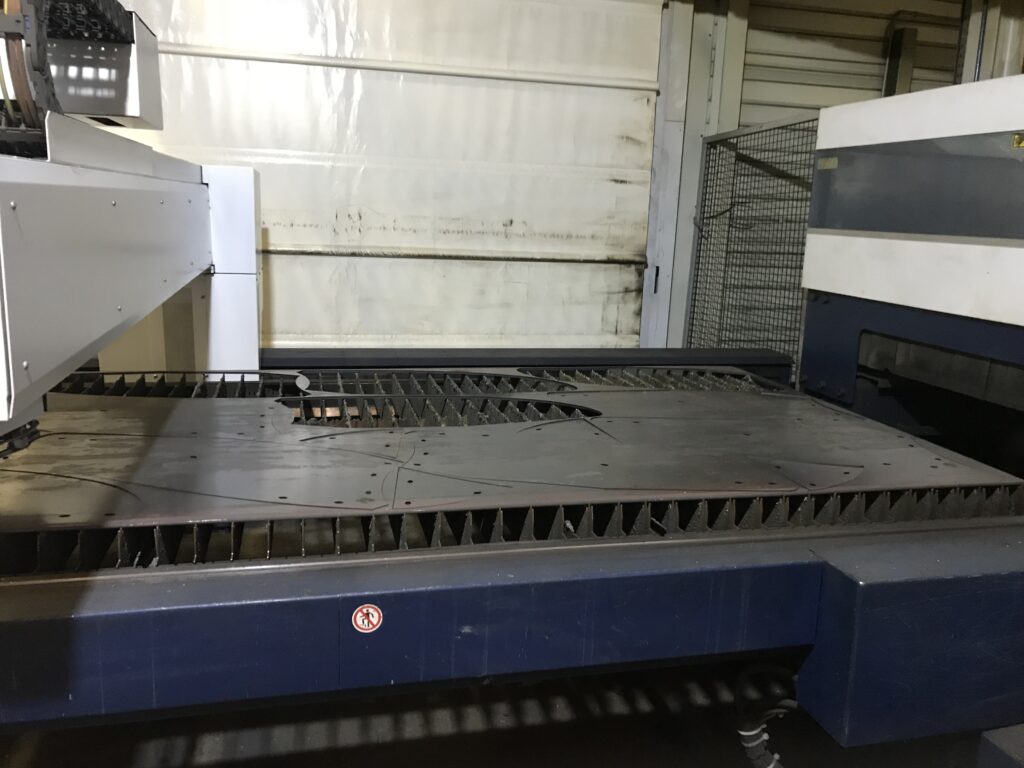 Pottinger has invested approximately €1.8 million in its carburizing system, in which mouldboards are heated in a furnace at over 960°C and, thus, the amount of carbon in the steel is increased to change its properties.

On leaving the furnace the boards are darker in colour; carbon dust can be seen on the surface. Once carburizing is complete, the boards move on to the next furnace.

The boards then travel through another furnace for 35 minutes at a temperature of 920°C and, on leaving the furnace, were pressed into shape – as can be seen below.

From the time the boards leave the furnace to when they leave the press, less than five minutes have passed.

Other parts are also pressed on-site. AgriLand saw these shares (below) being produced; you can even see one that’s hot off the press. All parts are prepared, primed and powder-coated (painted) before being assembled. 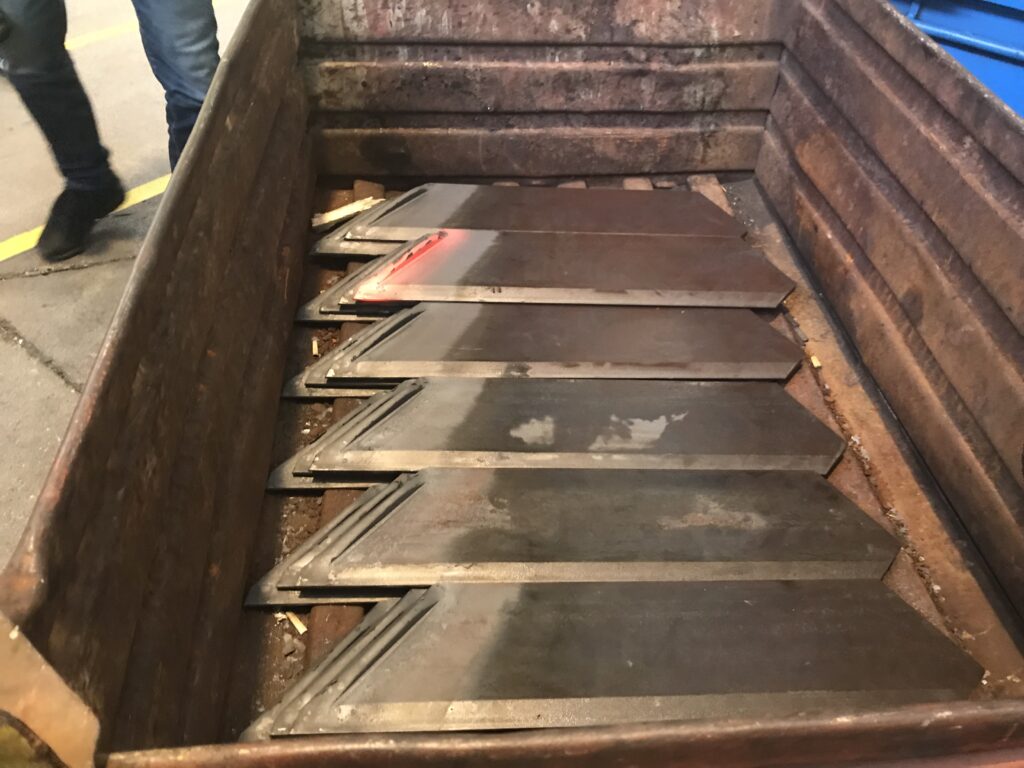 Plough boards are tested for characteristics such as hardness and shape; the steel is checked under a microscope.

Assembly is a fast process. It takes about 1.5 hours. On average, four to five ploughs are produced each day in this factory – equating to nearly 35 per week.

Plough parts and components are collected in specific areas of the production line. The main beam is the first part to be worked on; it’s initially kitted out with hydraulic pipes/hoses. 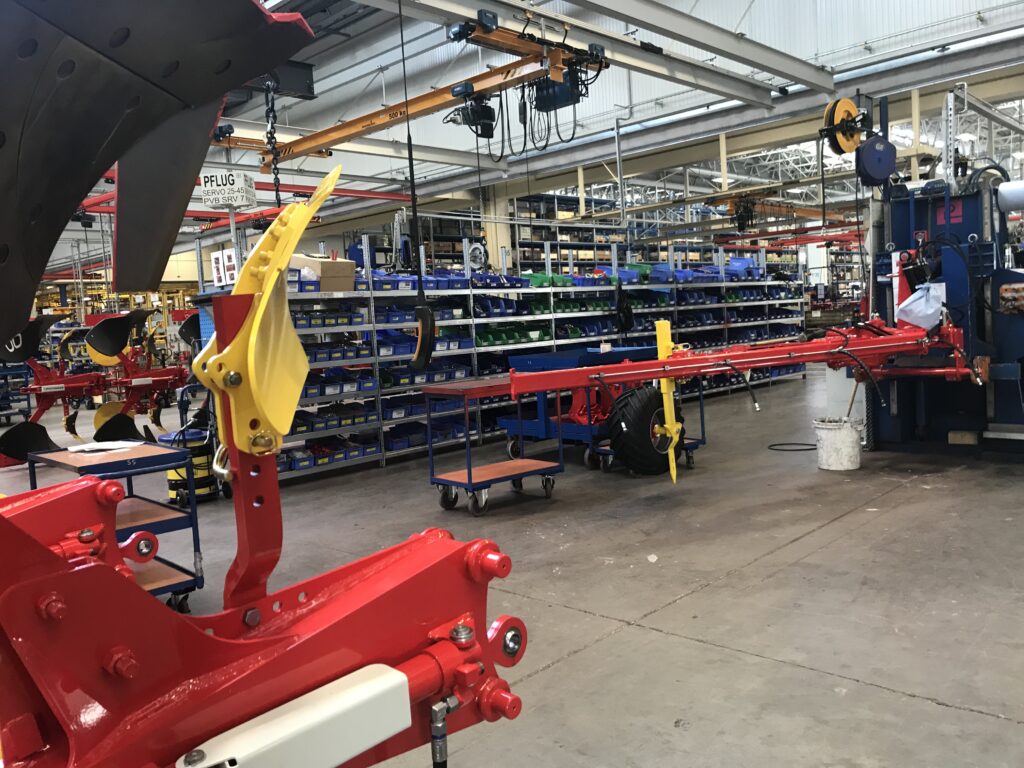 Depth and transport wheels are attached before the boards are fitted. The ‘bolt-on’ approach to construction apparently helps to reduce stress, load and vibration. 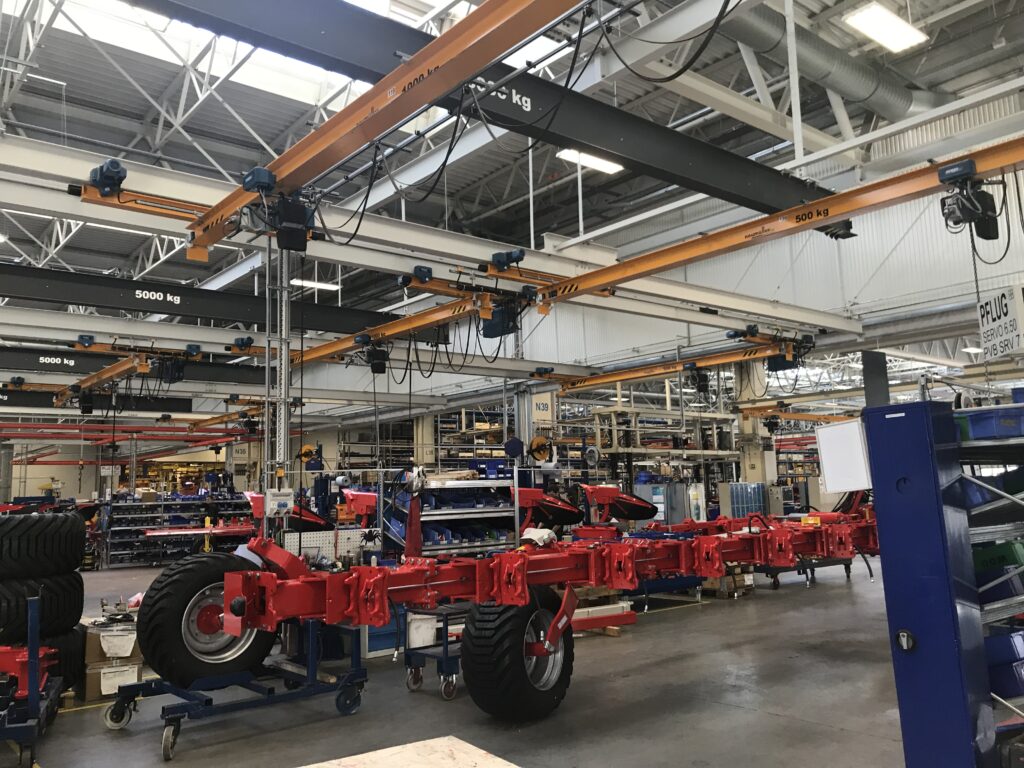 Plough legs and bodies are assembled, before being attached to the beam (as can be seen below). 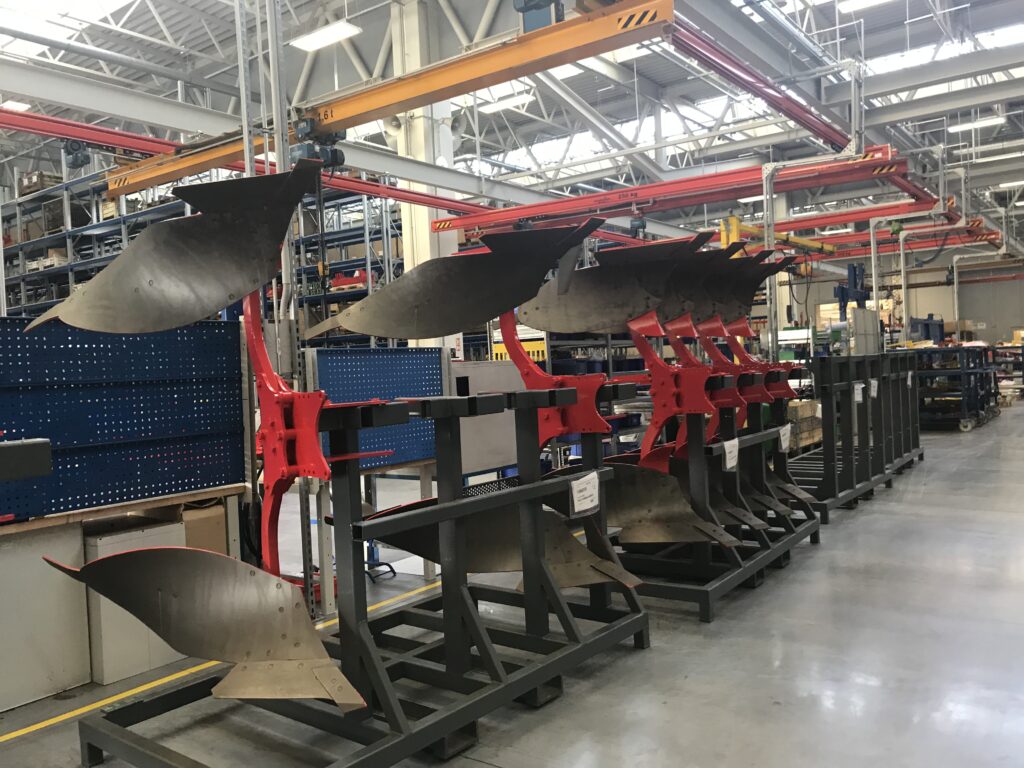 The headstock and legs/bodies are then fitted. This is a decidedly ‘manual’ process. 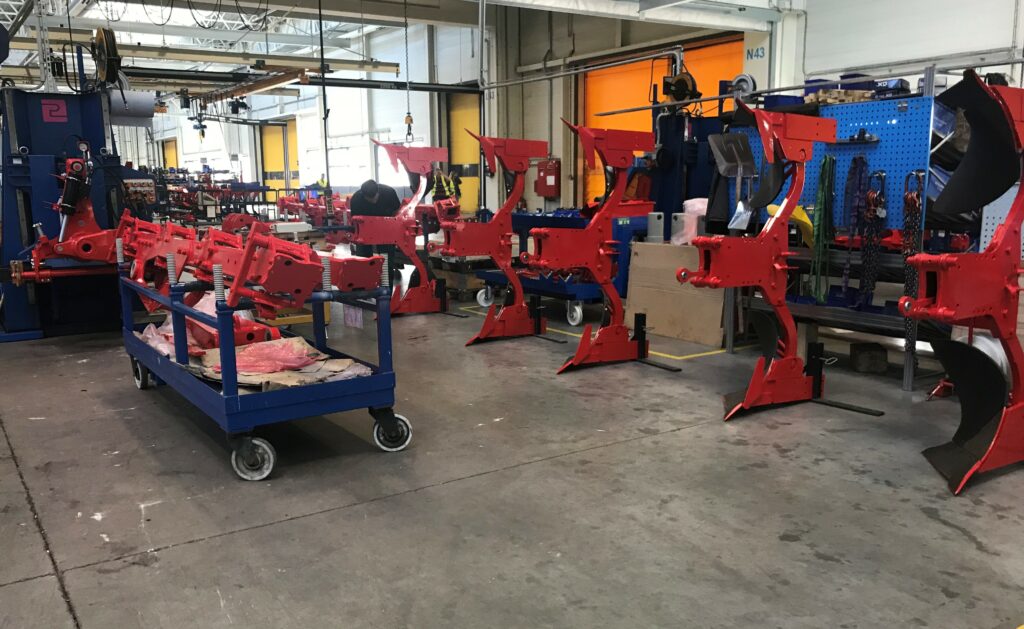 There were lines of finished ploughs outside the assembly hall at the premises. In fact, there were ploughs of many different sizes and configurations – from two to nine furrows. It’s worth noting that there are over 600 versions of Pottinger’s Servo plough available. 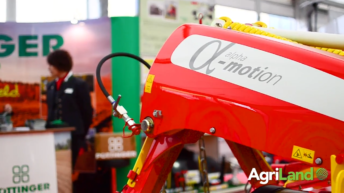