Yesterday, April 26, at a breeding event held by MSD Animal Health in Moorepark, Dr. Stuart Childs – a dairy specialist with Teagasc – confirmed Teagasc plans to increase the use of beef sires on its dairy farms.

Along with highlighting Teagasc’s key messages to dairy farmers for the 2019 breeding season.

Explaining the reasoning behind Teagasc’s new change is direction, he said: “The background of it all is Origin Green. We are exporting a huge proportion of the milk that is being produced and they are selling it on the basis of their sustainable development goals.”

Also, touching on the issues surrounding the bobby calf trade, he said: “The number of bobby calves going to Ashbourne Meats and a facility in Co. Mayo in the last numbers of years has started to increase.

Bord Bia in particular are really beginning to ask questions of us in terms of our attitude to this and what we are going to do about it.

“Is it responsible production generating all these surplus male calves as a result of trying to get heifers that are not necessarily needed? And, is the whole thing sustainable?.”

In addition to increasing the use of beef AI, Stuart also explained the other key messages – from Teagasc to dairy farmers – for the 2019 breeding season.

Continuing, he said: “The angle that we are taking this year is that people should continue to use high-EBI genetics; every €1 increase in EBI is worth €2/cow/year.

“However, if you look at the bottom 5% with an average EBI of €27, if they could get their EBI up to the average, it would be worth almost €30,000 to them,”  highlighted Stuart.

“In the discussions groups that we are dealing with where farmers are hitting 80-90% 6-week calving rates; they are getting far more heifers than they need.

Their are herds that have the ability and reputation to sell heifers, but then their are a lot of herds which I like to call ‘accidental tourists’ to the heifer sales game.

“High-fertility herds can reduce the number of straws that they need to use in order to generate the heifers. Take the 100-cow herd, they probably only need to use 100-125 dairy straws if they want 20-25 replacement heifers. 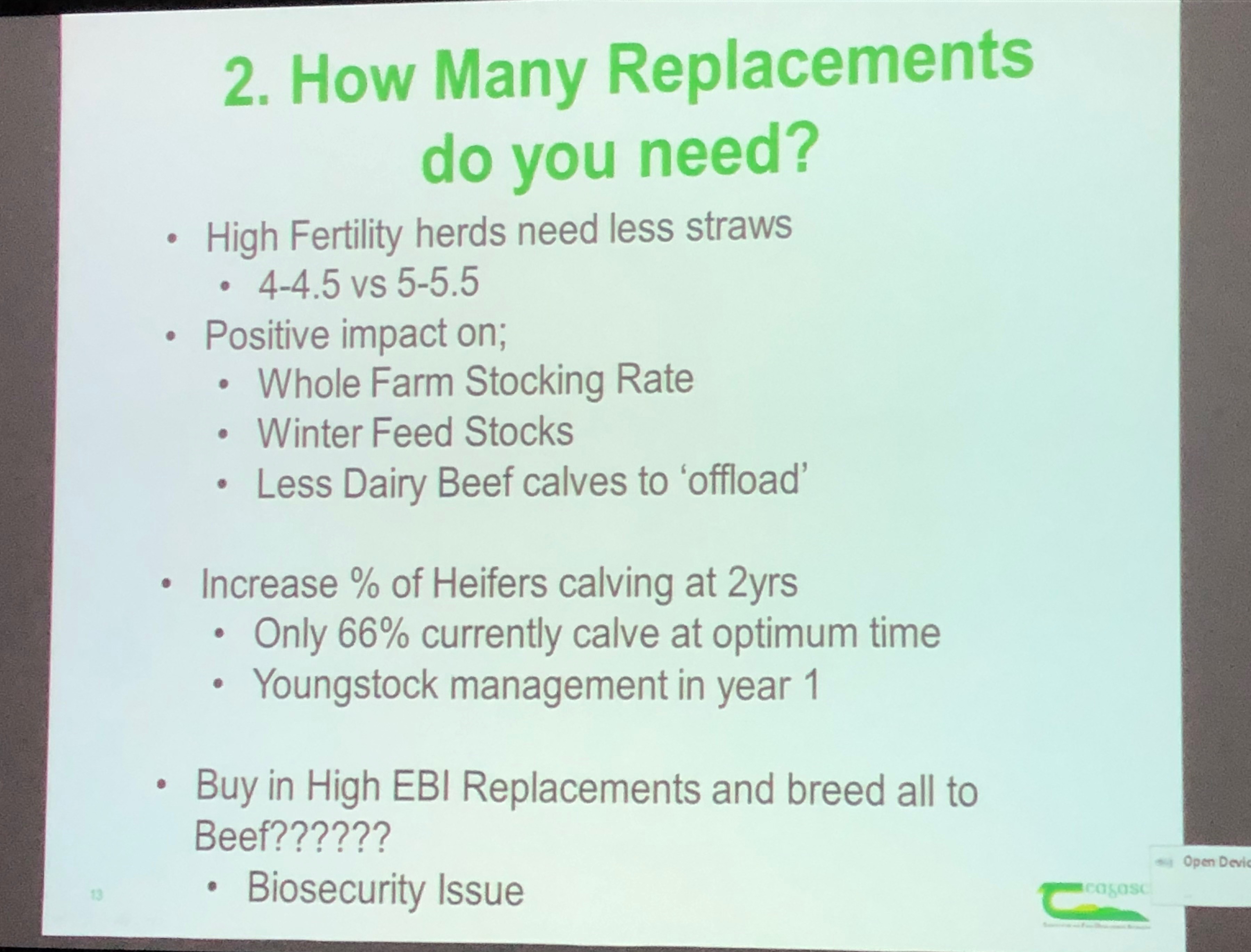 “Keeping surplus heifers is putting a lot of pressure on the system and you could say that we are guilty within Teagasc of pushing people to push their stocking rate on. This means there are more cows on the farm and then we have more surplus heifers on the farm.

“We are then putting pressure on our silage reserves or going out buying silage to support a system that isn’t that profitable,” he added.

I suppose young stock management in year one will be critical to making sure we will be able to bull them at the right stage and calve them at two years old.

“I think something to be willing to look at – particularly for herds with a poor EBI – is bulling all cows with beef AI and buying in high-EBI heifers; but, obviously there are biosecurity measures that need to be taken into consideration,” expressed Stuart.

“We would be targeting that you use all the dairy straws within the first four weeks and the risk is then that people are going to throw in the bull.

We all know that bulls are a risk in terms of fertility. If they get stressed, are put under pressure or are exposed to disease they can fail.

“So, we want to encourage people to continue to use beef AI; to try and increase the beef merit of the calf, while having a known value around the calving difficulty in order to reduce the lull around calving and to reduce the number of bulls that are going to be on the farm from a health and safety point of view.

“We have been strongly advocating that people look at their milk recording reports from last year and see the bottom 10% of cows. Even if they come into the crush on day one of mating of the breeding season, they get a beef straw. 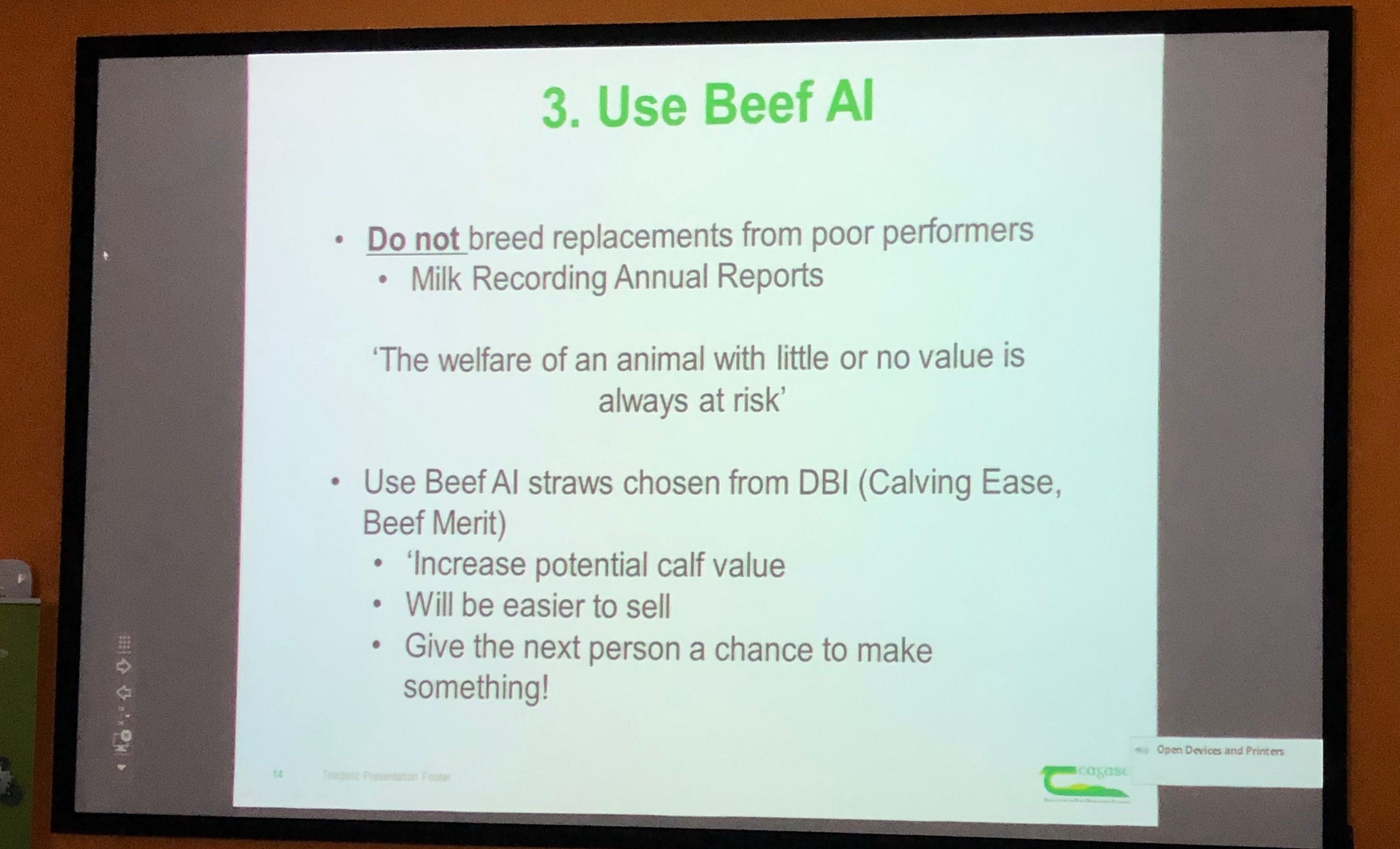 “There has been a fall in vet call outs to calves this year because people were just letting them drop off because the value just wasn’t there..

Using beef AI will hopefully increase the potential calf value, making them easier to sell and give the next person a chance to make something.

“There is a certain cohort of farmers that are of the opinion that beef farmers should get out of their way to let them drive on and that is a bad attitude for people to have.

“So, we should try to provide them with a good animal that is going to have good value,” concluded Stuart.

Dairy-origin bulls average 1.70kg/day and achieve an average kill out of 52%