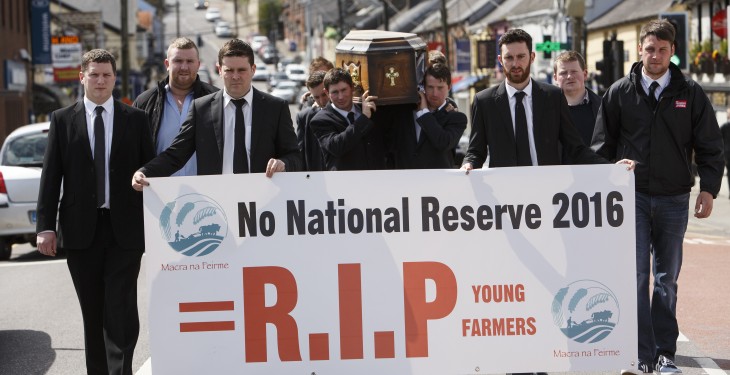 Macra na Feirme National President Seán Finan has again warned that the lack of any National Reserve in 2016 could be the death knell for many young farmers.

“We are still actively campaigning hard on a 2016 National Reserve and believe it will be a retrograde step if there proves to be none,” Finan said.

“We are demanding consistency in the application of young farmer policy. There should be a more consistent income stream for farmers entering the industry as it’s so important new blood is brought into it.”

Last November, the Minister for Agriculture Simon Coveney confirmed there is no designated funding from the Basic Payment Scheme to fund a National Reserve in 2016.

Last month it became clear that the prospect of a 2016 National Reserve was becoming more unlikely with no agreement having taken place between the Department of Agriculture and farm organisations over funding of the measure.

Finan said that the decision as to whether there will be any National Reserve in 2016 is down to the Minister for Agriculture.

He added that if there does prove to be no 2016 National Reserve it means many young farmers won’t be able to access some CAP schemes.

“The National Reserve is a once -off fund. Due to demand in 2015 we were catering for farmers that entered the industry right back to 2010, which had low or no entitlements. That meant there was a huge uptake in 2015.

“The National Reserve budget has nearly all been used up, which has created the difficulties we now find ourselves in for 2016,” Finan said.

He added that Macra have long highlighted to the Minister and the Department that the replenishment of the Reserve is a major issue for young farmers.

Whereas the Young Farmers’ Scheme is a set amount of money every year that is set aside for the duration of CAP, the National Reserve is a once-off allocation.

“It’s definitely not ideal that there isn’t a better method to replenish the Reserve to provide for young farmers entering the industry from this year until 2020.”

Not The Time To Shut Out A Future In Farming

On May 3 Finan lead a delegation of young farmers to present a letter to the Minister for Agriculture outside the Minister’s office in Dublin.

The farmers staged a demonstration highlighting the importance of a young farmer National Reserve scheme for 2016.

“Young farmers need a National Reserve to give them a fair start in farming. They are now left in limbo as the closing date for Basic Payment Scheme fast approaches. It further impacts on young farmers without entitlements as they are not in a position to get the 25% young farmer top-up,” Finan said.

Young farmers have invested in their futures by attending agricultural colleges and completing their agricultural courses in unprecedented numbers, now is not the time to shut them out of the National Reserve and a future in farming.”

Macra’s Agricultural Affairs chairman Bryan Hynes said that over a year ago the Minister and the Department were informed that there was no sufficient way of replenishing the National Reserve outside of a linear cut.

“We could be facing into another group of forgotten farmers if we don’t get the reserve we need,” Hynes said.