Harvest is well underway in parts of the world and, at present, crop yields are looking promising. The EU Commission released its latest short-term outlook report for EU agricultural markets on July 3.

Cereal production in 2019/2020 has been forecast to increase from last year and reach 311 million tonnes – as long as good weather prevails. Wheat production is expected to rise by 11%.

The winter barley harvest has started in the UK, but it is too soon to say what yields are like. Harvest has also started in France and while drought hit crops in June the effect is not expected to impact hugely on yields.

Some reports are suggesting that the German winter wheat crop could bounce back and increase by approximately 23% this harvest following last year’s drought.

Time will give a better indication of yields across Europe but, at present, the outlook looks like there will be little in the way of dramatic changes to yield or in turn price.

The trading year came to an end on June 30 and Ukraine topped the exporters list. It sold almost 49.7 million tonnes of grain around the world.

With little fresh news in the market, prices didn’t alter much in the past week. However, the Free-On-Board (FOB) Creil price did suffer. It dropped by €5.00/t from Monday, July 1, to Thursday, July 4, most likely due to an expected healthy supply of malting barley in Europe. 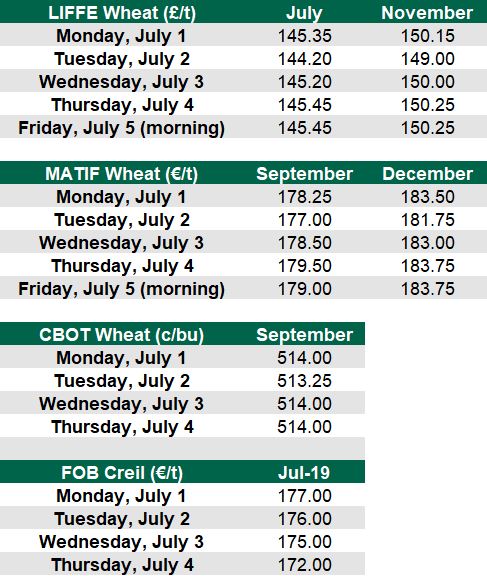 When to get cracking when making wholecrop silage