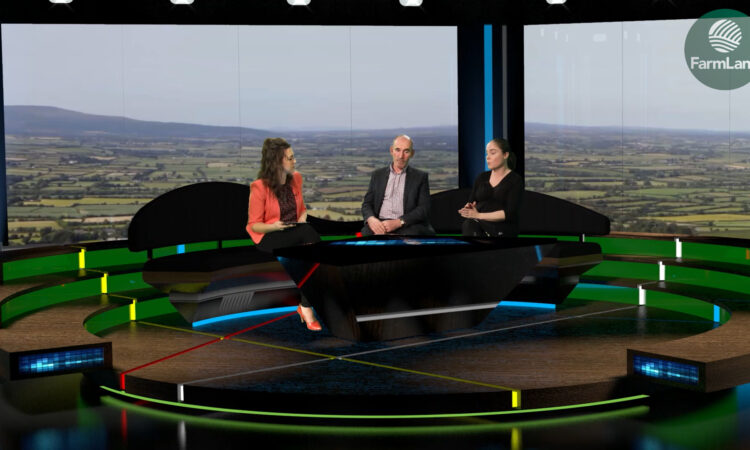 This week’s episode of FarmLand features an in-depth analysis of Ireland’s ambition to eradicate Bovine TB from the national herd by 2030 and a detailed look at fodder reserves across the country as winter housing season looms large.

Tonight’s show (Thursday, October 18) – airing at 8:00pm – also includes a special report on the achievements of the award-winning Burren Programme in Co. Clare.

Plus, our reporter Sylvester Phelan journeys to the Banner County this week to meet up with farmers ahead of next week’s much-anticipated Winterage Festival; hundreds of farmers will herd their cattle from the lowlands of the Burren up to the highlands of the limestone landscape where they will graze for the winter months.

For the discussion on Bovine TB, presenter Claire Mc Cormack is joined in studio by Dr. Eoin Ryan, senior superintending veterinary inspector at the Department of Agriculture, Food and the Marine and Frank Brady, Irish Farmers’ Association (IFA) county chairman for Monaghan.

Commenting on the Government target to eradicate Bovine TB by 2030, Dr. Ryan said: “It is a realistic but ambitious target. It’s not going to be easy to achieve it; but I think we have no choice. We have to do more than we have been doing at the moment.

I’m acutely conscious of the burden TB causes on farmers – not just the financial but the mental stress and worry and uncertainty – and we really have to do more to remove that stress on farmers.

Although levels are lower than they have ever been historically, the leading vet acknowledges that greater strides are needed.

“We’ve had a great autumn so we can set up the farm to stay out grazing as long as we can…farmers should be looking at having about half the farm closed by November 1,” said Dukelow.

Our reporter Siobhan Walsh also visits one farmer in Co. Wicklow to assess the situation on the ground.

Meanwhile, Dr. Brendan Dunford, manager of the Burren Programme, will talk about progress in the unique region – as well as the upcoming Burren Winterage Weekend.