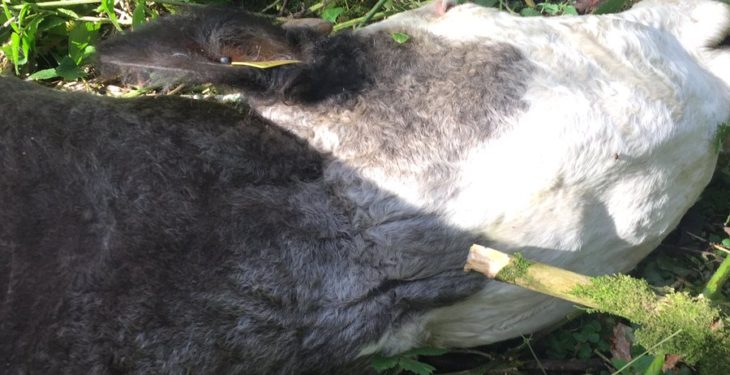 A farmer and his family in Co. Meath were shocked to find one of their cows deliberately strangled to death this morning (October 2).

The animal was found purposefully tied to a tree, with a new rope around her neck, according to Paul Kennedy – a part-time farmer, who farms alongside his father Michael in Co. Meath.

“She was a very docile, quiet animal and had a six-month-old calf suckling her. She was in a batch of about 10 other cows with their calves in a field near Stamullen. The cows would be checked every day and one of the family would have seen them yesterday (October 1) around lunchtime.

“When my father went to check them this morning he heard a calf bawling. When he went searching the field he found the cow tied up.

It’s different when you find an animal with her four legs up in the air, having died of natural causes – you will have that from time-to-time. This was just a random act; it’s a barbaric rural crime really.

Kennedy dismissed any suggestion that the cow may have gotten accidentally entangled in the rope. It was clear to see that the rope was tied deliberately, he added.

The field the 14-year-old Simmental cow was being held in is situated in a secluded area on quite rugged terrain, with no boundaries leading directly to a public road. She was found in a wooded area of the field where the cows would commonly graze, according to the farmer.

Killed for her meat?

The motives of the perpetrator(s) are unclear, as the family gets on well with everyone in the area, Kennedy said.

It is thought that the person or people responsible would have crossed another field to gain access to where the cow was located.

There are fears that the cow may have been strangled with the intention of butchering her in the field at a later date. A similar incident involving sheep occurred in recent years, a few miles from where the field is located, Kennedy said.

We don’t know whether the field was being watched or whether it was opportunistic, given the fact that the cow was so quiet.

Members of An Garda Siochana in Laytown Garda Station have been notified of the incident. Anyone with information is urged to contact the station on: 041-9813320.

Pics: Thieves rob trailer with dead ewe inside under the cover of darkness