A farmer had a lucky escape recently after the hydraulics failed in his tractor while he was agitating slurry and the tractor slipped into the slurry pit.

The incident happened in Hessay, Yorkshire in the UK yesterday and the man was uninjured.

Chains and farm machinery was used to secure the tractor and pull it towards the edge of the pit while fire crews then used pitched ladders out to the tractor allowing the driver to crawl to safety, according to Minster FM.

Pete Gregory, York Fire Station Manager, told Minster FM, that they arrived to the scene which was a very large slurry pit to the rear of the farm and within that actual slurry pit was a tractor which was actually at the time stirring the slurry pit.

“In the course of doing that [stirring the slurry] he was reversing the vehicle to the side of the slurry pit and just as he was about to lower the impeller into the slurry pit to stir it, his hydraulics failed.

“Hence, the tractor started to roll backwards into the slurry pit to quite a significant depth. So, it was up to the lower part of the cab with the slurry entering in.

“We used teams from as far afield as Ripon, who are a specialist team, and a water rescue team; they’ve got special equipment for mud rescues and slurry pits.”

Tractor from earlier incident at the #Hessay Slurry pit. pic.twitter.com/vbtP1riUTm 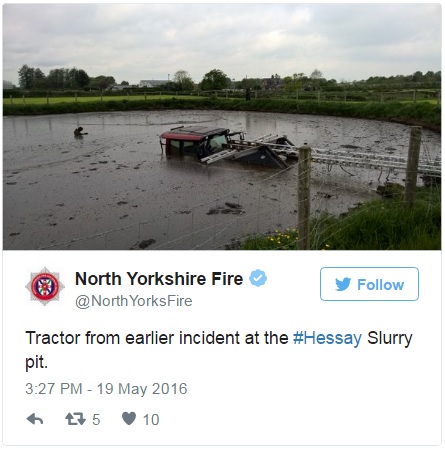