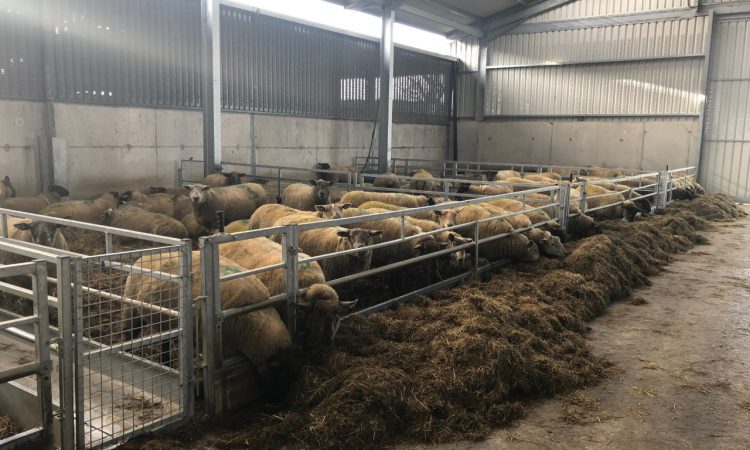 “A ewe needs 66% more energy and 100% extra protein in the last two weeks of pregnancy,” according to Cian Condon of Teagasc.

Condon was speaking at a Teagasc Sheep Seminar last week, in Manorhamilton, Co. Leitrim. The focus of his presentation was on ewe nutrition pre-lambing and the importance of getting it right.

Over the coming weeks, the main concern for sheep farmers will be to maximise the quantity of good-quality fodder they offer their ewes. However, feeding just grass silage alone won’t be enough.

In general, a ewe will only be able to consume 1kg of dry matter (DM) in late pregnancy. This 1kg of silage will only look after the needs of the ewe. Therefore, a high-quality ration will have to be introduced to help the growth of the foetus.

There is no doubt about it; if you can feed ewes top-quality silage that is over 75% dry matter digestibility (DMD), then you can cut back on the amount of concentrates offered.

This table (below) outlines the amount of concentrates a ewe should be offered based on the number of lambs she is carrying and how many weeks she is away from lambing. The data assumes that the ewe is being fed silage of at least 70% DMD and has a body condition score of 3.0.

When farmers are feeding concentrates they need to take into consideration the ingredients. In the last few weeks of pregnancy, it’s all about quality, not quantity.

Therefore, in the last six-to-eight weeks of pregnancy, ewes require a ration of at least 20% crude protein.

Condon added: “The target protein intake for a twin-bearing ewe should be 200g for every 1kg of feed consumed.

“Staying on the point of protein, ewes require a vast amount of digestible undegradable protein (DUP) in order to help with colostrum production.

“Moreover, the target DUP intake should be 100g per lamb carried, with soya bean being the best source on the market,” Condon concluded.

The dangers that come with feeding concentrates to ewes pre-lambing is digestive upsets. It is important to gradually introduce meal to the diet to prevent animal health problems such as acidosis.

Moreover, it is vital to provide adequate feed space in order to prevent bullying at the feed-face.

Therefore, the maximum number of ewes – that weigh 70kg – to be fed in a standard pen 4.8m-wide pen is 10 (in late pregnancy), according to Teagasc.

This table (below) outlines the trough space requirements for ewes of different weights. 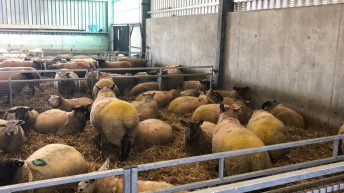 Lameness: What can farmers do about it?