The Minister for Agriculture, Food and the Marine, Michael Creed, announced that the payment of over €13.2 million to approximately 97,000 farmers has commenced today (Monday, July 2).

This money was deducted from their 2016 Basic Payment Scheme (BPS) payments under the Financial Discipline rule, and is now being reimbursed in line with the EU regulations.

Minister Creed said: “I am pleased to confirm that these payments totalling €13.2 million are now being reimbursed to eligible farmers.

The minister added that these payments “will bring the total paid to Irish farmers under the 2017 Basic Payment Scheme to €1.19 billion.”

This news follows the announcement this morning that an agreement has been reached with Qatar’s Ministry of Public Health which will allow for the importation into Qatar of Irish beef, sheepmeat and poultry, according to Minister for Agriculture, Food and the Marine Michael Creed.

Welcoming the news, Minister Creed said: “The opening of this new market is a reflection of the confidence the Qatari authorities have in the rigorous controls and high standards of food safety we have in Ireland.”

The market is being opened to boneless beef, sheepmeat and poultry – for both meat and meat products.

The opening of the Qatari market is the result of ongoing efforts by my department, the Irish Ambassador accredited to Qatar and the agricultural attache in the Gulf Region in recent times.

Minister Creed reiterated his commitment to ensuring that Irish meat exporters would have access to as many global markets as possible in line with the market development themes of Food Wise 2025.

He added that his department, the Department of Foreign Affairs and Trade and Bord Bia would continue to work closely in achieving this goal. 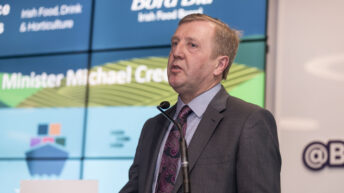