Grazing residuals: What covers should I be going into?

Beef farmers were treated to a host of technical villages at BEEF 2018, which took place in Grange, Co. Meath, on Tuesday last (June 26).

One such village was Grass 10. Farmers had the opportunity to talk and discuss all things grass with local Teagasc advisors and industry experts.

Teagasc forecasts – by improving grass utilisation on a beef farm – there is scope for an additional €105/ha for every extra tonne of grass dry matter (DM) utilised. However, many Irish farms are only producing and utilising 50% of their grass growth potential.

On entering the village, a range of demonstration plots were set up which represented grazing platforms at different stages of growth; some of the plots had been grazed correctly, while others were not.

The aim of the demonstration was to show farmers: what covers to graze; what residual to graze down to; what happens when a cover is poorly grazed; and when farmers should close up paddocks for surplus bales.

All plots had received two rounds of sulpha CAN. Teagasc’s John Large – an advisor in Newcastle West, in Co. Limerick – highlighted that some soils at Grange were sulphur deficient.

The first plot was grazed 19 days before Tuesday. The sward was full of leafy grass, indicating that a good clean out was achieved at the previous grazing.

John added: “There is a very high proportion of leaf present, so animals will do very well on this. Also, a very good clean out will be achieved.” 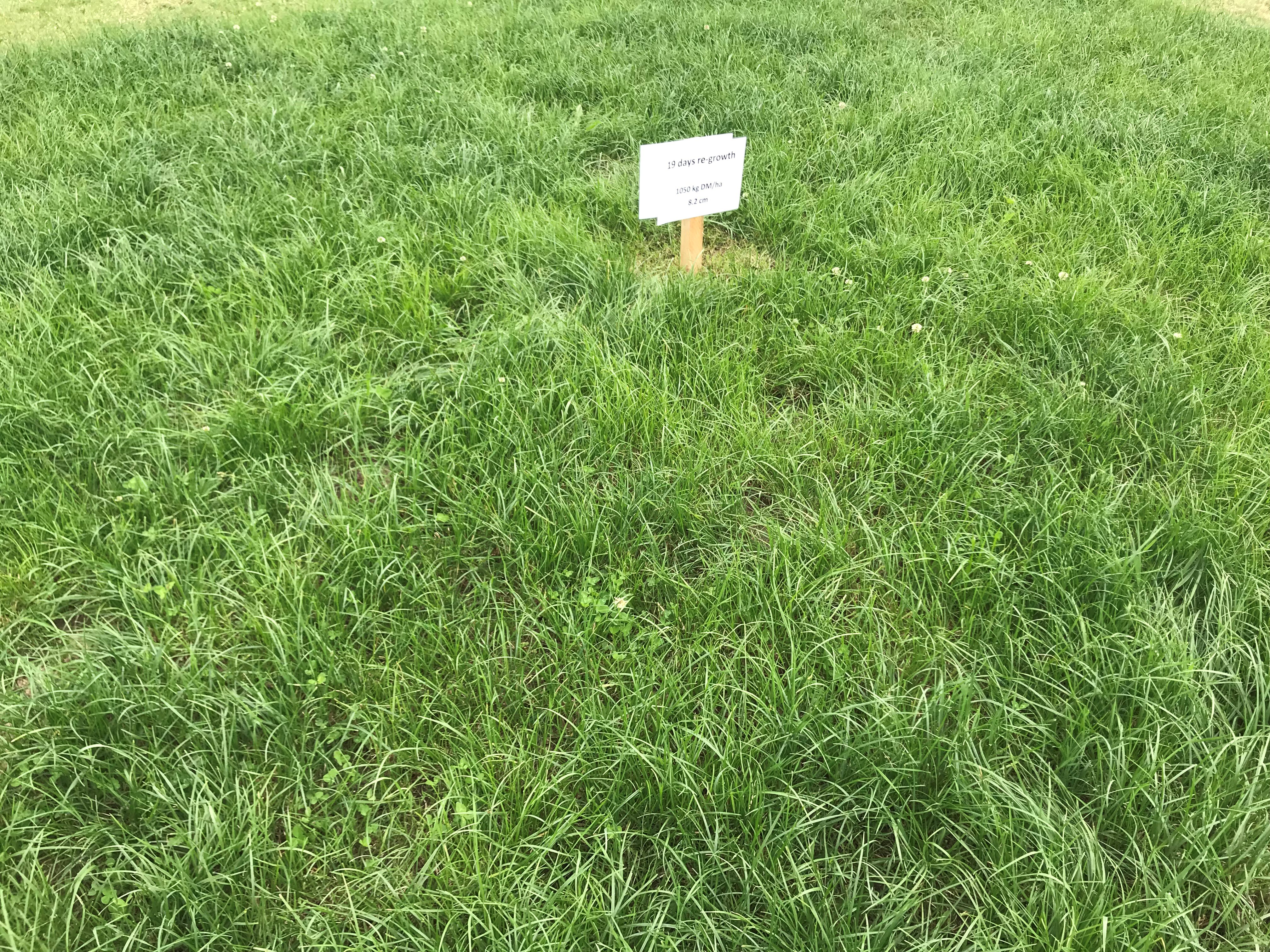 Plot two had been grazed on Monday last. Because there was an ideal pre-grazing cover, a very good clean out was achieved; it was grazed down to 3.5cm.

This will encourage leafy regrowth. In a normal year, excellent quality grass would be available to graze in three week’s time. However, with growth rates at the moment, regrowth will be reduced considerably.

“Because of the drought, farmers need to extend rotation length out to 24-25 days. Growth rates are very low at the minute (30-40kg/ha). Typically – at this time of year – farmers could expect nearly double that (70-80kg/ha),” John explained. 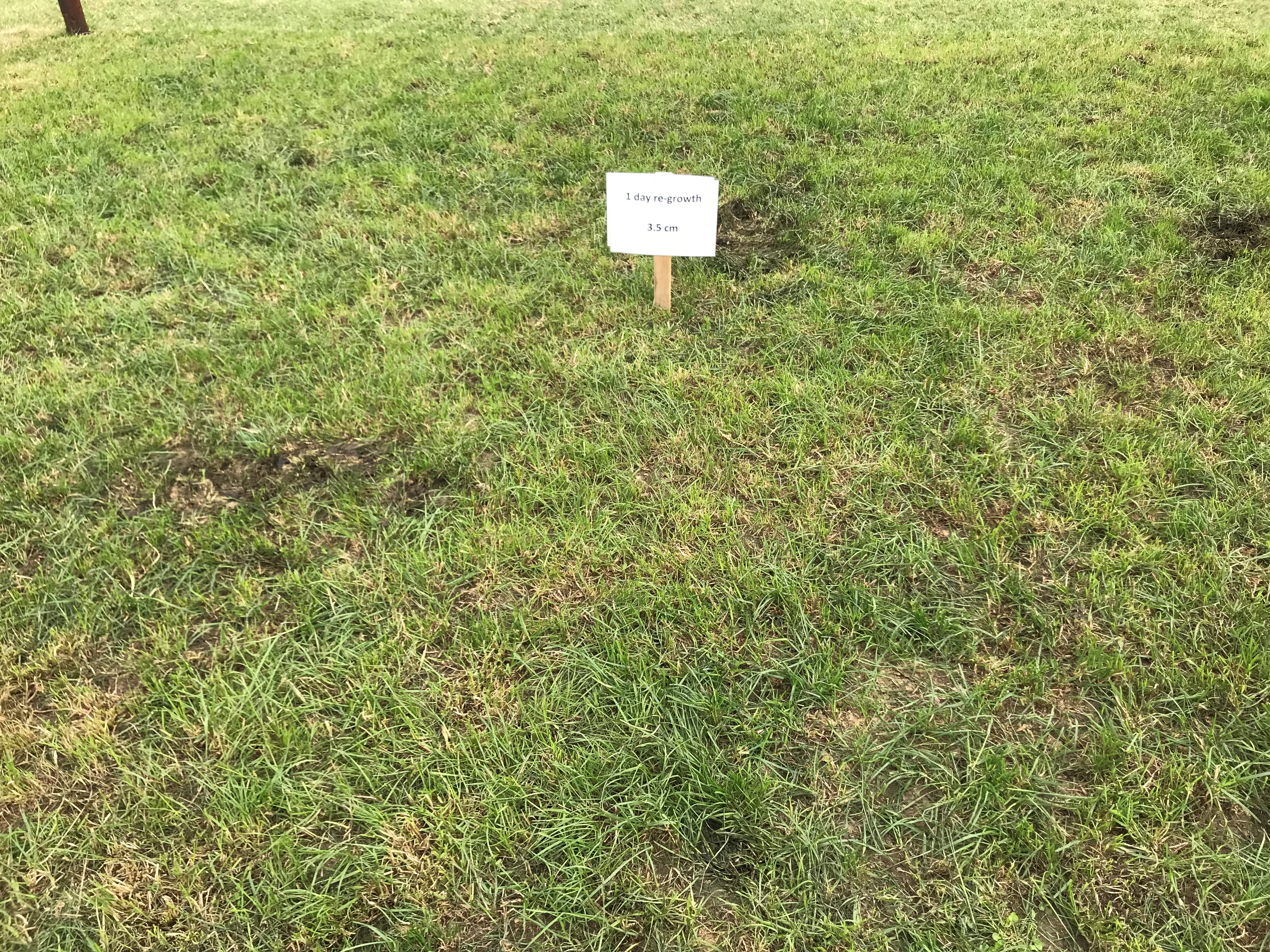 This plot had been striped for four days. Again, a good clean out was achieved and a leafy sward is present. However, grass growth has remained slow due to the hot weather. The plot has a cover of 100kg/ha (dry matter) and a height of 4.4cm. 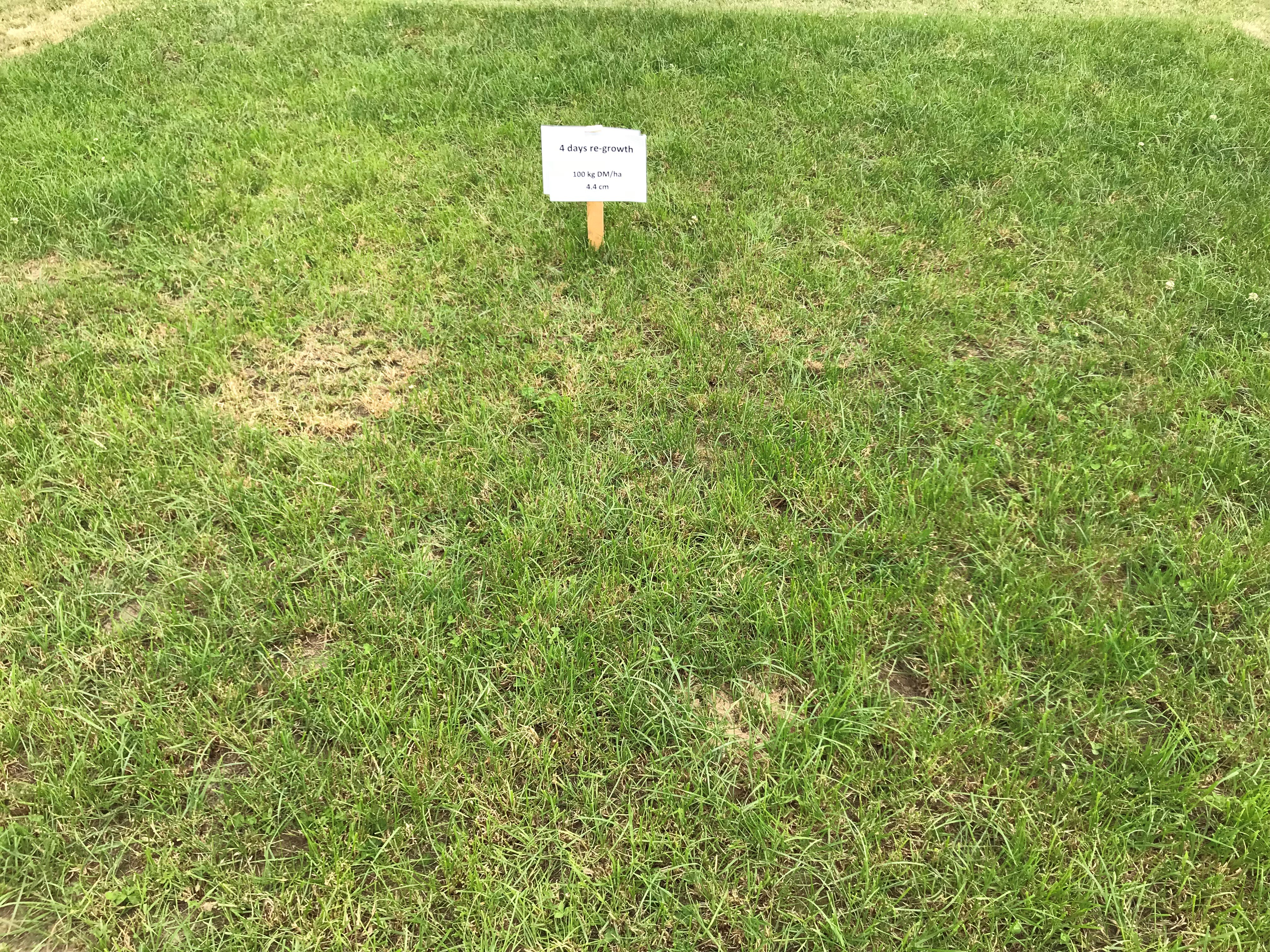 Plot four had seven days of regrowth. On this, John said: “At seven days, the plant starts to produce its first new leaf. At 14 days, it produces its second leaf and at 21 days, its third leaf is out.

“After 21 days, the plant produces a fourth leaf. When this happens, the first leaf dies off. This dead material allows the plant to be become less digestible and more stem is produced to hold up the plant,” he explained.

“The first 14 days of growth are quite low; there will be the same amount of growth from 14-21 days as you will see from the first 14 days; this is when growth really starts to take off,” he added.

It must be noted that due to the weather conditions we are experiencing at the moment, grass growth is much slower. It is advised to extend the rotation length. This plot had a cover of 250kg/ha and a height of 5cm. 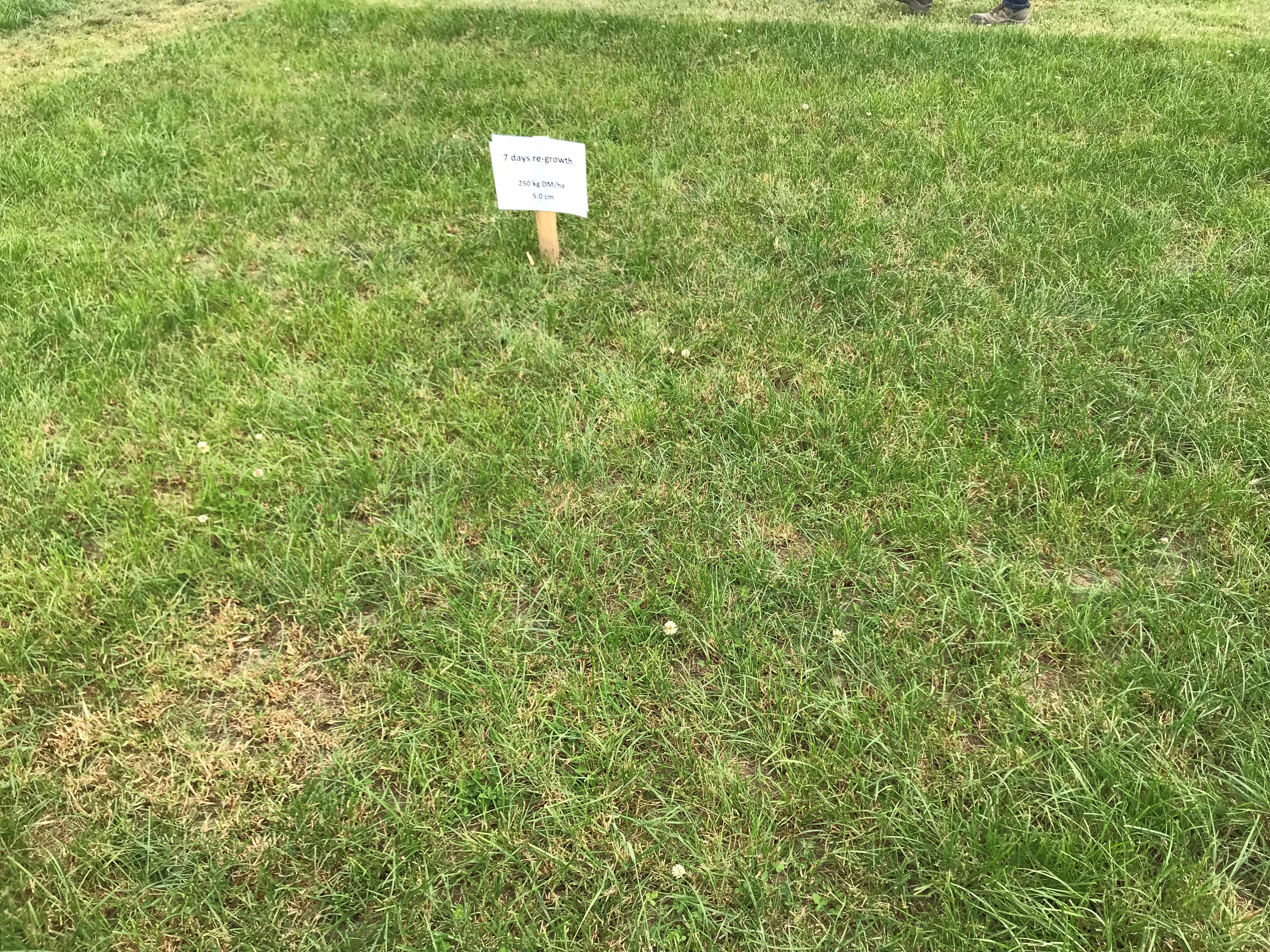 Plot five was grazed two weeks previous and had a cover of 700kg/ha and a height of 6.8cm. The sward contains good-quality grass.

However, John explained that it is at this stage that grass can really take off and farmers must walk their farms on regular occasions. 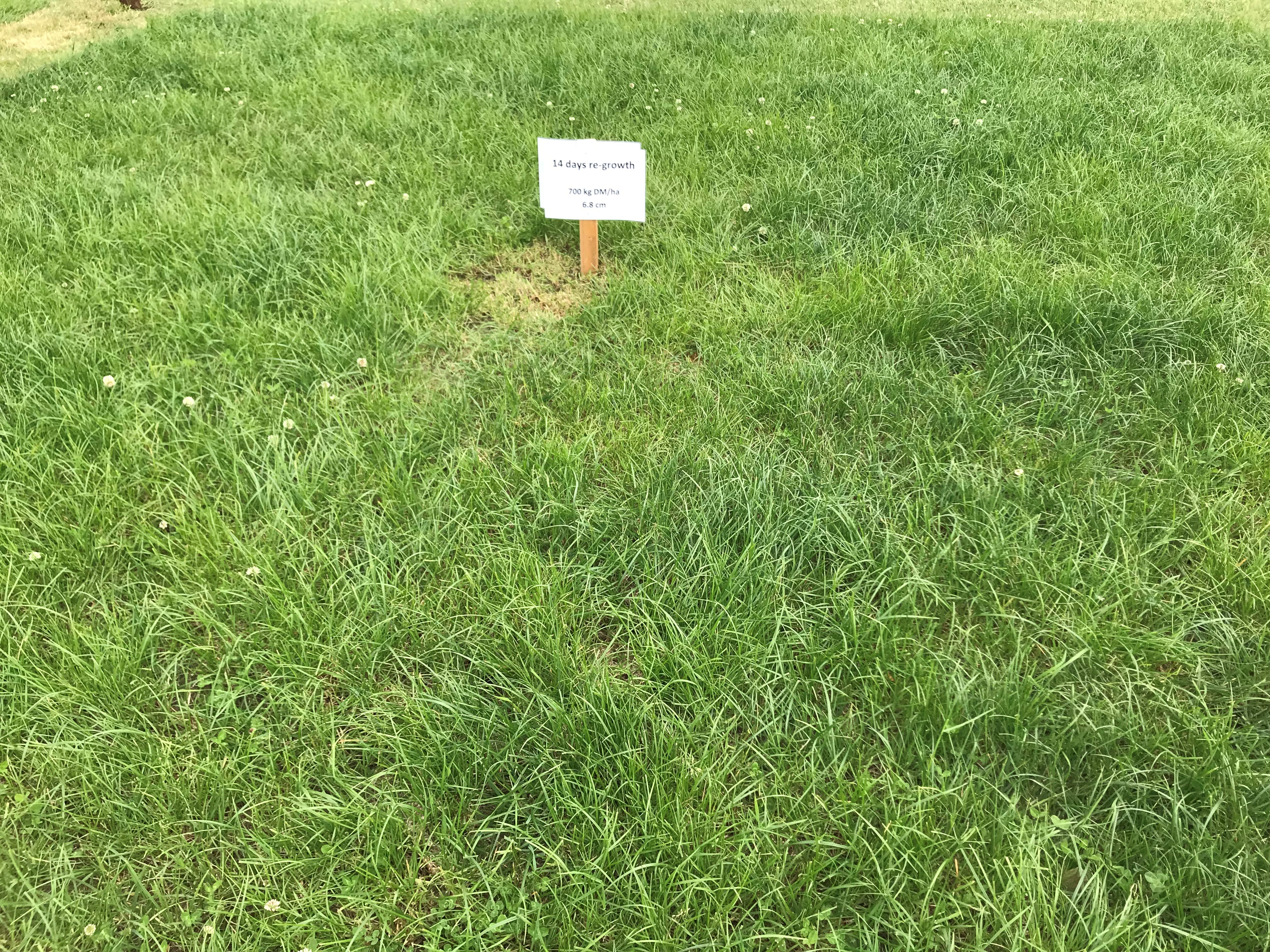 The previous five plots had all received good clean outs. However, plot six was grazed poorly on two occasions. The cattle were allowed to graze at the wrong height; the pasture had gone too strong.

As a result, there is a higher proportion of stem in the sward and this pasture is less digestible. The cattle will not graze this out as well as the previous plots. To achieve a good residual, farmers may need to top this sward and, by doing so, this may stunt regrowths.

A proportion of the stem can be attributed to the drought; when grass is stressed, it produces stemmy regrowths. This sward had been grazed four weeks ago and it had a cover of 2,850kg/ha and a height of 15.4cm. 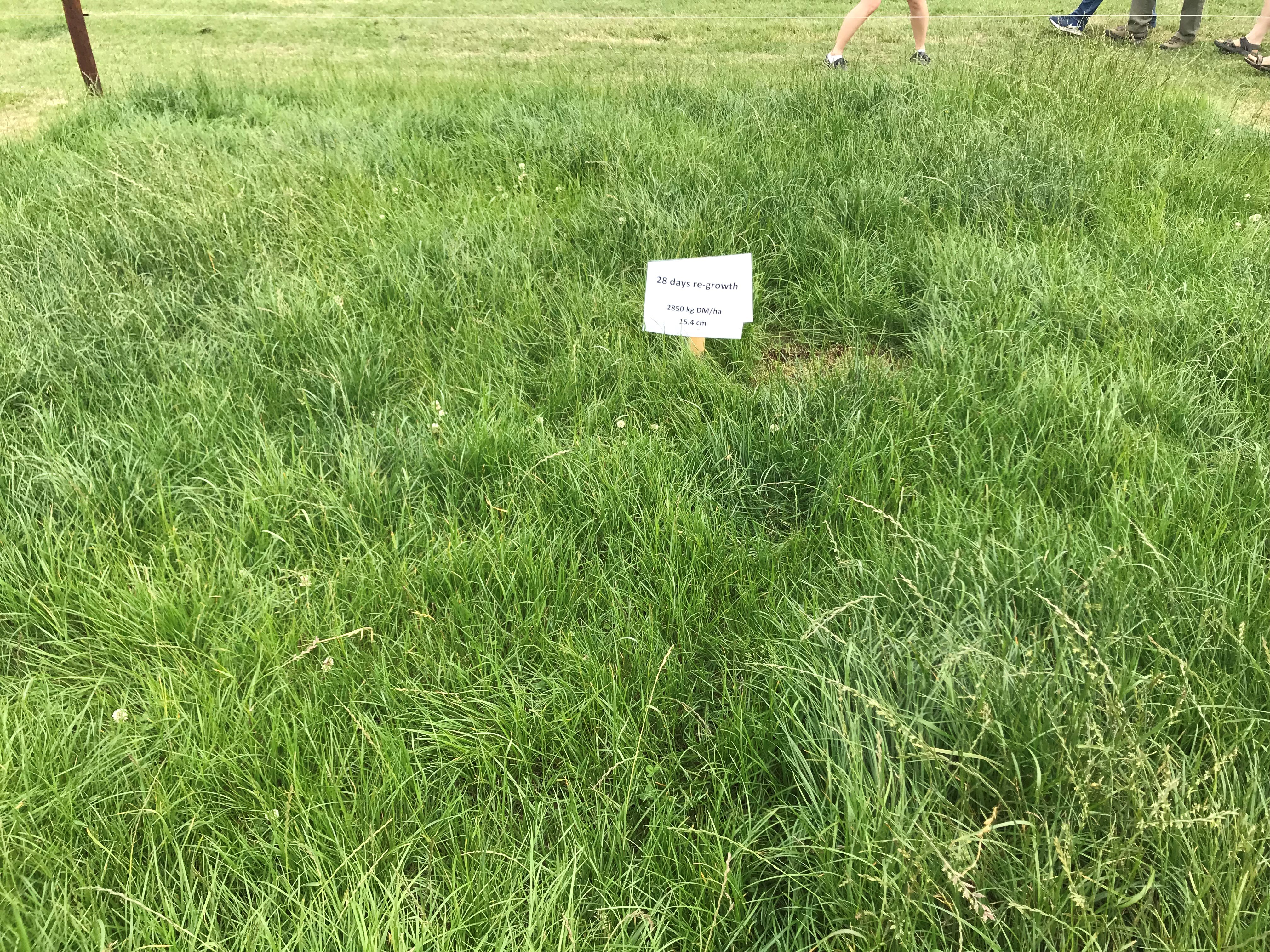 Plot seven demonstrated a sward which was poorly grazed. It was grazed to a residual of 7cm. Regrowth here will be of much poorer quality and it will be extremely hard to achieve a good clean out on the next grazing. 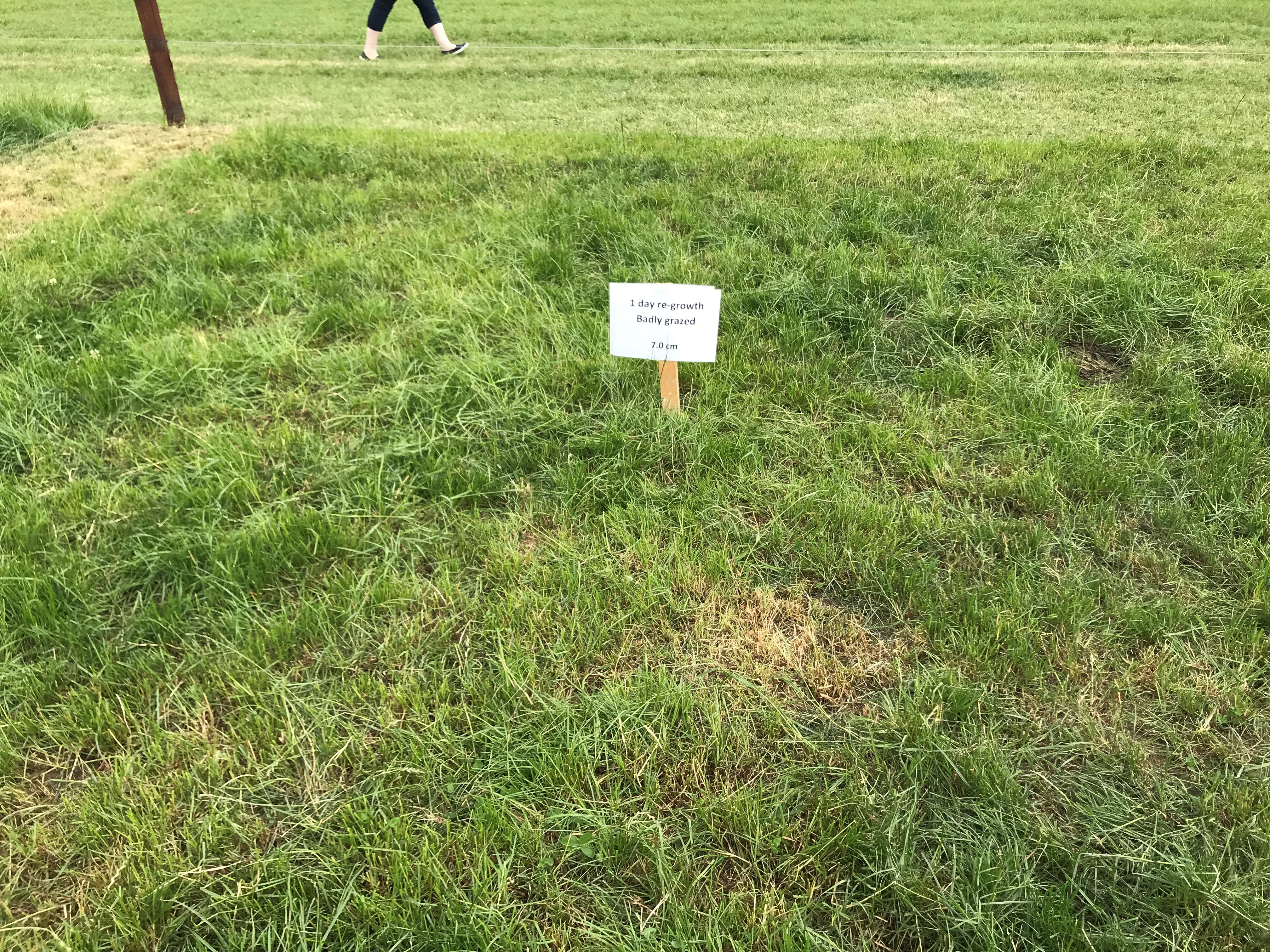 This plot represents a paddock which has gone too strong for grazing. It has a cover of 3,050kg/ha and a height of 16.2cm. This paddock should be earmarked for bales. 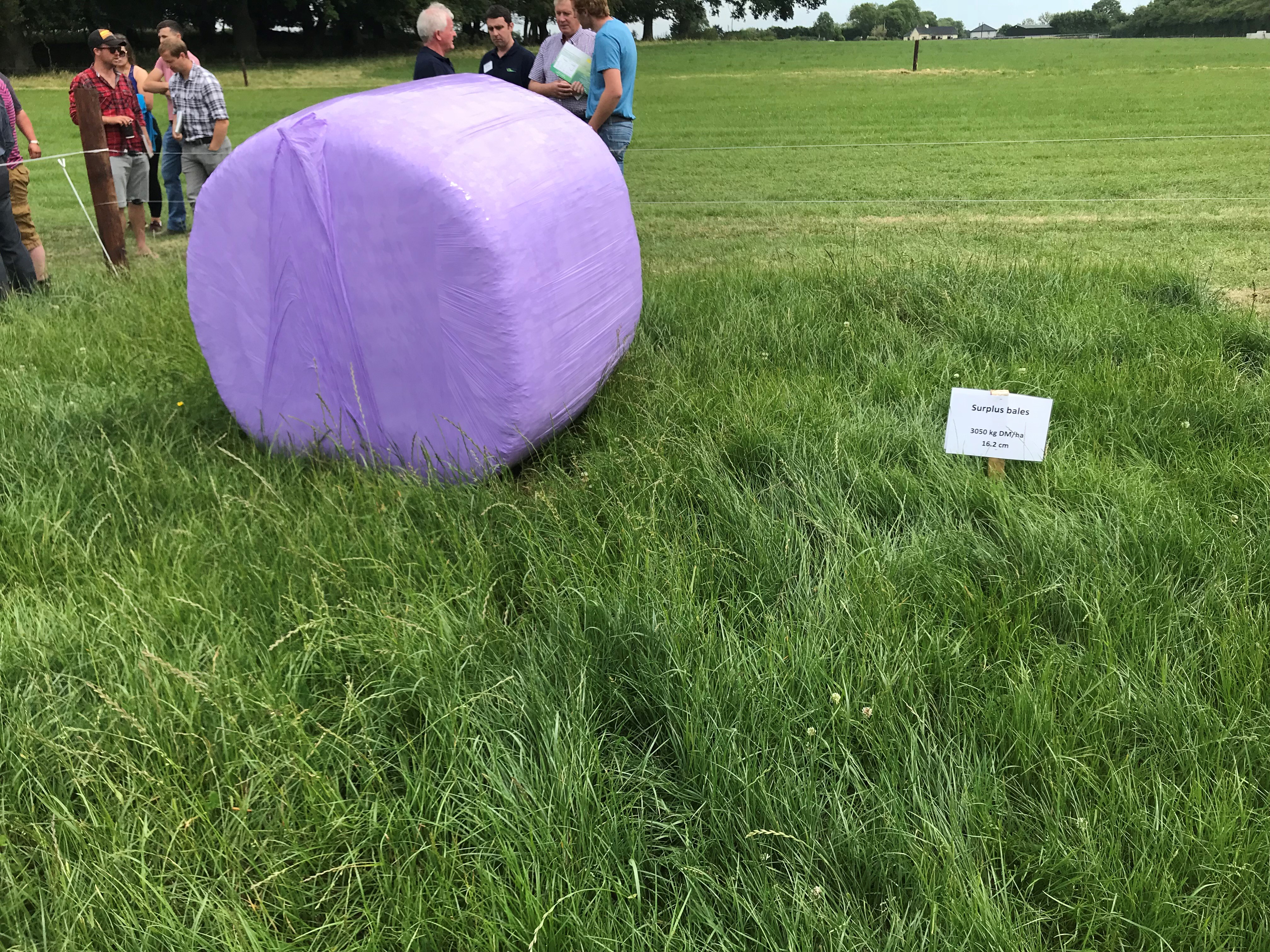