‘Due to weight limits, the beef grid is no longer fit for purpose’ 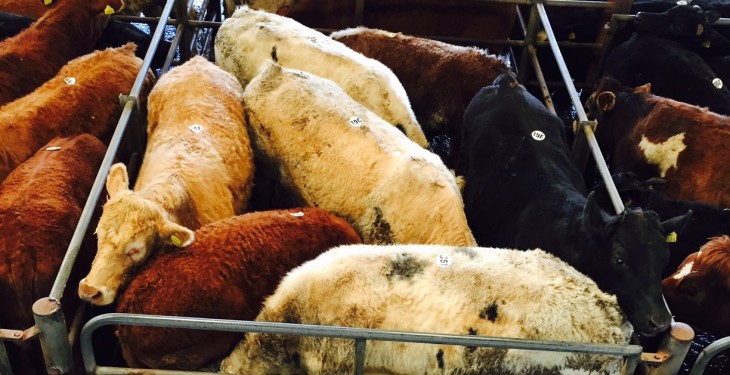 Due to weight limits, the beef grid is no longer fit for its intended purpose of rewarding top conformation cattle at the expense of lower grade cattle, ICSA Beef Chairman Edmond Phelan has said.

Phelan has also called for an immediate review of the grid.

“An ICSA analysis of the average weights for steers in 2015 demonstrates that weight limits will predominantly hit the better U and E grade cattle.

“Instead of U grade cattle getting a bonus as was the intended purpose of the gird when it was introduced, these cattle are now falling foul of weight limits and ending up with less rather than more of the base price.”

The ICSA has compiled a table illustrating their argument against the grid:

Table A shows that the average weights for all acceptable fat score categories (2+ to 4=) of U+ cattle and the vast majority of U= and U- categories are above the 420kg maximum weight being applied by most factories.

The range of weights here is 422-468kg. For the small number of E grade cattle, average weights are higher still.

However, the issue around U grades is significant. When the grid was introduced, U grade or better made up around 7% of the total steer kill; in 2015 U grades or better accounted for 11.8% of the steer kill.

Because these cattle are now deemed too heavy, farmers will be deprived of the bonuses that would have been legitimately expected when the cattle were bought and especially when they were bred.

The issue now points to a more fundamental one: whither the suckler herd based on many years of continental breeding?

“Is the meat industry sending a signal that it is time to forget about keeping suckler cows?

“Or is it that they just don’t want sucklers breeding export grade weanlings?”

‘The Grid cannot continue in its present format’

Phelan has said that from a beef finisher’s point of view, the grid cannot continue in its present format because farmers are losing every which way.

“We cannot tolerate a grid which imposes penalties on almost every category of animal.

“We always knew that there was a problem with under-fleshed or over fat cattle and that was accepted in good faith by farmers.”

The Beef Chair said that farmers also tolerated penalties on lower conformation cattle even though they are now told that these are exactly what the market wants.

“We were told that better conformation cattle had higher proportions of high value cuts; therefore they got a bonus to balance the penalties for other cattle.

“Now we are told that these cattle are too heavy so they are to be penalised too. This imbalance is not acceptable and therefore the gird must be suspended to allow negotiations on a new grid.”