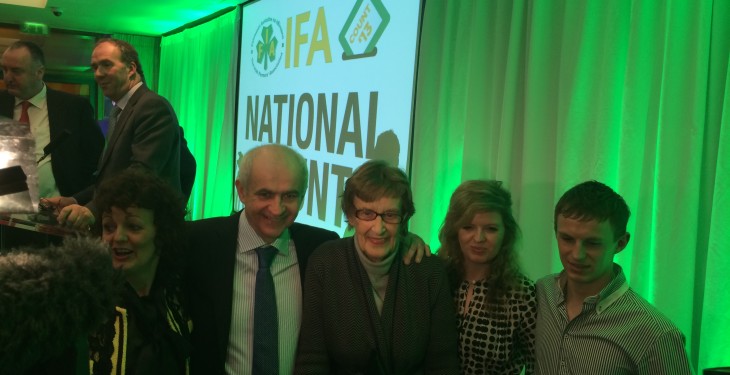 Eddie Downey, from Slane in Co Meath, is the 14th president of the Irish Farmers Association (IFA), carrying the day in the 2013 election by 1079 votes to the 779, notched up by Jer Bergin, from Co Laois.

Courtesy of his acceptance speech he lost no time in castigating the supermarkets for their buying policies that are, in his opinion, destroying the very fabric of Irish agriculture.

“The latest example of this is the disgraceful decision by retailers to cut the price of vegetables in the shops in the run up to Christmas. As a consequence, local producers, who have invested heavily in the growing of these high quality crops, have been left high and dry at a time when they have every right to expect a premium return from the market.

“I don’t care if supermarkets under cut the price of loo rolls or brush shaft but they must not sell food short.”

The president elect went on to highlight the many challenges that confront Irish farming at the present time.

“Agriculture has taken the brunt of the economic recession in this country. It is, therefore, crucially important for all of the support measures that were removed to be re-instated with immediate effect,” he stressed

Downey then went on to highlight the importance of the government signing off on a new Rural Development Plan (RDP) that will give genuine support to those farmers who need it most.

“That means putting in place a realistic environmental programme. It also means providing proper support for suckler cows and breeding sheep.  By doing this, the government will help ensure that those farmers who are in most in need will receive the help they need to survive.”

He continued: “IFA is a family farming organisation. Since our inception 60 years ago we have always stood for fairness across all the farming sectors. And I will strive to uphold all of these values over the coming four years.”

Downey will take up his new position on 14 January. One of the first challenges confronting him will be that of working through the detail of the new RDP. Agriculture Minster Simon Coveney is expected to announce the level of government support for the next RDP on his return from Brussels tomorrow.

The IFA has been campaigning heavily for the Government to co-fund the next programme. However, the betting money is on the Cabinet committing to between 45 per cent and 47 per cent of the total spend incurred.

Meanwhile Laois man Jer Bergin paid tribute to his hardworking supporters and said he was fully committed to supporting the new presidential team.