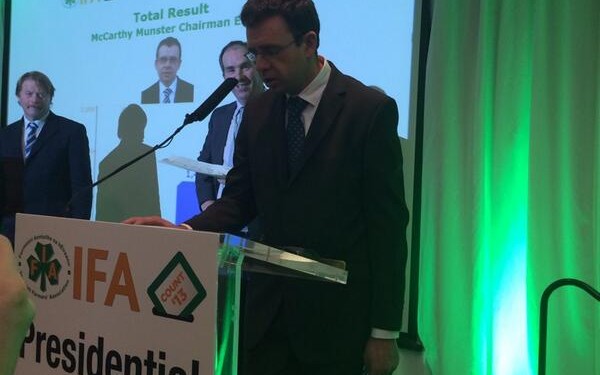 “‘IFA stands for fairness.” That was the key message communicated by the Irish Farmers Association’s (IFA) newly elected munster chairman James McCarthy.  A native of Currow in Co Kerry, he is currently milking 80 dairy cows.

“I have been actively involved with the IFA for the past 15 years, initially as Currow branch secretary.

“I have also sat on the National Dairy Committee and, more recently, have been a member of the National Farm Business Committee.”

McCarthy continued: “I have always held elected positions within the organisation and the experience gained over so many years in building up a mandate at grass roots’ level has stood to me during the most recent Munster campaign.

“I campaigned on a policy programme, which centred on delivering a fairer system of farm inspections and striving to ensure that problems concerning land eligibility plus the current mapping issues would be resolved quickly and effectively.

“Discussions on a new Farmers’ Charter will get under way in the New Year and  I am hopeful that many of the issues highlighted during my campaign can be effectively addressed within this forum.  I am particularly keen that farmers should be given adequate warning of inspections and that a more sensible approach will be taken by inspector when it comes to working through the details of the inspection process.”

McCarthy went on to point out that the IFA is the only organisation that represent all sectors of Irish agriculture.

“And we go about our business in a very fair and transparent manner,” he further explained.

“We are always striving to bring balance to the myriad challenges that confront farmers. For example, in the past, when cuts to direct support payments were made the IFA was successful in getting additional measures introduced to directly aid the cause of Ireland’s most vulnerable producers.

“The introduction of headage payments of suckler cows and the Sheep Grassland Programme are excellent examples of the work carried out by the IFA in this regard.

“I know that some critics of the organisations have been claiming that the IFA is not representing the interests of all farmers at the present time. However, this is totally untrue. The reality is that it takes a certain amount of time to redress a situation, once a specific inequality has been identified.”

Murphy concluded: “I will always fight my corner if I believe the IFA has made a mistake or is not representing the views of all farmer groups effectively. But once the debate on any issue has been concluded, I will support the organisation’s policies to the hilt.”