What a difference 19 votes can make? 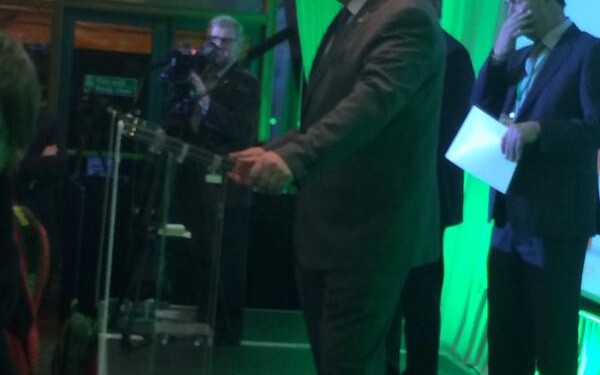 The final result in a very close election was Tim O’Leary 937 votes and JJ Kavanagh 918.

Initial results this morning showed O’Leary soaring ahead claiming Cork, Kerry, Waterford and Tipperary early on. But Kavanagh very quickly caught up, with most of Leinster coming out in favour of the New Ross man along with Connaught.

And at 6pm it came to a knife-edge. Top discussions between the two teams then took place behind doors and shortly after 6.30pm the Cork man was declared elected.

Speaking to a packed house in the Castleknock Hotel, O’Leary described the election campaign as a wonderful experience.

“Personally it has been a worthwhile exercise to travel the entire country. I visited every county and to see just what goes on in agriculture in every county in this country. And we have all got perceptions of what agriculture is like in Ireland and I tell you my perceptions have been changed I can tell you.”

In his acceptance speech, he also noted some disharmony on the ground with the association and encouraged the organisation to stand together.

“For people that wish to leave this organisation we hear one group of people that come to meetings and express their opinions at meetings and they are the opinion formers. And there are other large number of people outside their in farmyards across this country that have opinions too that normally don’t come to meetings. And would normally don’t speak when they come to a meeting. This exercise, this election, was a real worthwhile means of hearing their voices.”

He added: “One of our real strengths of an organisation, even though it is tough, the value an election campaign gives to us to understand the views around the country is immense. I am really gratefully to have that opportunity.”

In conclusion O’Leary said: “I am a farmer. I’m not a suckler, a tillage farmer, I am a farmer. That is what we are all here and this is our farmer association. My intention for the next four years is to do our damnedest as a team to lay our livelihoods,  our situation and our incomes down.”

And with that the new IFA deputy president paid tribute to his IFA colleague JJ Kavanagh and wished the joyful crowd a Happy Christmas and a Happy New Year.

Conceding defeat from the podium Kavanagh said: “What a difference 19 votes can make, but that is where we are. That is the result and we are going to accept the result here.”

He thanked his team, the people in Wexford for all the roads travelled and all the work done in the IFA campaign. “It has been an incredible journey, with a lot of learning. I’ve been to a lot of farms and I have met a lot of people farming.

In conclusion the Wexford man paid tribute to the new IFA deputy president and wish one and all a Happy Christmas.