‘Down to the wire’: 2 torn trailer tyres attract trouble

Gardai in Co. Tipperary recently stopped a jeep and trailer en route to cut grass following the discovery of severely defective tyres on the trailer being drawn.

In an account posted on the An Garda Siochana Twitter page yesterday (Thursday, June 21), Gardai made note of just how worn the tyres in question were.

The post read: “Is the grass greener on the other side?

Is the grass greener on the other side?

“Cahir Roads Policing Unit stop Jeep and trailer this morning. Two trailer tyres were down to wire and canvas.

“Vehicle grounded until tyres replaced. Driver was going cutting grass but failed to see the cuts in his tyres. FCN issued,” Gardai reported.

As noted in the tweet, the outfit was not allowed to leave until suitable replacement tyres had been sourced – and the driver received a fixed charge notice (FCN) to boot.

Meanwhile, in another road-related incident, a livestock trailer being towed by a tractor was involved in a collision with a Tayto truck along a stretch of Main Street in Kircubbin, Co. Down, yesterday (Thursday, June 21).

The street has been closed as a result of the road traffic collision, according to a tweet posted by the Police Service of Northern Ireland (PSNI).

Diversions have been established in the Northern Irish town, which is located on the Ards Penisula. 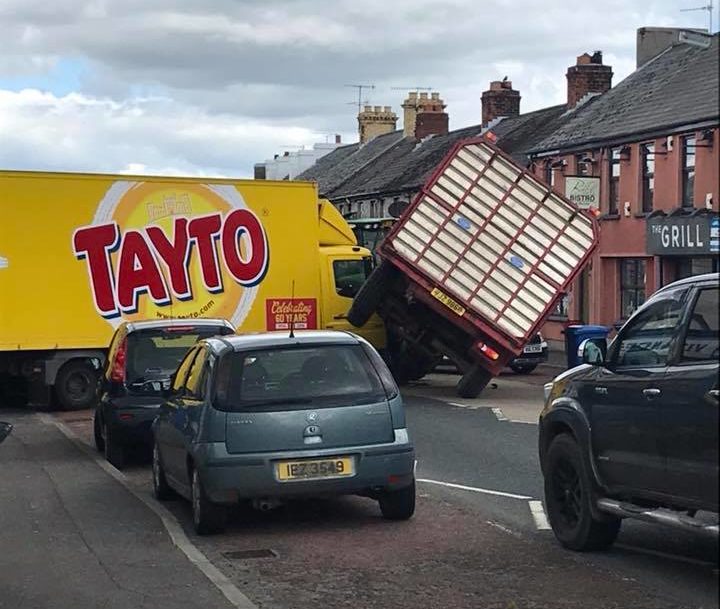 People driving in the area have been asked to avoid the street if possible.