A man has died on a farm in Co. Tyrone over the weekend, the Police Service of Northern Ireland (PSNI) has confirmed.

Police attended the sudden death of a man, aged in his 60s, in the Coolaghy Road area of Omagh on Sunday morning (September 2).

A post-mortem is due to take place to determine the cause of death; however, this death is not being treated as suspicious at this time, a police spokesperson informed AgriLand.

The Health and Safety Executive has been informed, the spokesperson said, adding that there are no further details at this time.

A spokesperson for the Health and Safety Executive of Northern Ireland (HSENI) has said that the authority is aware of a fatality on a farm in the Ardstraw area and is investigating the circumstances.

“Our sympathy is with the man’s family at this most difficult time,” the spokesperson added.

This follows a month of relative calm during August. Back in July, a man had to be airlifted to hospital after falling into a slurry tank on a farm in Limavady, Co. Derry.

A spokesperson for the Northern Ireland Ambulance Service said authorities were alerted to the incident at about 10:30am on Wednesday.

“We were informed that a male had fallen from a roof into a slurry tank on a farm in Limavady. He was fully conscious and breathing at the time,” the spokesperson said.

Two accident and emergency crews were deployed to the scene, along with one rapid response paramedic and a Northern Ireland charity air ambulance.

The man was treated at the scene and was flown to the Royal Victoria Hospital in Belfast for further treatment. 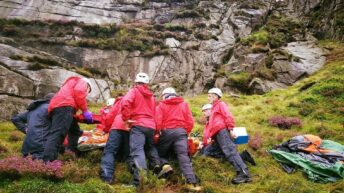