Dealing successfully with the challenge of coccidiosis in Co Mayo 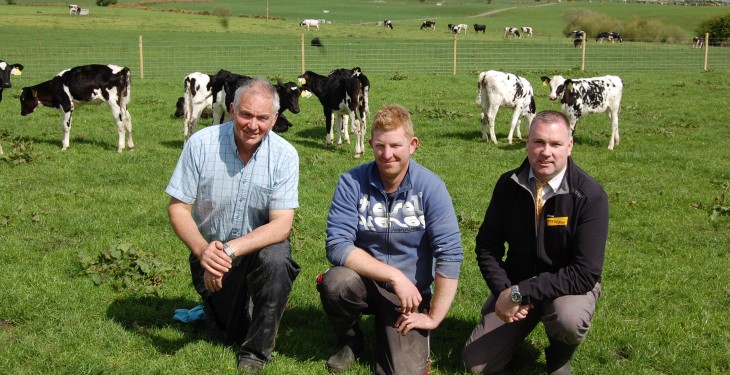 The challenge that is coccidiosis is now rearing its head on one in every three dairy and suckler beef farms throughout Ireland.

Caused by a prozoan parasite, the condition affects young calves from six weeks of age onwards and manifests itself in the form of black dung and significantly reduced growth rates. This is a direct result of the damage caused to the intestinal wall by the ingested parasite.

Jim Egan milks 140 high quality Holstein Friesian cows on the outskirts of Claremorris in Co Mayo. He supplies Aurivo Co-op.  Calving the year round, the current Spring calving group  is averaging 30 litres of milk per day at 4.05% butterfat and 3.30% protein.  Jim works closely with his herd manager Tony Golden.

Every effort is made to give calves the best possible start. This includes offering large volumes of colostrum in the twelve hours directly following the birth of each calf and ensuring that the new arrivals have access to meal from a very early stage. Spring born calves are put out to a grass paddock adjacent to the farm buildings, where concentrate is continuously available courtesy of a creep feeder. Both Jim and Tony are both committed to calving heifers at 24 months of age

“We never had a coccidiosis problem until last year,” Jim explains.

“Initially, our attention was drawn to the black coloured dung which the calves  started to put out and the fact that they were starting to fail quite badly.  At first we thought this was a scour issue but soon realised that we were dealing with a problem that was much more serious in nature.”

Tony Golden takes up the story:“We were recommended to drench the calves with Vecoxan, which we did. There was an immediate improvement in the condition of the animals. This year, again, we noticed the calves started to put out black dung at around six weeks of age. They were immediately with Vecoxan and I am delighted to confirm that they suffered very little setback at all.

Vecoxan is manufactured by Elanco. The company’s Ronan Kilcommons was a recent visitor to the Egan farm.

He explained:“Once the initial risks of nutritional scour and viral diseases have passed, a common scour threat in calves is coccidiosis. This one-celled parasite can have a devastating impact on growth of young stock and consequently on profits. Fortunately, the animals raise immunity to this organism but unless the systems are in place to allow this to happen, coccidia can overgrow and cause serious damage to the gut lining.

“Timing of treatment and management of the environment are essential to combat this disease. The parasite has a 3 week lifecycle and during this time can replicate from one organism to 16 million. The organism is ingested by eating oocysts from faeces. Therefore reducing contamination of feeding and drinking troughs can reduce the burden of disease considerably. Clean bedding and footbaths between pens can also assist in the reduction of transfer of the coccidia.”

Ronan went on to point  that treatment must coincide with exposure to the disease to be effective long term, as the animal’s own immunity needs to recognise the organism and be able to raise its own immune response when it is challenged again. Colostrum antibodies provide protection for up to 3-4 weeks and then wane. It is only after this that the animal’s own immune system can react.

He added:“Treatment is usually targeted at 4 – 6 weeks of age, to ensure exposure and subsequent immunity to develop before the next 3 week lifecycle attacks the gut. If the organism is allowed to go untreated, it may result in damage to the gut lining. This can take up to 4 weeks to recover. The consequence is that any food ingested is not absorbed at an optimal rate and will show up in growth targets being set back by a similar length of time, thus increasing feed, labour and veterinary costs.

“Large numbers of eggs can accumulate in the dung directly adjacent to feeders. As a result, there is merit in moving a creep feeder to different locations within a field as the grazing season continues. What’s more, if coccidiosis rears its head with early spring born calves, it is likely to become a bigger problem again with animals born later in the season. This is because of the build-up of egg numbers on the farm.”