Dairy focus: Why one 700-cow farm decided to go down the robotic milking route

Milking 700 cows just outside Ardstraw, Jason Mitchell is the fourth generation of his family to milk cows in Co. Tyrone. Operating a year-round calving and housed system, Jason’s operation is quite unique in that the farm is home to six DeLaval milking robots and a 50-unit rotary parlour.

A total of 1,300ac are farmed. 170ac of maize and 100ac of winter barley – for wholecrop – are grown on the farm each year. Next year, it’s planned to see the introduction of 100ac of barley for combining to provide the farm with grain and straw.

AgriLand recently made the trip up north to find out more and to see why Jason decided to install six DeLaval VMS milking robots earlier this year.

Jason explained: “The new unit has housing for 390 cows with six DeLaval robots, and that started in March.

“We run a 50-point rotary in our existing yard. At present, we’re milking stale cows and mid-lactation cows – approximately 300 cows – on the rotary twice a day. 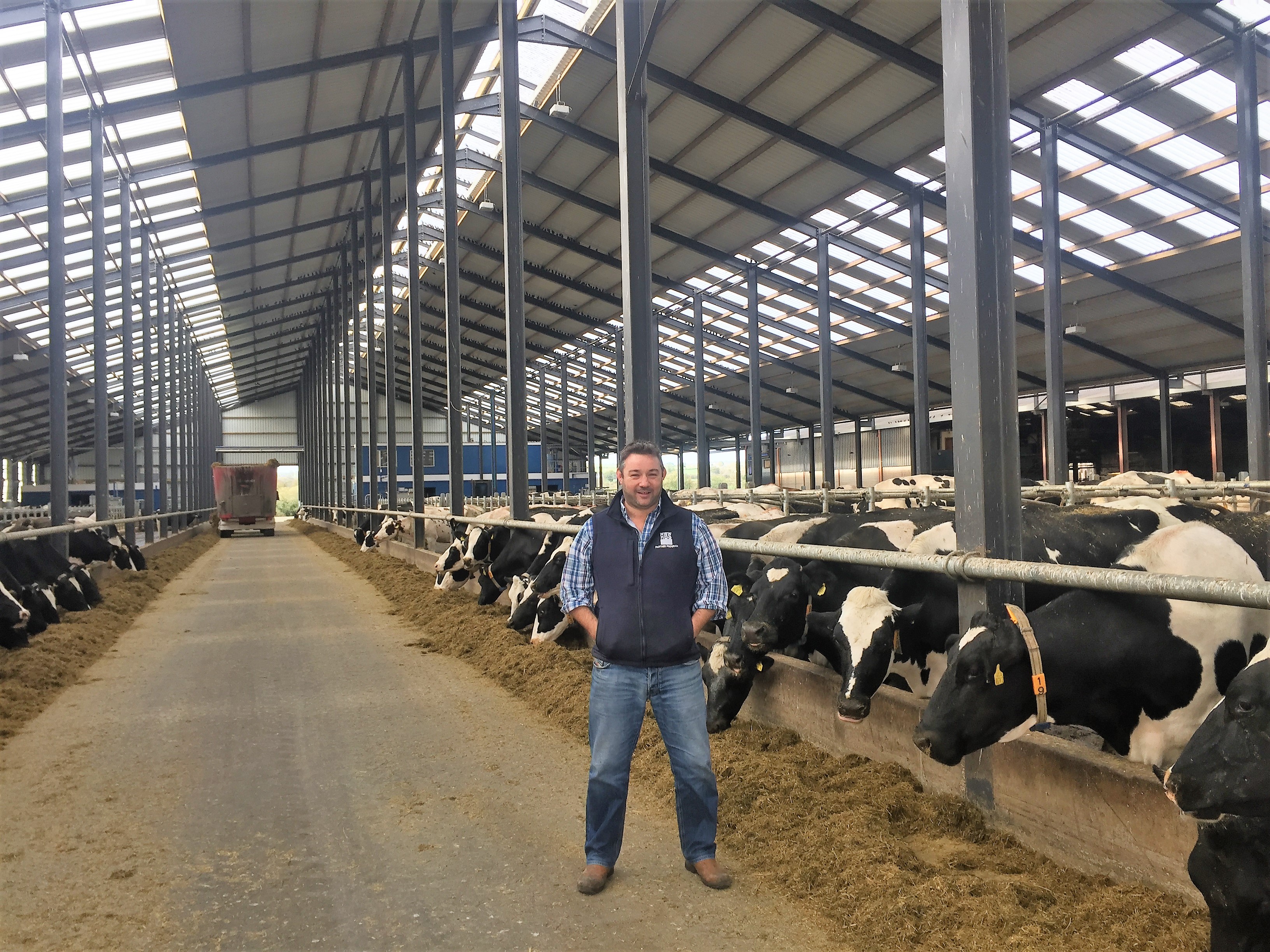 “We used to milk three times a day here; but since we moved onto the robots, we’ve been able to drop it and get the higher-yielding cows on the robots.

“We are going to put in two more robots in early 2019. One of the main reasons is that we are having to take cows off the robots too early, when they’re still in the high-production period, to let the fresh animals onto the robots.

“We’re hoping to run eight robots and then reduce it to about 200 cows in the parlour; they will mostly be all stale cows or cows that are not high enough production for the robots.”

The robotic route and the benefits

For Jason, one of the main drivers for making the move to robotic milking was to make the farm an attractive place for the next generation to come home to farm.

“I have a son coming through and I knew that the system we were running – three times a day milking – wasn’t an attractive prospective for a young man. That was a big driver.

“One thing I have noticed here since we installed the robots is we’ve made a lot of improvements. Previously the focus was on the system.

“But we built this unit with consideration to the cow, the man and staffing requirements. The staff are not stuck in the parlour all of the time now.

“We haven’t reduced staff numbers significantly; but what we have done is really improve the management, which has led to a situation where – on average – we are producing 100,000L/month more milk over the last four months from the same about of meal as the previous year.

“Is that all down to the robot? No, but what it is down to is we have focused hard on getting cows back in calf. We are doing a lot of routine foot trimming and the staff have got time to actually look after the cows rather than spending time in the rotary.

“We have also given the cow maximum comfort, more feed space and we’ve let the cow behave without an awful lot of interaction from people. The same thing happens to the cow every time she goes in to be milked.”

“It has also given us more time to work with the cows in the old yard. I’m able to go into the robot shed in the morning to make sure everything is OK and then slip over next door to the other unit.”

In addition, Jason has also installed a DeLaval Herd Navigator, which is essentially an on-farm lab. With this system, information on urea, cell count, progesterone and milk quality is recorded. The investments made on the farm were made with the aid of the Tier II scheme in Northern Ireland.

Before finally settling on the DeLaval automatic milking system, Jason spent a considerable amount of time looking at the various options available on the market.

He added: “What I liked when I went to see this system was the amount of milk that was actually being taken out of the robot. 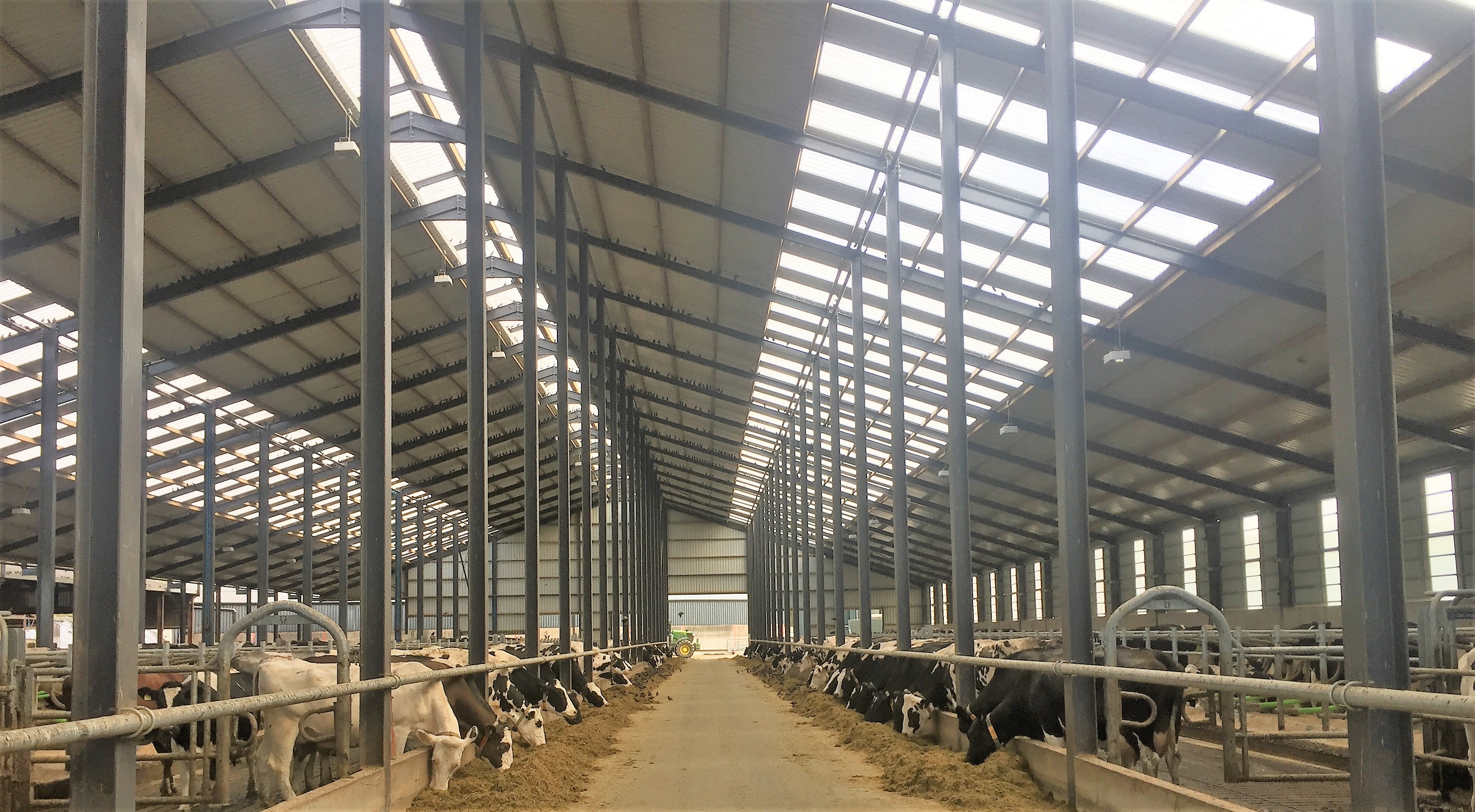 “One thing that stuck out to me when I was going to equal herds with different robots was that one robot was doing far more yield (total quantity of milk) on a daily basis than the other.”

After some thought, Jason concluded that this difference occurred due to the guidance system – the way cows were moved through the robots – being used.

With this information at hand, Jason opted to install the DeLaval robots with a ‘milk first’ guidance system. One-way gates are located throughout the shed and when cows want to access feed from the cubicles, they have to exit these gates and head to the robots.

If cows are ready to be milked, they will be granted access to the robot; if not, they’ll be diverted back to the face fence. 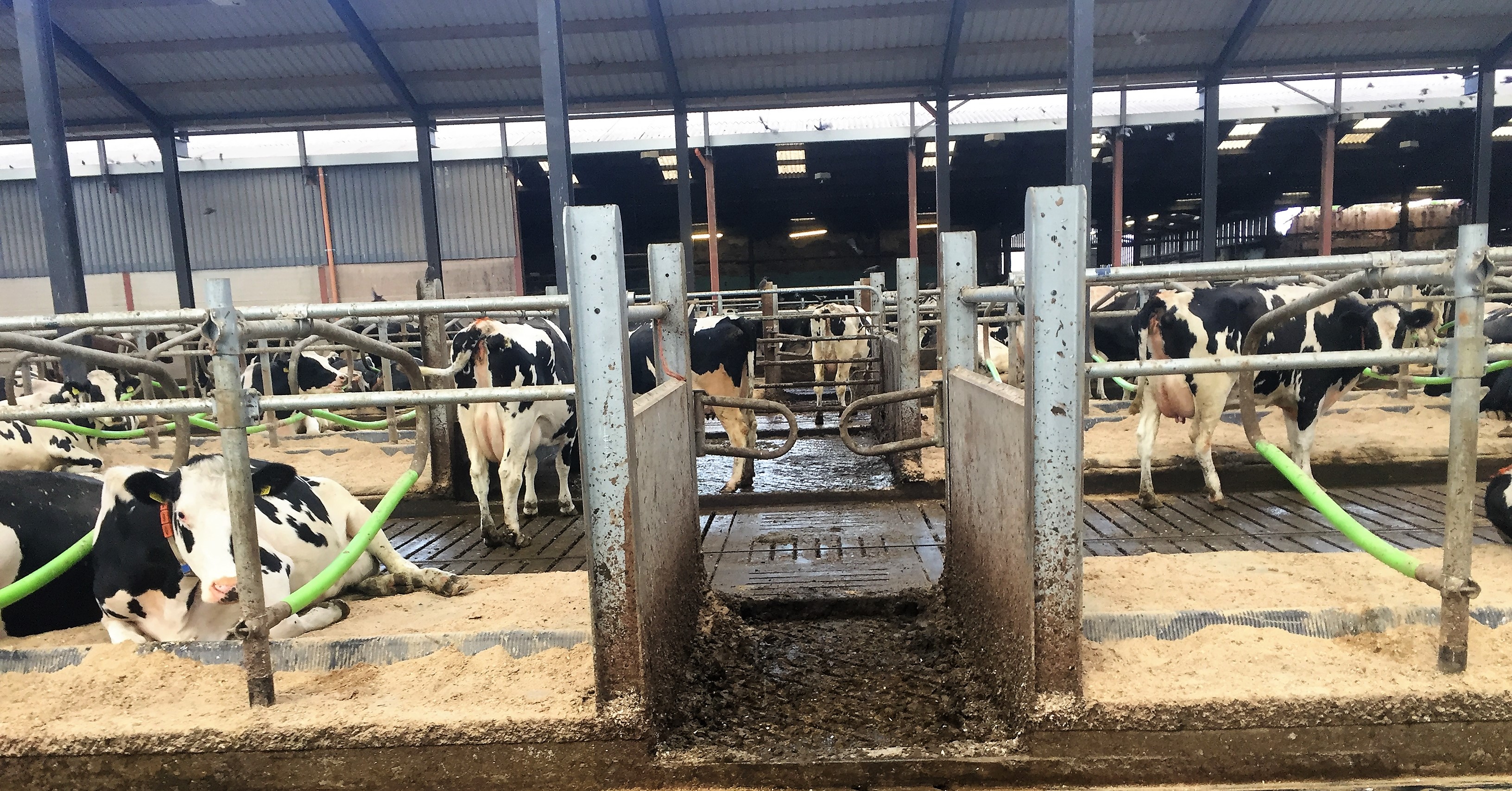 With this system, he explained: “We are being more efficient with the robot. Every time the cow gets up to feed, the milk first gate decides if she hits her predicted yield. If she doesn’t hit her predicted yield, she’s passed on through to the feed fence.

“So every time the robot accepts a cow, the cow is ready to milk and that lets us achieve higher numbers of cows on the robots and also higher average milkings.

“We are looking for an average of 13kg/milking; that doesn’t matter if that cow is doing 26L/day or 66L/day.”

This system has also allowed Jason and his staff to continue to feed concentrates through the diet feeder, as part of a TMR diet. 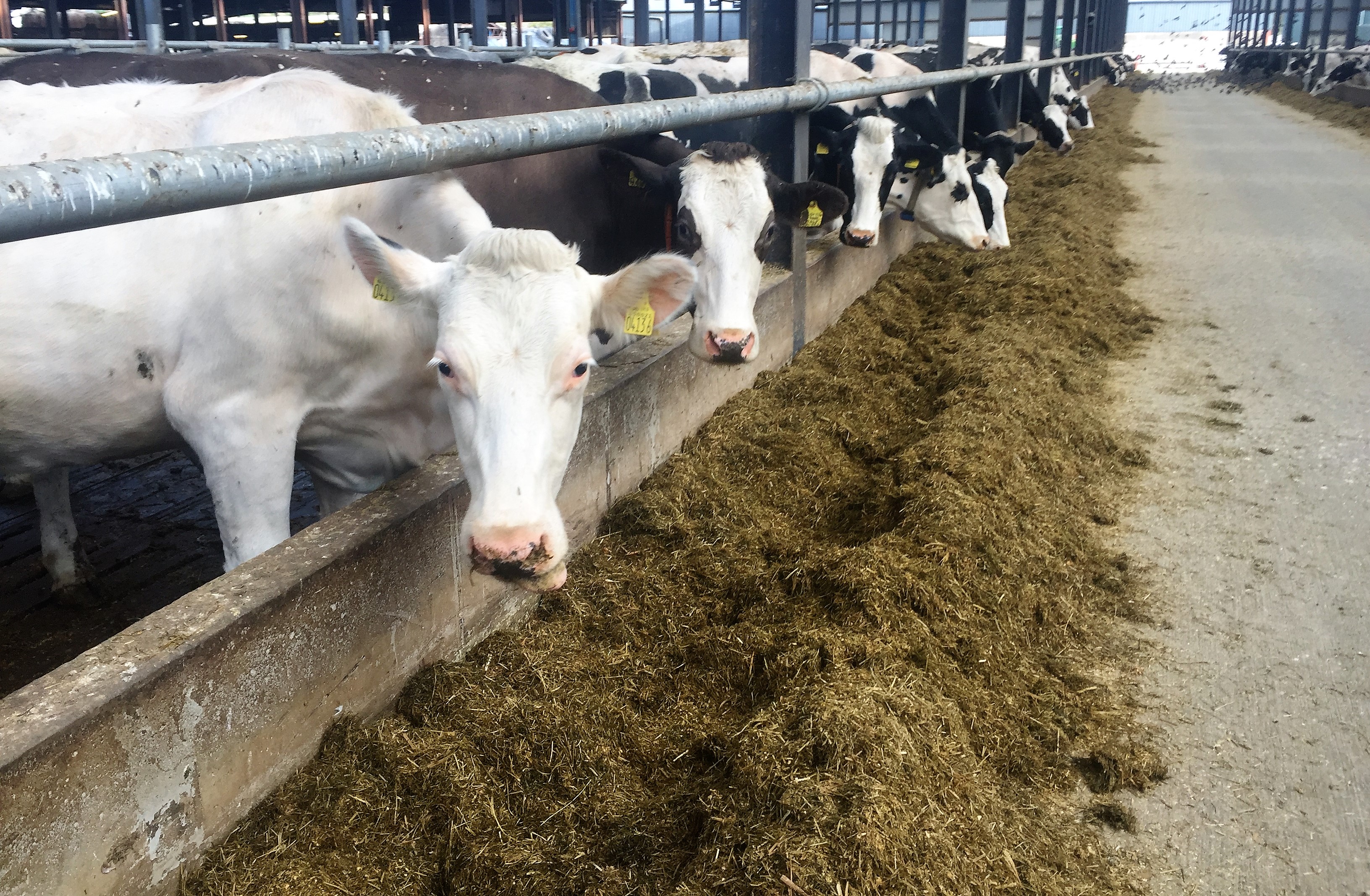 “We always believed that you can’t put all of the meal into the cow every time she goes to get milked; you could end up with all sorts of issues with the cows.

“We’re not actually feeding that much meal in the robot. If you want a cow to do 60L/day, you will get it by feeding at milking, but you will burn the cow out if you put it all through the parlour because she’ll not eat enough forage.

“The attraction is the nut. If she’s eating a Mars bar at the time, why would she go and eat the lettuce?

“But with the milk first system, I can still feed heavily at the feed fence. We’re feeding 9kg/day to cows at the feed fence and we’re still getting them to come to the robot, which is sort of unheard of.

“We’re mixing our own meal and – depending on how we buy – we are saving 20% on meal costs as opposed to buying a cubed (pelleted) nut.

“If we couldn’t mix the meal ourselves, we were going to lose the saving that we’d made on home mixing. What would be the point in putting in a system that would force us to lose that 20% saving by giving an extra £20/t to have meal pelleted and fed through the robot?”

With the system that’s installed, Jason is still able to feed heavily at the feed fence. Cows are currently being offered 75% of the daily concentrate allowance at the feed fence, while just 25% is fed through the robots.

This system is working for Jason. As mentioned above, he’s witnessed a 100,000L/month increase in the quantity of milk produced when compared to the same time last year. That has been achieved with the same level of total meal feeding across the herd.

When looked at on a kilogram of concentrate per litre of milk produced basis, Jason’s herd has improved from 0.44kg/L to 0.35kg/L since the robotic system was installed, thus justifying his thinking on the best method of feeding his cows under a robotic milking system.

“There was not point trying to reduce the kilogram of concentrate per litre of milk produced from 0.44kg/L down to 0.35kg/L and make a 20% saving and then give it away for a more expensive nut, which normally costs us 10-15% more,” he added.

As it stands, the cows in the herd are entering the separation gates 7.5 times each day; the average number of milkings is 2.9; and the average box time is 6.5 minutes.

Along with the above, the system also allows Jason or members of the team to draft out cows when necessary.

“With the guided system, we have complete control of that cow. Pauric could come in and set the system up and the cows that he wants for the evening or the morning will be drafted out. The guidance system has given us the freedom that we have very little cow collection.”

Jason teamed up with Genus’ genetic management system (GMS) in a bid to try and breed the “perfect robot cow”.

With this, a special emphasis has been placed on teat placement, milk flow, longevity and a number of other variables when it comes to breeding the next generation of cows. 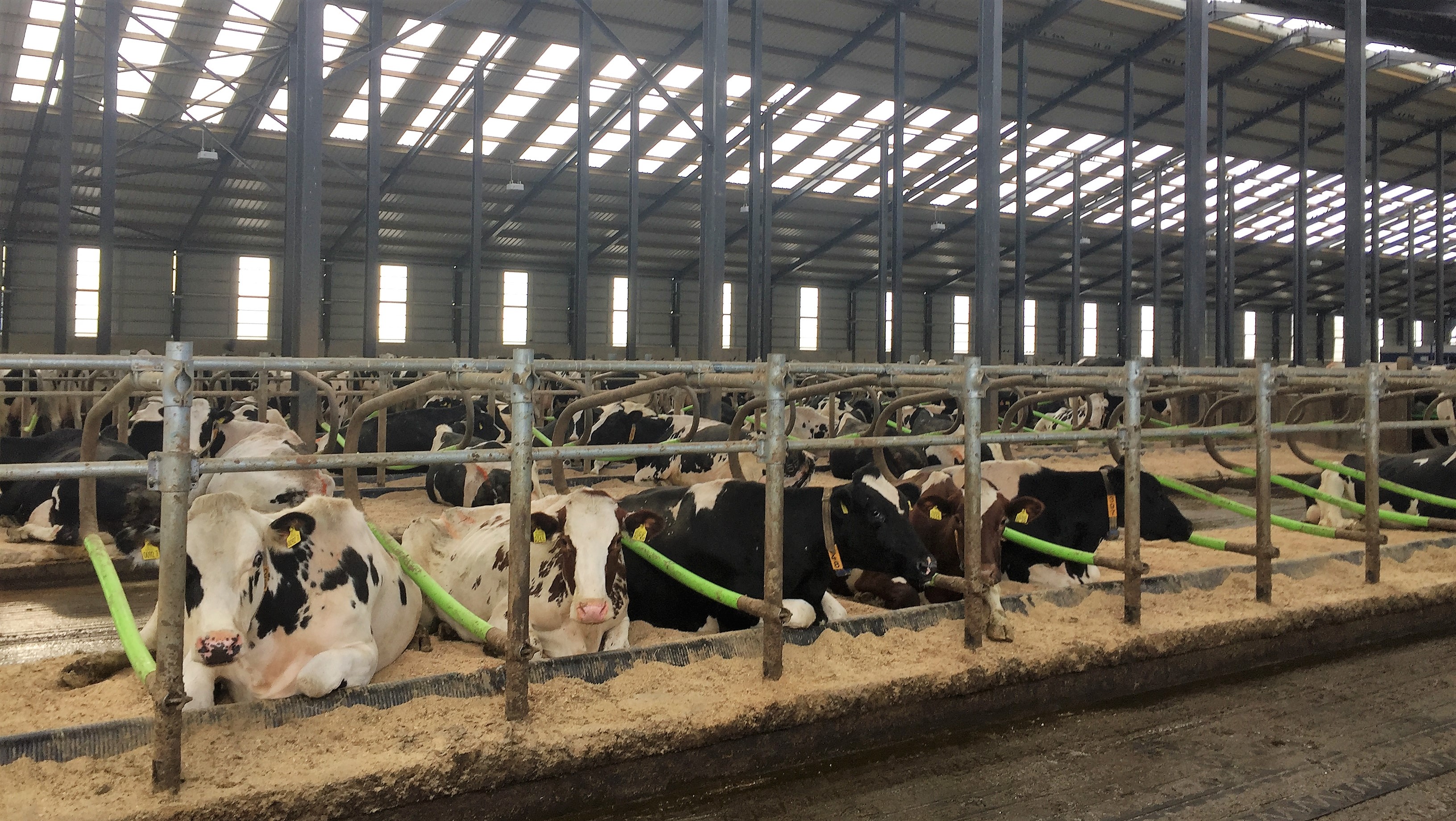 As Jason is operating a year-round calving system, approximately 10 cows and five heifers are bred on the farm each week.

He explained: “We target our best cows with sexed semen – even the second, third and fourth calvers – to try and enhance the rate of genetic progress.

“Traditionally, we were running a flying herd and five years ago – in the pre-quota era – we decided we had to start rearing our own stock because we didn’t think the availability of stock would have been there.

“This has not necessarily come true; but we have noticed that the quality of our stock has improved. We are just calving down the first of our home-bred third calvers now, which are doing exceptionally well and we are hoping for more of the same and better in the future.

“The Herd Navigator has given us the ability to speed up our genetics. Now, with the amount of detail we are getting off the robot, we are really able to hone in on the key elements of what’s required for cows on a robot farm.”

The above information, Jason said, has allowed him to pin-point problem cows earlier and to prove treatment earlier where it may be required. 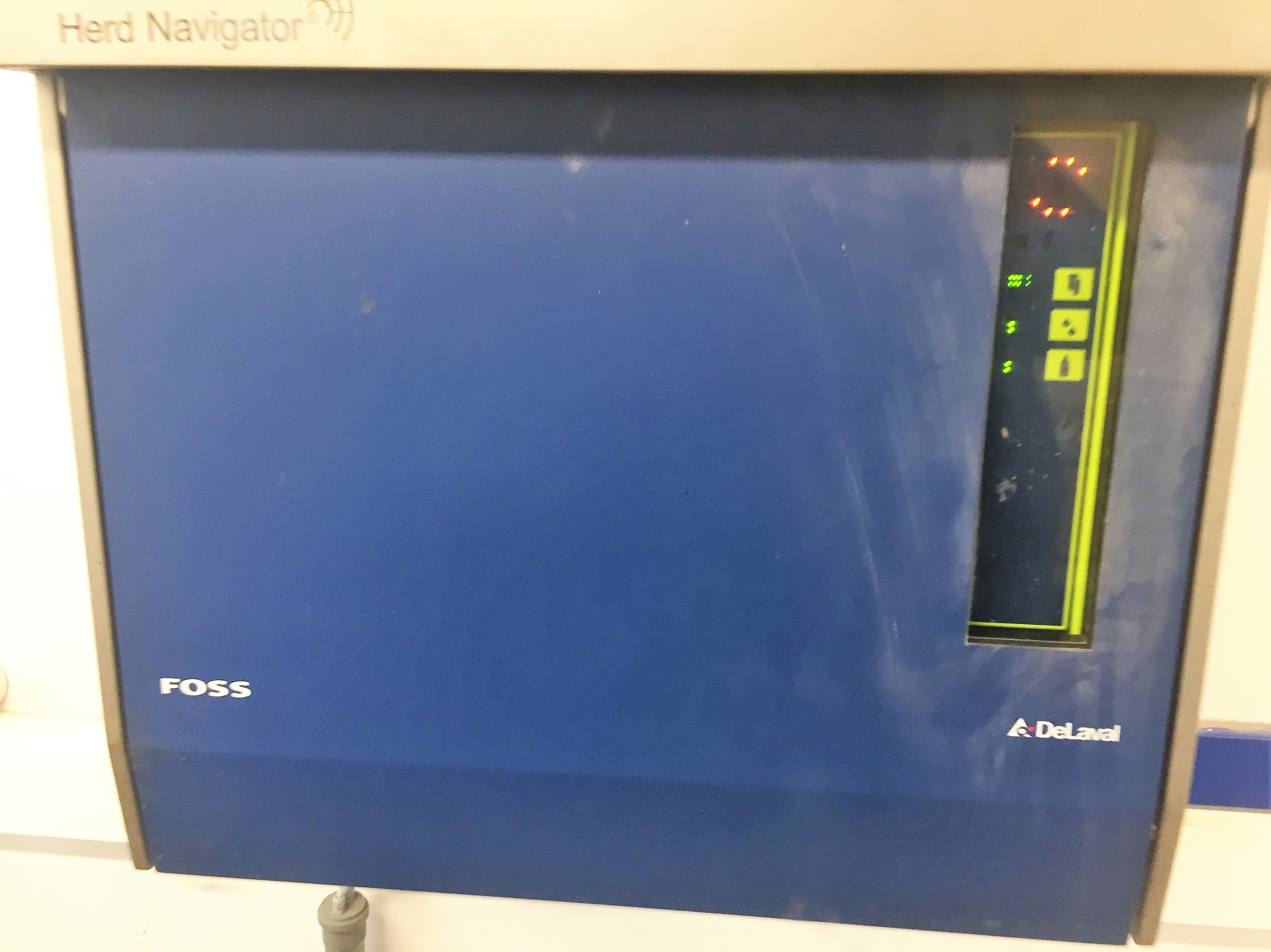 Touching on herd performance, Jason said: “We have cows doing over 70L/day and they are milked five or six times each day. We also have cows being milked twice a day.

“The average yield per milking currently is 12.5kg. We’re hoping to drive that a bit more and we can see that improving all of the time.

Along with the dairy business, Jason runs Greenville Energy off the same site in Ardstraw.

Explaining how the two businesses interact, he said: “We built the biogas plant in 2011.

“In the last nine-to-12 months, we added a world’s first – an LBG (liquefied biogas) plant – so any excess gas that’s produced and that’s not recovered by our two CHP (combined heat and power) stations is recovered.

“We are liquefying the gas, which we are hauling to other CHPs; we are also able to recover the CO2 now and leave that as a salable product. 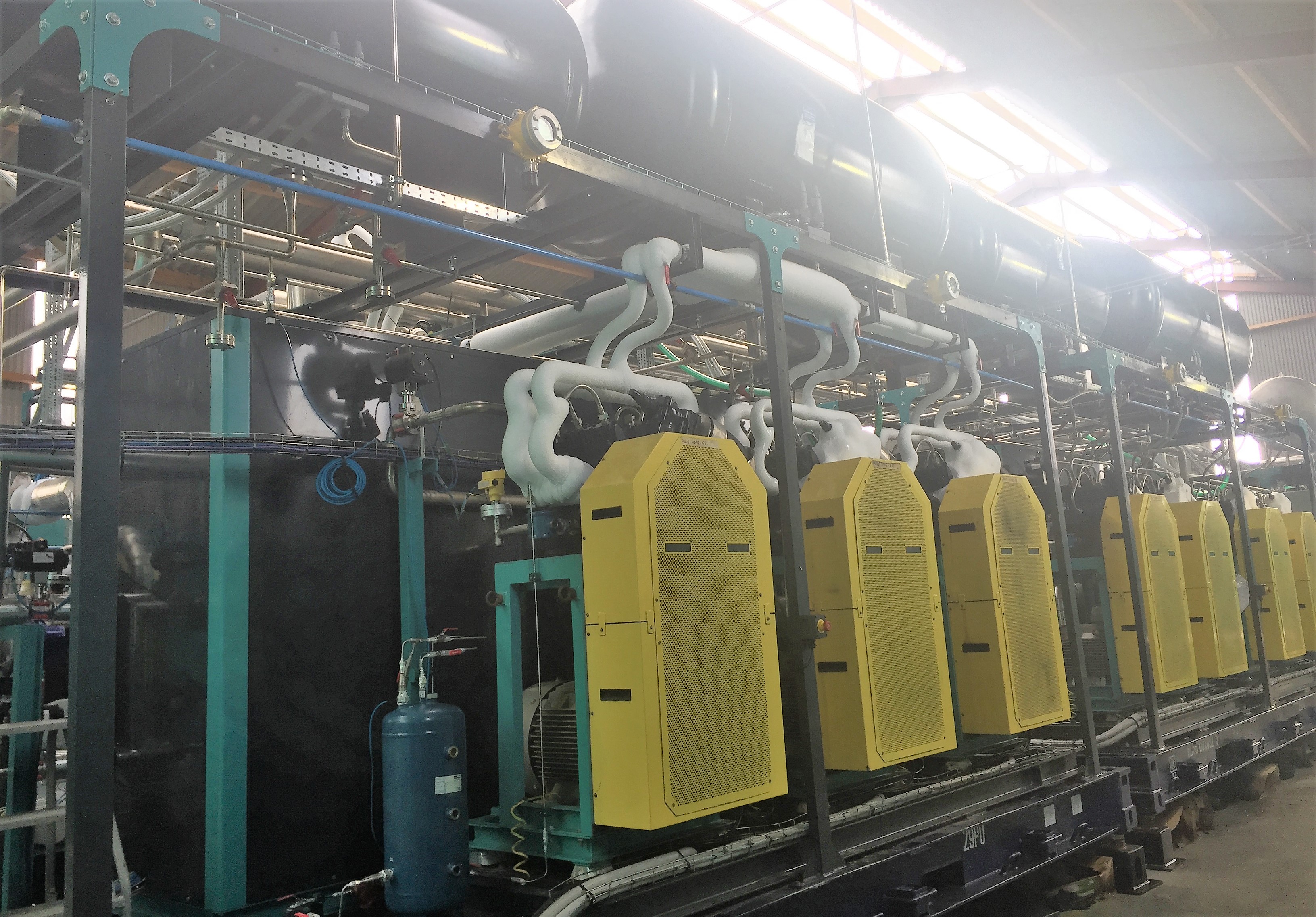 “Both businesses work well together; what we need in the anaerobic digester (AD), the farm has and what the farm needs, the AD plant has.