Dairy focus: Swapping black and white for red and white in Co. Cork

Farming just outside Kilworth, Co. Cork, Mike Dunne’s dairy farm is slightly more unusual than most, in the sense that his herd is predominantly made up of Norwegian Red genetics.

Mike – who is dairy farming in partnership with this father, Tom, and uncle, Michael – was the host of this year’s Macra Dairy Tour which took place today, October 26, as part of Macra’s Annual Conference.

Mike is the fifth generation to look after the family farm after finishing up college, a year and a half ago, and returning home to work full time along side his dad and uncle.

The family have grown the herd over the years and, after quotas were abolished, it gave them the scope to grow further, increasing from 250 cows to today milking 370 cows. 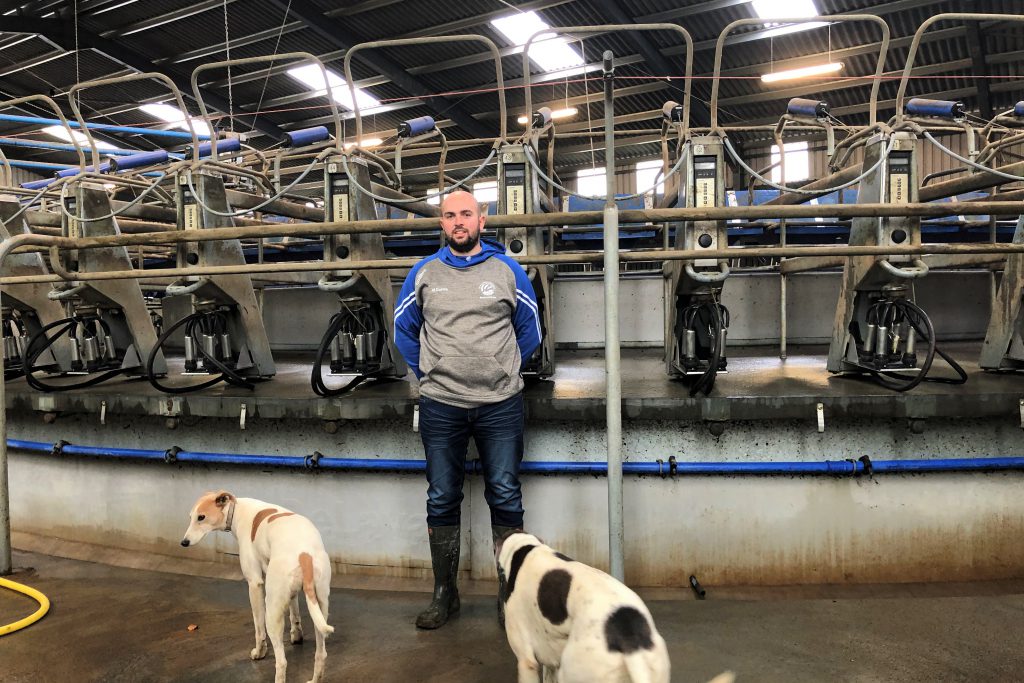 As the herd size increased, the milking time got longer and so, in 2014, the then 16-unit double-up parlour was upgrade to an impressive 60-unit DeLaval rotary parlour.

Commenting on the production performance of the herd, Mike said: “Last year, the herd produced over 500kg of MS/cow and yielded between 6,500L/cow and 6,700L/cow; this was met through feeding just short of 1t of concentrates per cow.”

On the day AgriLand visited the farm, the herd was producing 14L/cow/day at 5% fat and 4.3% protein; so just over 1.3kg of MS/cow – with 4kg of concentrates per cow being fed through the parlour. No silage has been fed on the farm yet.

It is a spring-calving herd and is made up of high-EBI Norwegian Red and Holstein-Friesian cows. The EBI of the herd is €158. However, the family’s ambition is to milk a full pedigree herd of Norwegian Reds in the future.

“We started crossbreeding with Norwegian Reds about 20 years ago. Now the herd is made up of about 75% Norwegian Reds. They are a 50:50 split between black and white and red and white in colour.

“We try to pick red bulls just because of the name Norwegian Red, but we used some black and white bulls this year too,” he added. 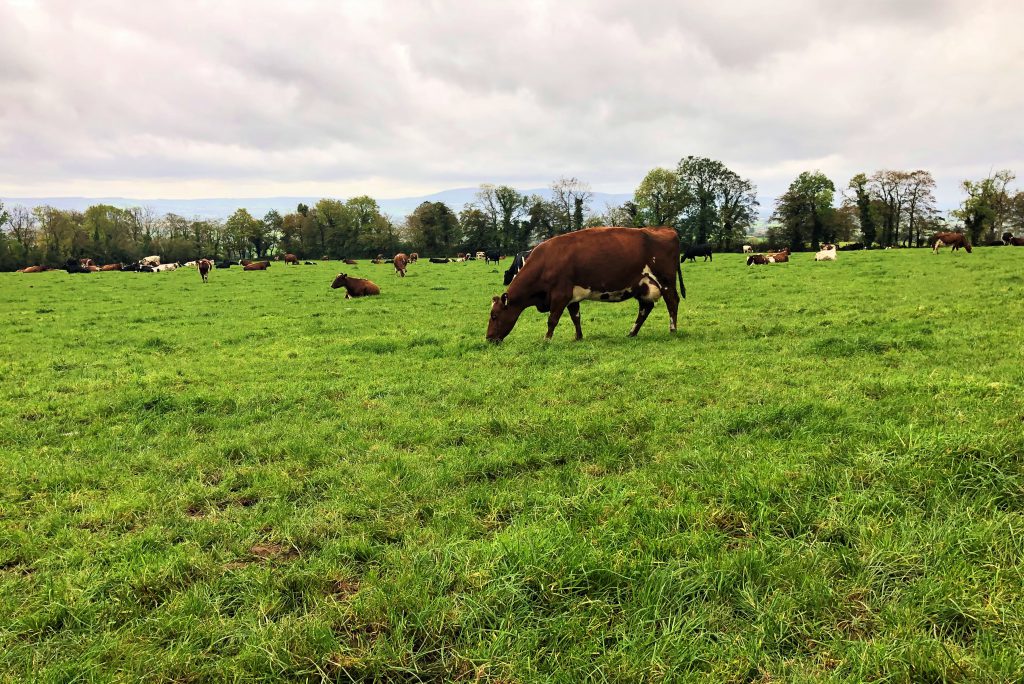 Touching on the reasoning behind the breed, he said: “The main reason was fertility, particularly conception rate to first service – it is higher in the Norwegian Reds.

Also for their good feet and legs because we have very long walks here; the furthest walk is 2.5km.

The milking platform consists of 140ha (336ac) of which half is owned and half is leased – with an outside leased block used for rearing young stock and cutting silage.

In terms of grass grown on the farm, Mike said: “We grew as much as we could this year to try and keep costs down. To date, we have grown 16t/ha for the year. 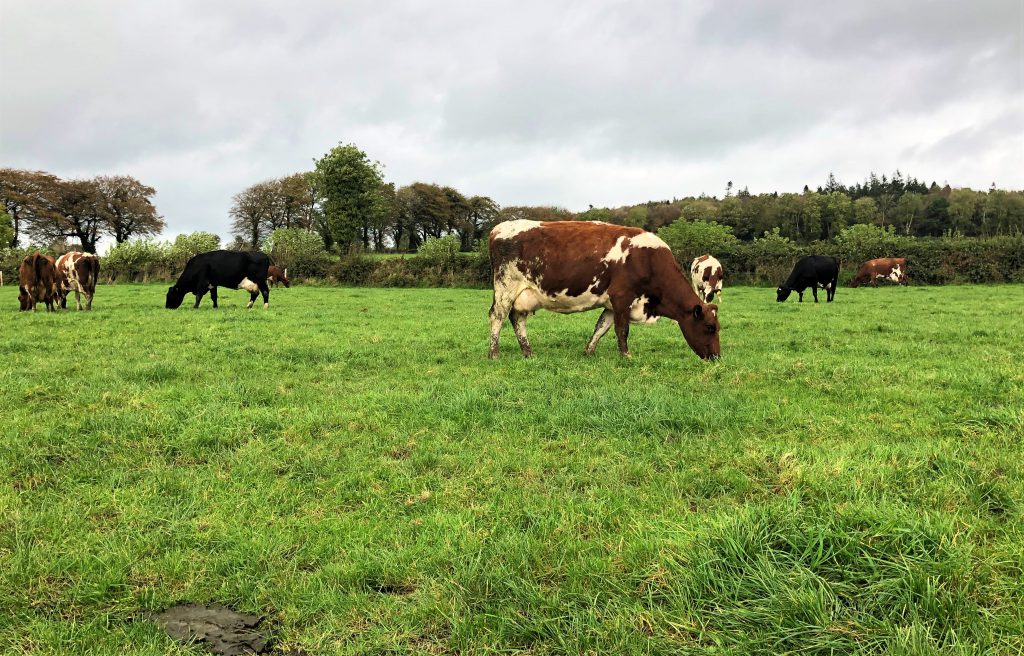 Mike explained that grass growth has dropped a lot in the last two weeks and how he expects to fully-house the cows next week.

“Once they go in they are in full time. They are walking between 2km and 2.5km at the minute and when you put them in they won’t walk. When they get a taste of silage and maize they don’t want to. We are crossing two roads as well which is awkward,” he explained.

In the coming drying-off period, the herd will be dried off in batches of 70 based on their calves’ dates – to ensure every cow gets a two-month dry period.

Answering the question ‘whether or not they are going to use selective dry cow therapy (SDCT)’, Mike said: “No, we haven’t really considered it; but we are milk recording. I suppose we will have to look at it at some stage because it is something that we are going to have to do in the future.”

In 2014, a new 60-unit DeLaval rotary parlour was installed on the farm. Previous to its installation, they had been milking through a 16-unit double-up DeLaval parlour. 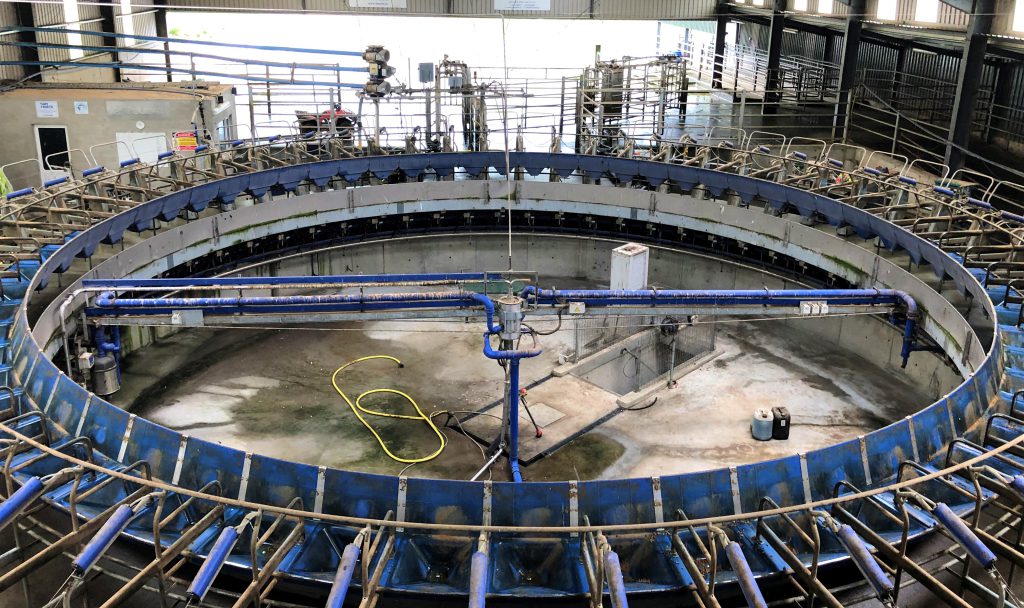 “We milk about 300 cows/hour; in the old parlour it used to take us about three hours to do the milking.

At the minute, because they have less milk, we can speed it up and milk the 370 cows in an hour.

Answering the question as to ‘why did they decided to go with DeLaval’, Mike said: “Our old parlour was DeLaval and we were always happy with the service. They have a good machine and we couldn’t fault any of the parts.” 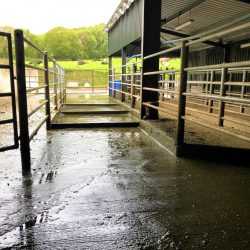 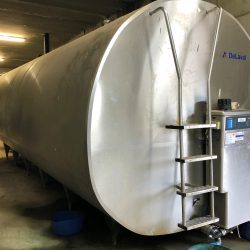 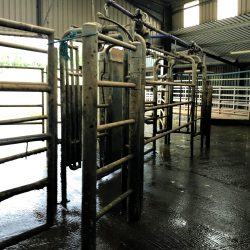 The parlour also has pre and post-drafting gates, a footbath, a hoof pairing crate and a 32,000L DeLaval milk tank.

“When we were designing the parlour we knew we wanted one man to be able to milk the cows by themselves, to save on labour. Now one person can do the whole milking including bringing them in, in about two hours,” Mike said.

For the first four weeks of the breeding season only Norwegian Red straws are used; then the Angus stock bulls are let out.

“We have still managed to grow the herd even though we only use dairy straws for four weeks. Before we only culled what wasn’t in calf; but now that we have stopped growing the herd, we might be able to do more voluntary culling,” explained Mike. 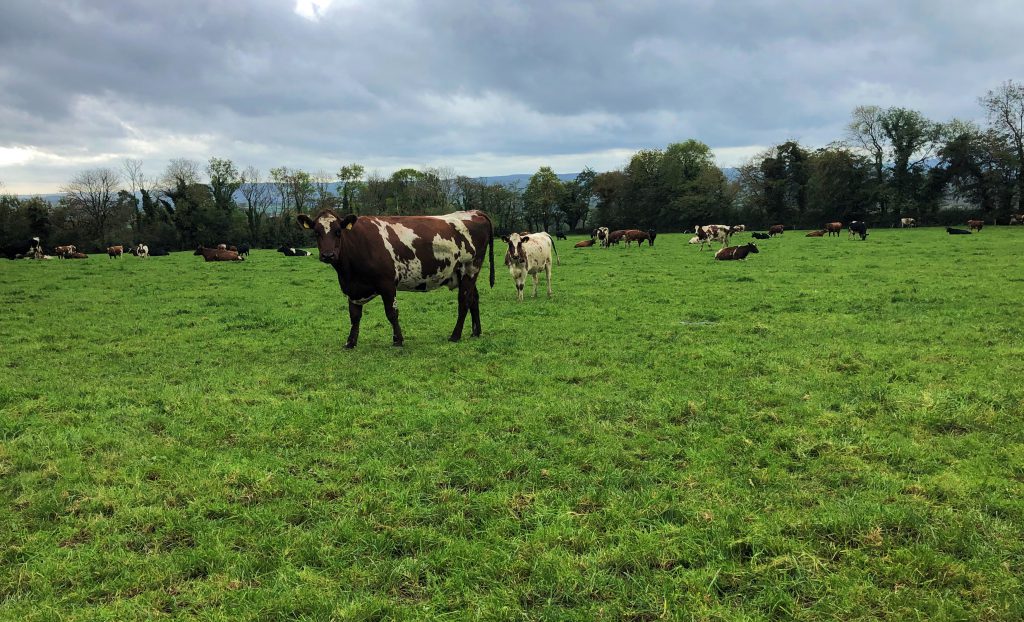 Touching on the breeding strategy for the herd, he said: “We had a 10-week breeding season this year with a 10% empty rate. We were hoping for a bit better but we fed less meal this year, so that may have had some of an effect.

“We start breeding on May 10 and start calving around February 15. We calve them a little bit later because we have such a compact calving pattern; so we want to make sure we have enough grass for them when they do go out. About 90% of the herd is calved in six-weeks.”

Answering the question: ‘What do you do with the bull calves?’ Mike said: “We sell all the bull calves and the Angus calves at two to three weeks-of-age.

“There is a good enough sale for the Norwegian Reds, but who knows what is going to happen this year. It could be more difficult.”

Over the winter the cows are all housed in straw bedded sheds – with a slated tank and feeding barrier to one side. There are no cubicles on the farm. 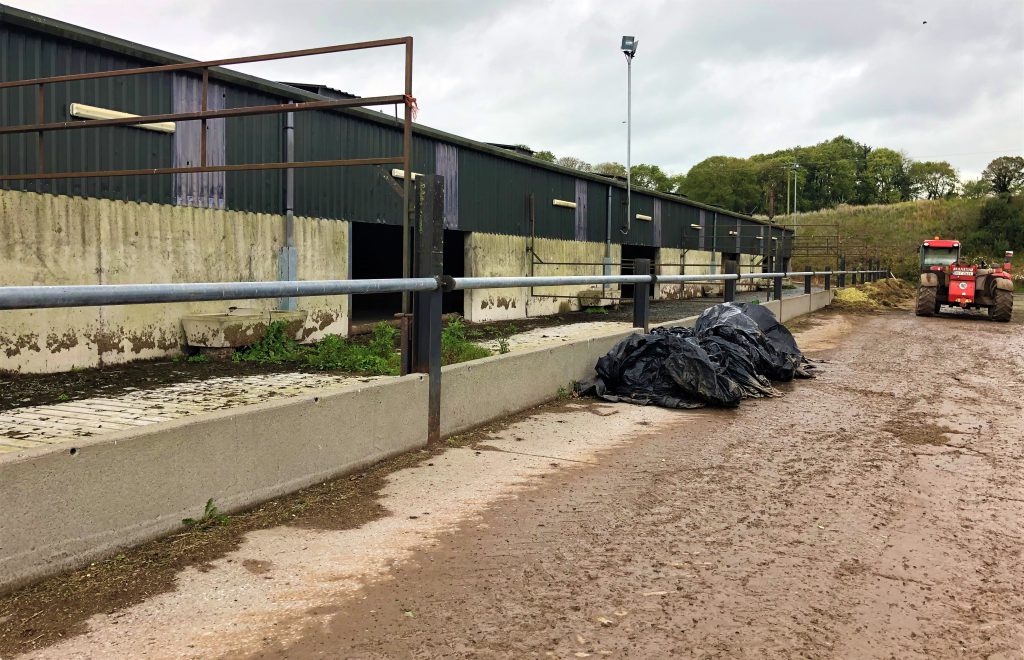 Explaining why they went for straw and not cubicles, Mike said: “Starting out it was the capital investment that put us off the cubicles. The cubicles in the shed we had got old and we had to replace them all. So, for a couple of years we said we’d split up the cost and have straw bedding and cubicles.

“But, we found then that the straw bedding worked. Also because the fertility is so good in the Norwegian Reds, they ware lasting an extra lactation; in turn, we have a lot of older cows and we find they do a lot better on straw over the winter. We feel the straw is better from a cow welfare perspective too.”

Mike also explained how the straw bedding avoids any of the cows getting injured, because they are not getting stuck in cubicles. 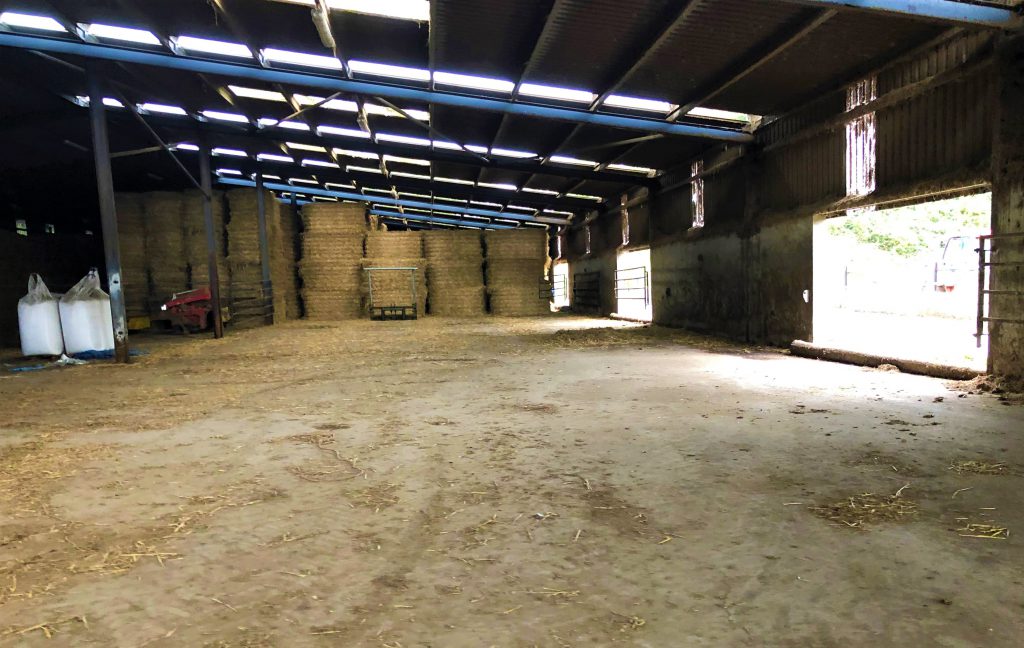 Continuing, he said: “In total, for the winter, we would go through about 2,500 bales – between about 12 and 14 bales a day – which we spread with a straw blower.

“Instead of bedding cubicles there is a man bedding the shed with a straw blower.

When we started out straw was relatively cheap, but now it is going up in price. The scarcity is also a problem. Last year we ended up bedding them with rushes.

“I have a friend in Co. Kerry and we bought 1,000 bales of rushes off him. They worked great; we actually went looking for more of them this year but couldn’t find any,” he joked.

Finally, we asked Mike what the future holds for the farm and whether or not they have any plans to expand further.

“I think we have reached our maximum now; we are kind of caught with the land base. If you start drawing in feed you’re in a different system and then you need different expertise – whereas the grass is simple.

“Michael has a son – he’s 17 – and when he comes along we might have to grow again; but for now I’d like to work on what we have and try to perfect it,” he concluded.

Dairy focus: Showing 'warts and all' of robotic milking in Co. Waterford