Finishing 1,500 head of cattle with a fully automated feeding system in Co. Cork

When we think of automated or robotic systems here in Ireland, we usually associate them with dairy farming, whether they be installed in milking parlours or slatted units.

However, a number of years ago, one beef-finishing unit in the south of the country turned to an automatic feeding system to facilitate the feeding of 1,500 steers and heifers annually.

The farm will host the beef tour at the Macra Annual Conference; the tour will take place today, Saturday, October 26.

Before we get into the nuts and bolts of the system, here’s a little background on the farm.

Glen South Farm, located on the outskirts of Banteer, Co. Cork, was established in 2012/2013, when Frank Murphy – and his wife Teresa – decided to turn Teresa’s family farm into a large-scale finishing unit.

The entire farm stretches across 400ac – consisting of both grassland and tillage – and is managed by Kerry native Áine Sweeney. 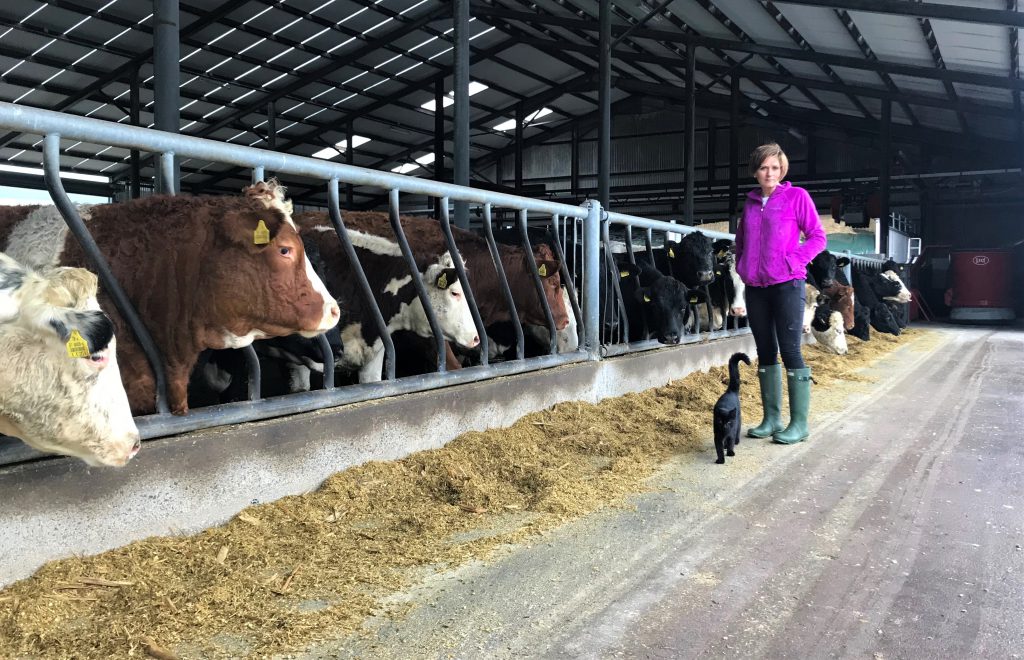 “This unit works because it’s simple; it’s a one man/woman operation, but I take on summer staff every year,” Áine explained, as she walked through the finishing house.

Both heifers and steers are finished over a 70-day period. The 12-bay, main housing facility – which was constructed to suit the Lely robot – consists of 10 pens; each pen has a capacity of 28 heifers and 24 bullocks and are equipped with rubber mats.

Animals are purchased from local marts or direct off farms. No one breed is preferred, but being located in a dairy-dominated region, the majority of cattle are dairy-cross animals – Hereford and Aberdeen Angus – with the odd speckle of continental colour noticeable throughout the impressive unit. 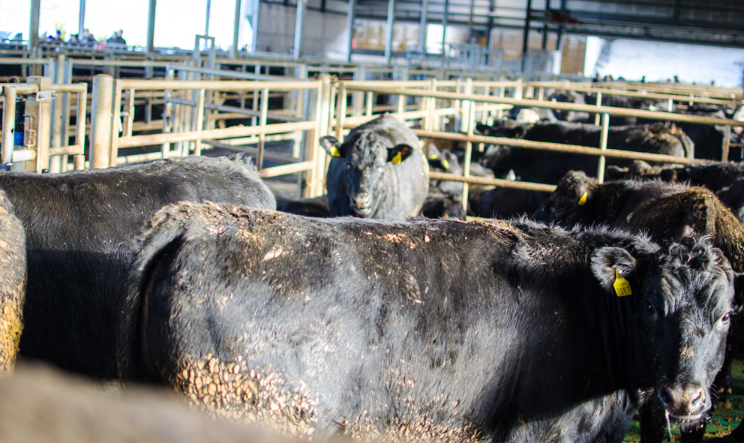 Once animals arrive on the farm, they are housed in an isolation unit for three days; they are vaccinated against pneumonia, IBR, blackleg and receive a pour-on treatment against parasites, before being turned out to grass or into the finishing shed.

Ventilation is adequate in the unit and roller doors (with vents) can be closed in adverse weather conditions.

Given the size of the finishing shed and the nature of the operation, cattle can be sourced from up to 50 different farms, so a strict health plan is adhered to.

This plan goes hand-in-hand with a centrally located handling unit in the main shed and an isolated ‘hospital’ shed located a short distance from the main unit. 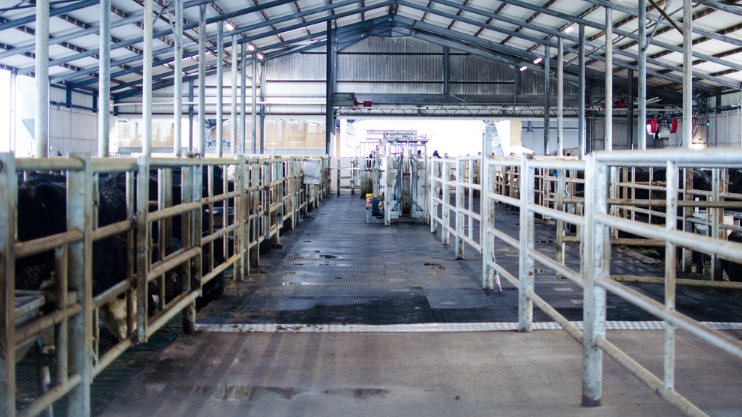 Áine noted that the incidence of lameness, cattle suffering from acidosis or scours is quite low on the farm, and in cases where an animal is found to be sick, immediate action is taken to resolve the issue.

Bio-security is also excellent on the farm. In the ‘hospital’ shed, the Lely Vector feeds away from the feed face, so no disease can be spread – via the robot – to the main shed.

Pen walls are also extended so animals can’t touch in the hospital pens; a handling unit is also located here. 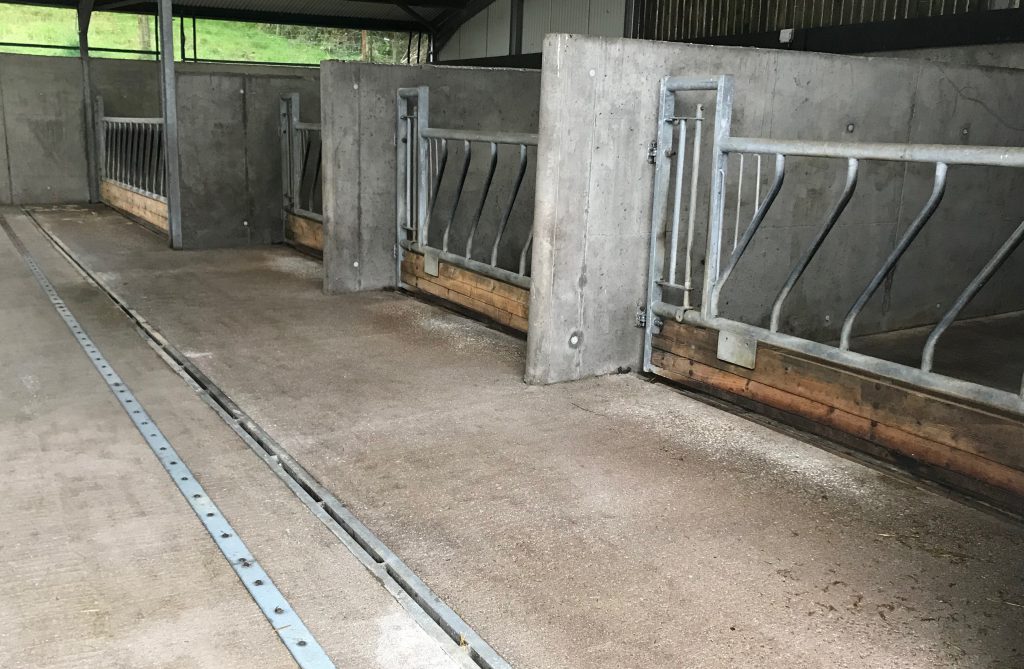 Heifers enter the finishing shed weighing approximately 450kg, while the bullocks are housed weighing 500kg plus and are fed the same diet from start to finish.

“We don’t push cattle here,” Áine said. “The cattle are fed on demand.”

The Lely robot follows four routes on the farm, and concrete yards are critical for the machine to be fully utilised as it is mounted on three wheels and uses ultrasonic sensors to track its route.

The feed – which is cut from the pits with a specialised ‘block cutter’ – is stored in the feed kitchen, an open area without any obstacles, in which grass silage, maize silage and wholecrop silage are stored.

A grab – equipped with weight cells and a capacity of up to 50kg – moves over the feed kitchen to select the feed and loads it in onto the mixing and feeding robot; ration is also added to the mix here. While during and after filling, the robot mixes the contents before distributing it out to the animals in the shed.

The tub feeder has a capacity of up to 1t, but only 600kg is loaded to save wear and tear on the robot itself.

Silage pits are tested quarterly and any adjustments are made to ration feeding rate depending on the results of this analysis.

The robot also knows how much feed there is in front of the animals at all times and it determines when and where feed is required, without any intervention from Áine.

“The Lely Vector does three jobs when it goes out. Number one, it uses a laser light that measures the amount of feed already there.

“Number two, it’s always pushing in the feed when they nose it out. If it was going to feed pens four and five, for example, it would follow the same route pushing in feed as it goes along. Even shy cattle will still get the same consistent feed and thrive; there’s no bullying at the feed face,” she said. 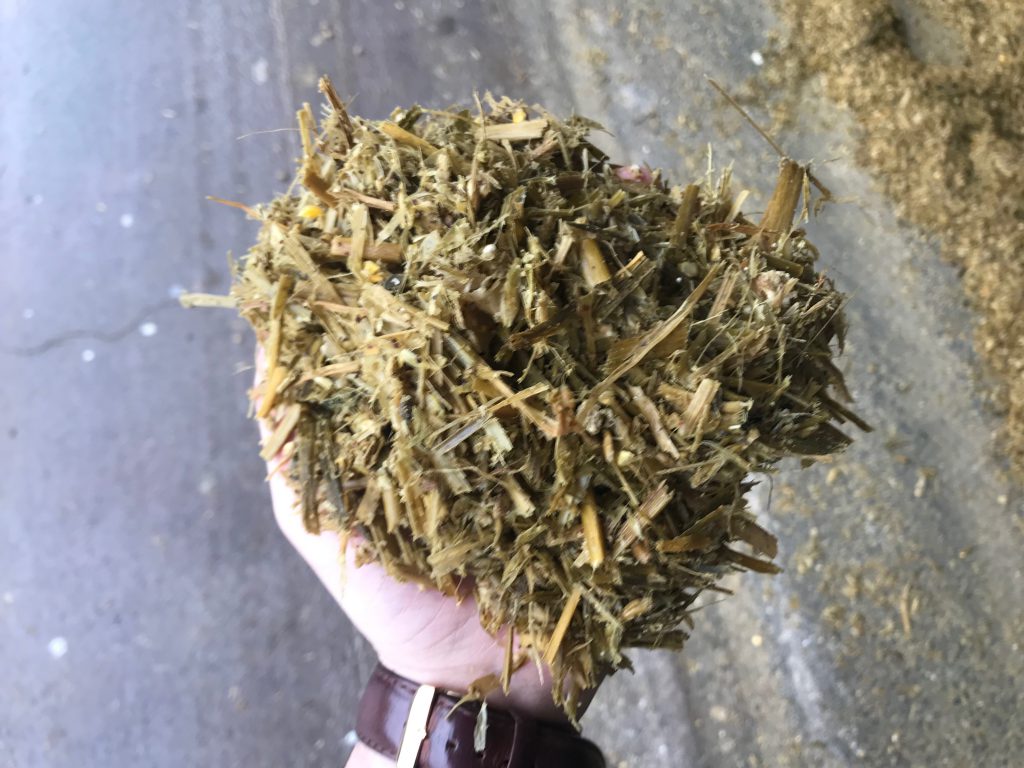 The Lely robot will be active for 24 hours/day, seven days/week and makes its way around the unit every 58 minutes.

“From the value we are getting from it, I would find it very hard to change,” Áine highlighted.

All machinery work on the farm is carried out by local contractors – silage (150ac), maize (70ac), wholecrop (70ac) and slurry; it is spread via an umbilical slurry system in the springtime. 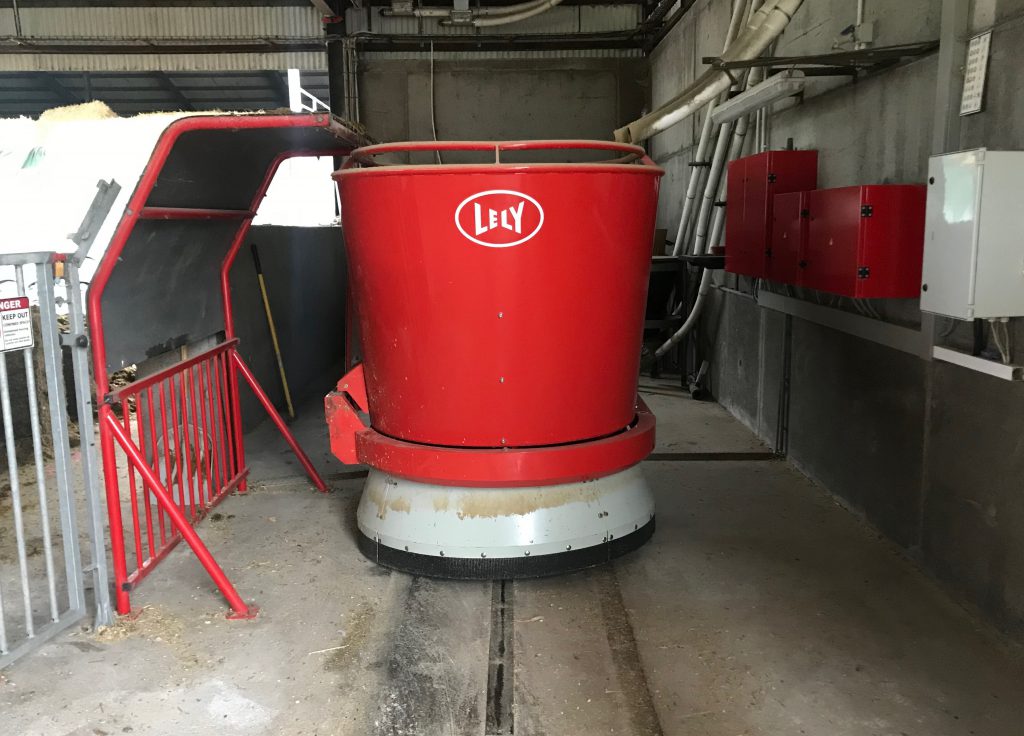 While a finishing ration/mix is the main feed fed on the farm, grazed grass also plays its role throughout the grazing season. This year, the home farm was mapped and paddocked with temporary fences and grass measuring commenced.

“If grass is not measured, it’s not managed; I find the management is so much easier and I now see that it’s the most important thing to go out and walk the paddocks every week.”

Heifers and steers are grazed in a large group with a target ADG of 1kg/day from grass.

Commenting on the current beef situation in Ireland, Áine said: “Beef farmers are going through a rough period. Once Brexit is over and sorted, we will be able to see how the beef thing is going, but it’s going to be a rough couple of months.”