It’s from the Hanrahan family’s involvement in the pig industry – namely the production of pigs from birth to slaughter – that a focus on maximising efficiency was derived.

Over recent years, the Limerick family – comprising of three generations – has adopted key efficiency principles from the porcine business and applied them to the dairy enterprise.

AgriLand recently visited the operation to find out more and to see why they’ve placed a major focus on technology over recent years. 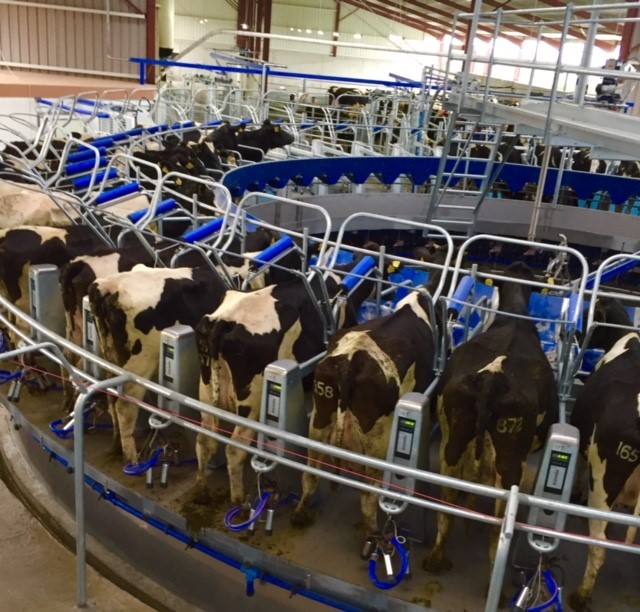 “There’s a lot to be taken from pig farming in terms of scales of efficiency, knowing your costs of production and utilising technology to make the job easier.”

The herd and production

Although the meal input is relatively high, John said: “I am not afraid to feed meal. The basis of the business is producing as much milk solids as possible and that comes down to the return on investment on feed inputs.

“That’s really something we have taken from the pig side of the business. If you look at the cost of meal and the value of milk solids, it’s paying us to feed the level of meal we are feeding due to the resulting milk solids production. 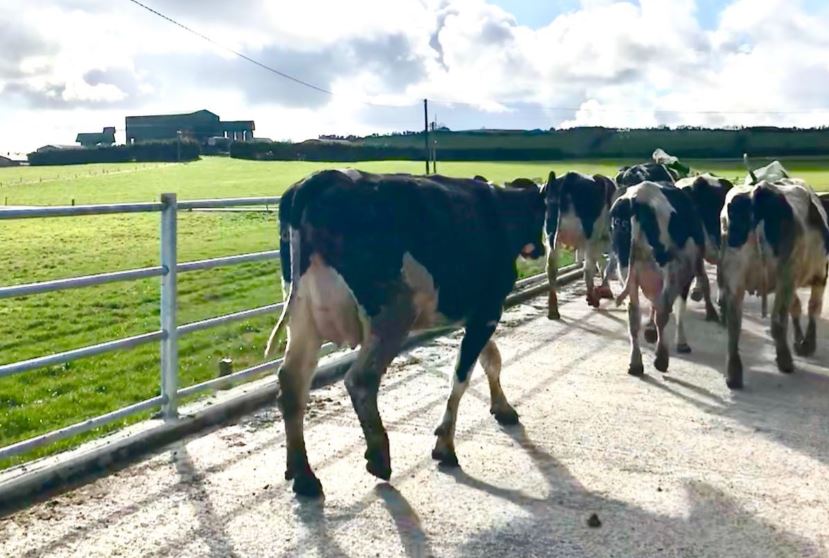 “You have to know your costs and, from that, you can calculate your costs of production. At certain times in the year, by feeding extra concentrates, it can leave a return on investment of a minimum of 2:1.”

Grass also has an important role to play within the business and the milking platform features an extensive series of high-quality roadways, numerous access points and water troughs.

However, this spring has proved to be particularly challenging to get cows out to grass and the number of grazing days has been lower than desired.

At the time of the visit, John was preparing to synchronise a batch of maiden heifers. The farm aims to commence calving in early January.

The Hanrahan family milk a herd of Holstein Friesian cows. However, a few crossbred cows are scattered throughout the fold.

Touching on the breeding policy, John said: “We’re trying to breed a functional cow that’s capable of producing high volumes of milk solids and that will stay within the system.

“We’re always open to change and we tried a couple of crossbred heifers last year. However, where the Holstein Friesians were yielding well into the back end of the year, we found that the crossbreds just eased off when it came to September.

“The Holstein Friesians tend to have a flatter lactation curve compared to the the crossbred animals and that tends to suit our system.

“We aim to produce high volumes over the duration of the lactation and the crossbreds don’t seem to be capable of doing that from what we seen last year. The value of the milk cheque in October and November has to come into the equation as well.”

John’s daughter Shauna touched on one of the latest investments made on the farm; a 50-point, DeLaval rotary parlour was installed on the farm in 2017.

The parlour is capable of milking 280 cows per hour currently and 300 cows per hour during the fall of the year. It really has taken the work out of milking and it provides us with so much information on each individual cow.

After installation was completed, all of the cows in the herd were tagged with HDX (electronic identification) tags and each cow’s number was inputted into a computer within the parlour. 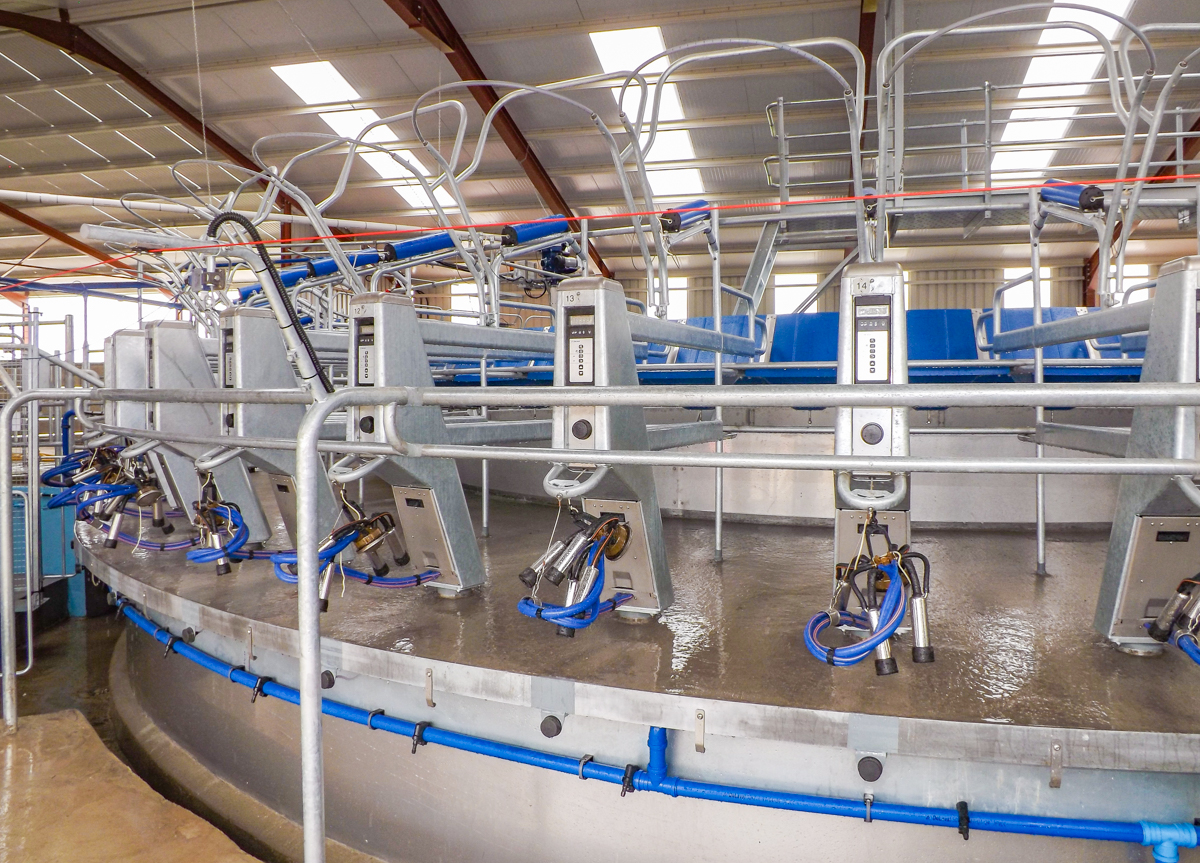 Through the use of a drafting gate, the Hanrahans are able to draft out cows prior to milking. This proves very beneficial in terms of managing freshly-calved cows and those with cell count issues.

Apart from milking the cows, Shauna added that the parlour is equipped with a host of additional features, including: yield monitoring; feed-to-yield; automatic cluster removers; and a warning system.

“Once a problem has been identified – such as a cow kicking a cluster off – the milker is informed via the audio system to reattach the cluster and a retention bar is lowered to prevent the cow from exiting the parlour before she’s fully milked.

“Based on the inputted calving date, it also tells you if a cow has passed through the drafting gate and enters the rotary earlier than she should have for milking.

“The yield monitoring is also beneficial, as it informs you if a cow is producing lower-than-expected milk yields; it’s a great early warning for a cow bulling or a cow with the early stages of mastitis,” she added. 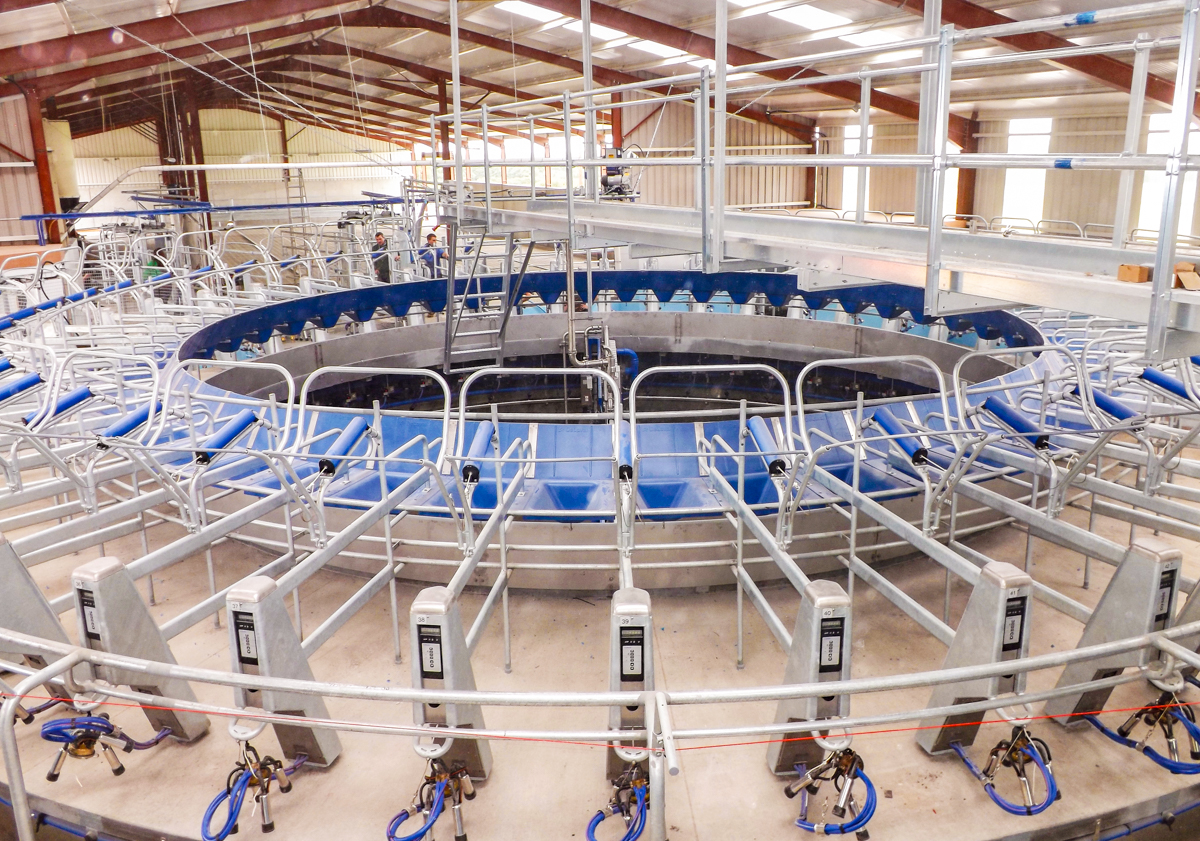 On getting used to the new parlour, John explained: “The choice of milking parlour was a business-critical decision; but – along each step of the way – DeLaval project managers and support staff are there to assist 24/7 with the training and on how to get the best use of the parlour.

“Experienced DeLaval service technicians follow up to service the installation so that the parlour will carry on providing fast, efficient milking that protects milk quality and cow health.

The parlour has been a great investment and one person could comfortably milk 360 cows on their own.

“Shauna is studying Agriculture with Animal Science at Aberystwyth University in Wales and she’s able to dip in and out of the system whenever there’s a problem or just to check on how the herd is performing. She can be miles away and she can tell us there’s a problem with a cow before we even spot it,” he joked.

Along with the parlour, the Hanrahans have also installed a DeLaval Teat Spray Robot (TSR) – the first of its kind to be installed in Ireland or the UK.

The DeLaval TSR is a fully-automatic teat spray applicator for dairy farmers with rotary milking parlours; it can be installed in new or existing rotary parlours. 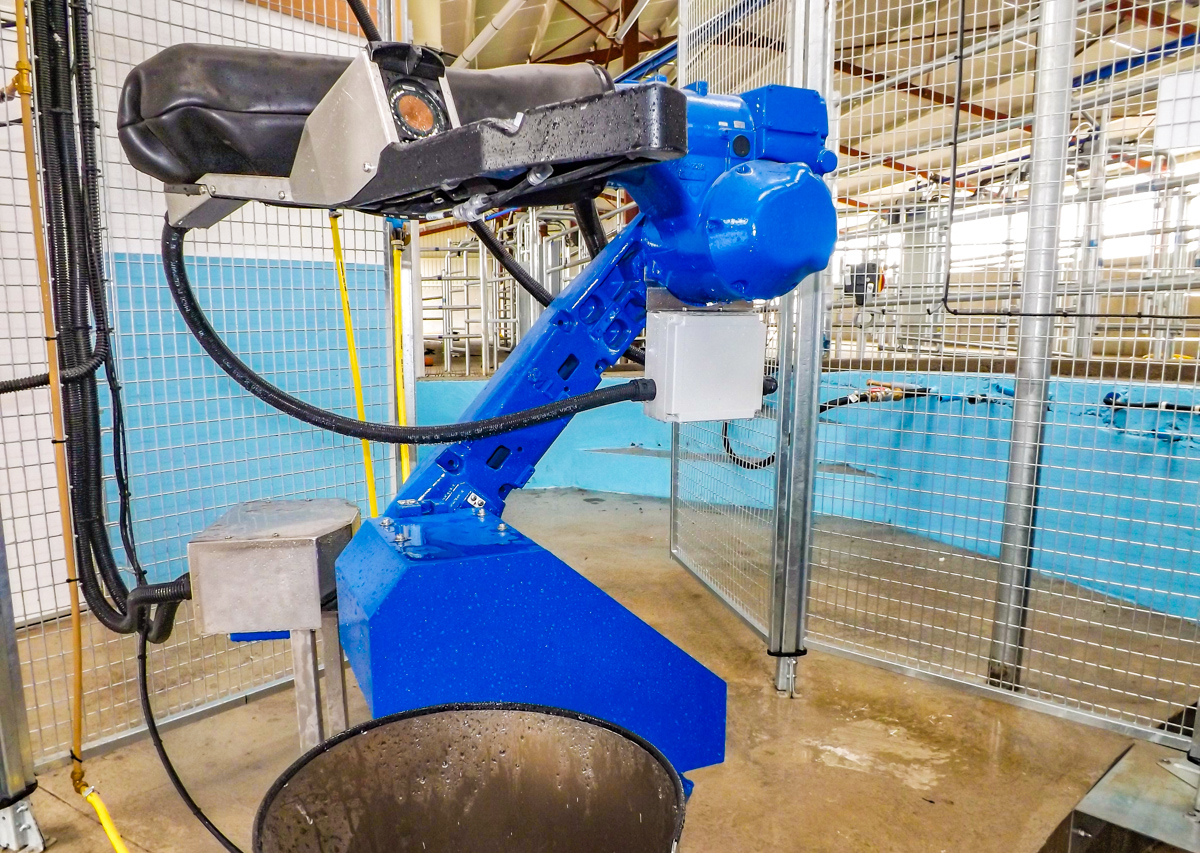 Discussing where he first seen the technology, John said: “I am a regular visitor to EuroTier in Germany – the world’s leading trade fair for animal production – where innovations are presented, trends set and visions discussed. It was there I first seen the robot.”

After discussing the prospect of bringing the TSR to Ireland with DeLaval, the Hanrahans installed the TSR earlier this spring. 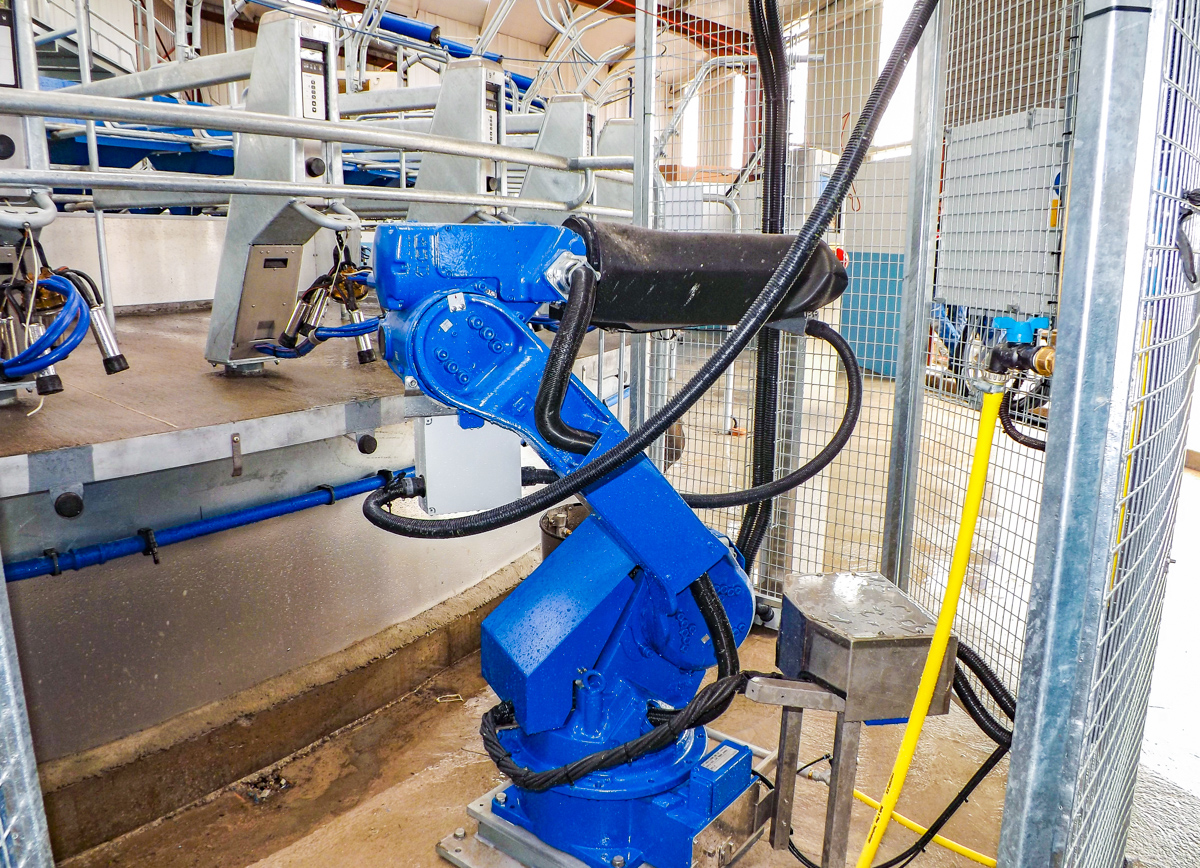 John is extremely happy with the performance of the piece of kit, adding: “It’s incredibly accurate due to its 3D camera and it is as good as having a man standing there post-spraying the cows.

“It grants huge savings in labour costs and the return on investment is exceptional. We have the TSR programmed to apply 10ml of spray and it never misses a teat or a cow; it’s truly exceptional.

“The whole operation is really simple; I wouldn’t change and I wouldn’t go back,” he concluded. 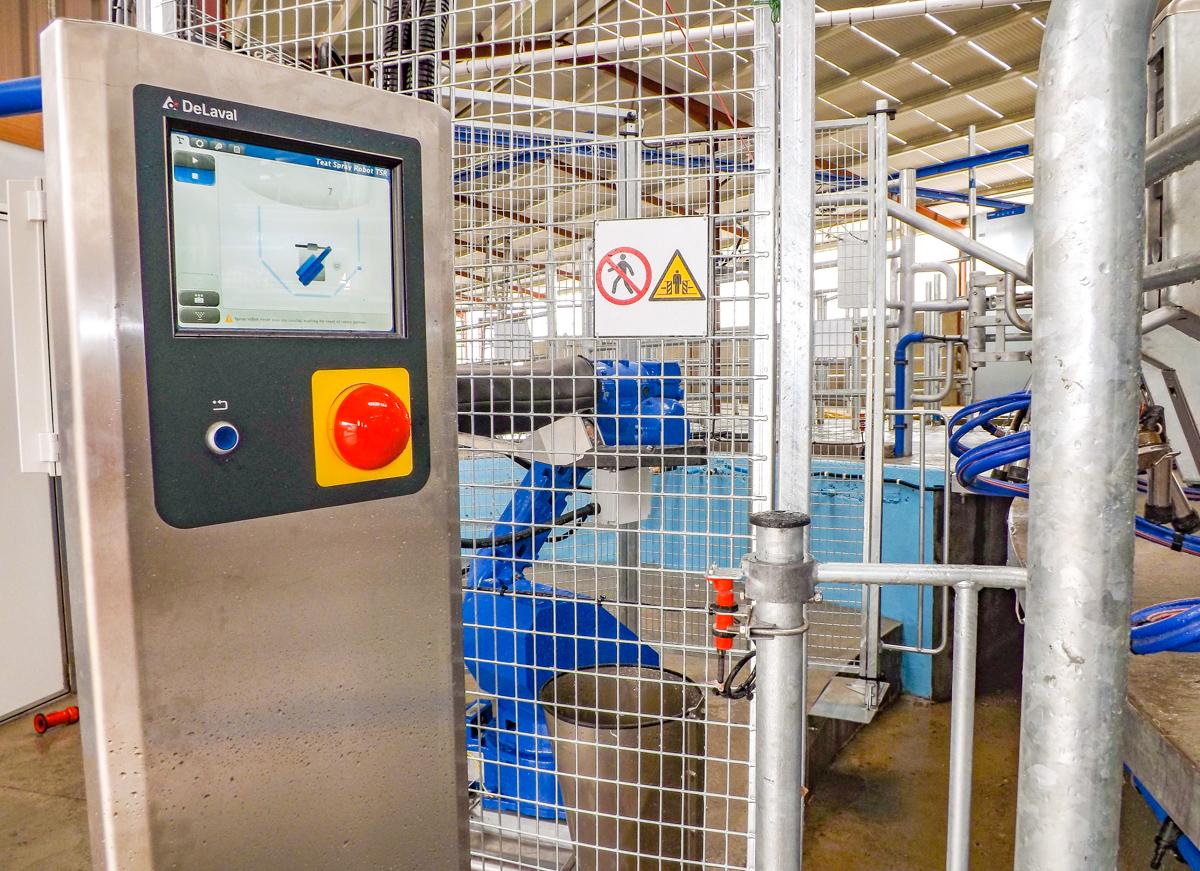 Dairy focus: What's been achieved in 14 years at Ballyhaise?