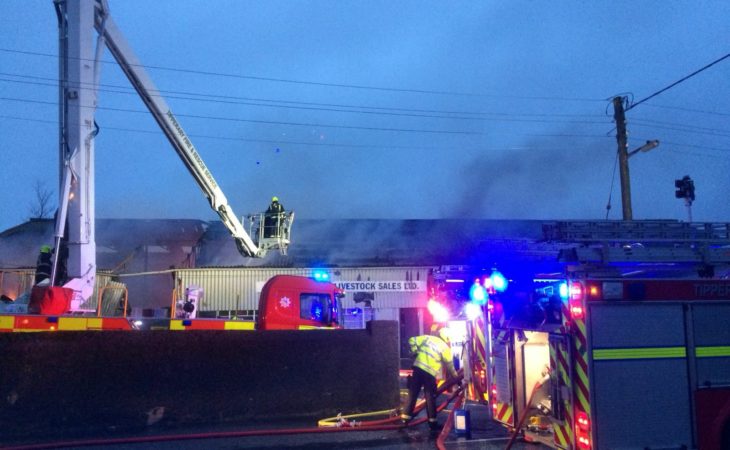 Fire fighters are currently battling a “large blaze” that broke out at Carrick-on-Suir Livestock Mart in Co. Tipperary late this evening.

Units from Carrick-on-Suir and Clonmel are tackling flames with a number of appliances, including hydraulic platforms.

Gardai are advising motorists to avoid the area if possible.

It is understood that the fire broke out a number of hours ago and that the flames quickly engulfed the roof of the building.

Separately, it was confirmed earlier today that Aurivo’s marts in Ballymote (Co. Sligo), as well as Balla and Ballinrobe (Co. Mayo), will reopen this week.

Last week, Aurivo – the operator of all four marts – decided to close following an incident which occurred in Mohill Mart on Saturday, April 7, where a man was injured by a bull.

The man had to be airlifted from the site and taken to Sligo University Hospital; no further update regarding his condition has been made available as yet.

The decision taken by management was described as “a prudent one” by a spokesperson for the co-operative.

“The health and safety of our customers, suppliers, members and employees is of paramount importance,” the spokesperson said when announcing the temporary closures.

It has been announced today that new health and safety procedures will be operational in the marts.