Last week, hundreds of farmers flocked to Co. Cavan to see what has been achieved over the past 14 years.

Discussing the project, Oliver Tierney – the assistant principal at Ballyhaise Collage – said: “I have been in the college since the research started back in 2005.

“The idea at the time was to bring the Moorepark Research Programme up to Ballyhaise to see how it would work in the Cavan/Monaghan/Leitrim/Monaghan area.”

He added that a number of questions were raised when the project began. These included:

Although the performance of the previous herd looked good on first inspection, Oliver added that it fell down significantly “once you scratched the surface”.

“Back in 2004, there was a fairly conventional dairy herd here with reasonably good milk yield (483kg/cow of solids). It was a well-run system and the cows were performing well on the surface of it.

“However, our stocking rate wasn’t brilliant and we were only achieving 960kg/ha of milk solids. When the performance indicators were applied from a breeding point of view, deficiencies in terms of fertility were found within the herd. 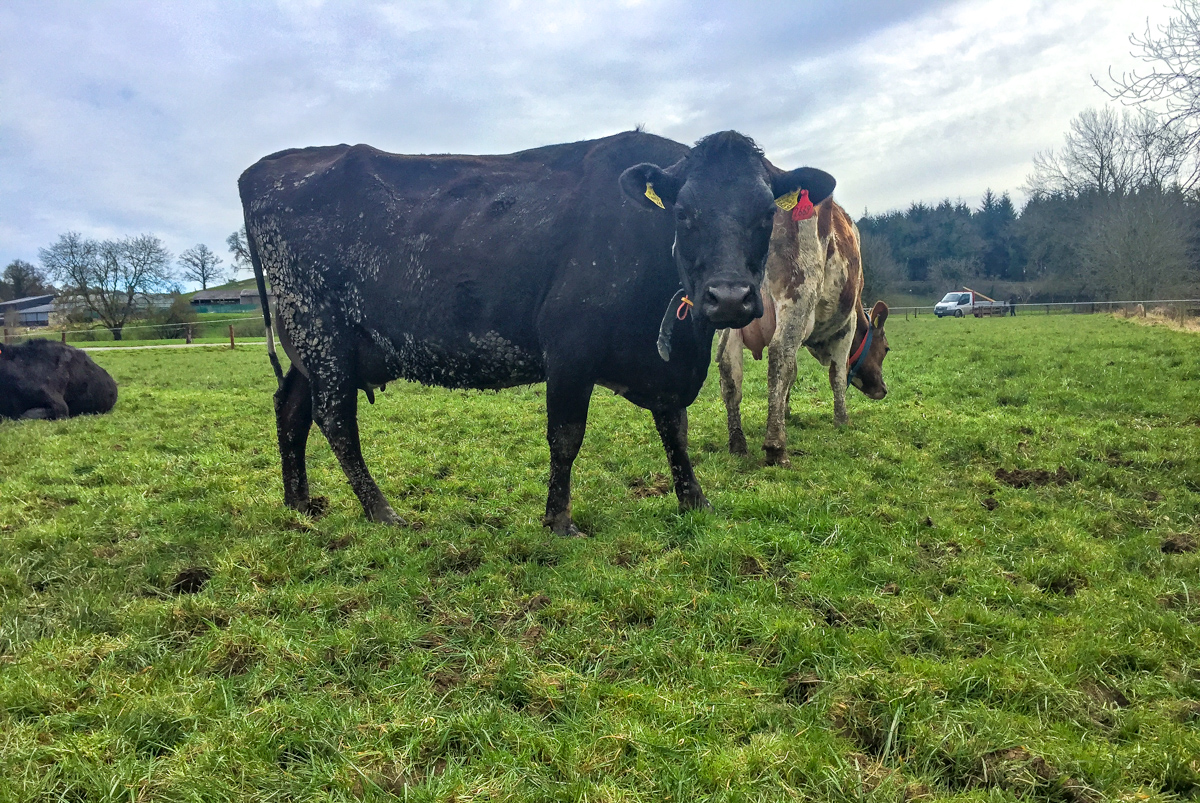 “We were achieving an empty rate of 36% at the end of a 12-week breeding season, which was very high. And, based on modern key performance indicators, that wasn’t satisfactory. There was major work done over the intervening period in terms of addressing the issue of empty rate,” he said.

Other areas that were focused included: reducing the dependence on imported (bought-in) feedstuffs; matching stocking rate to grass growth; improving the quantity of milk solids sold per hectare; and maximising the profitability per hectare.

Prior to the project commencing in 2004, the farm had been growing 10.5t/ha/year. However, this has increased significantly in recent years; over the last seven years, the farm has grown 13.7t/ha/year on average.

However, Oliver explained: “There’s considerable volatility in terms of grass production from year-to-year. In wet years like 2012, we only achieved little over 12t/ha and 13t/ha in 2016. In really good years like 2014, we were able to grow 15.5t/ha.

When it comes to the ideal stocking rate, he said: “We’re finding that the figure is somewhere around 2.75 cows per hectare for this farm.” 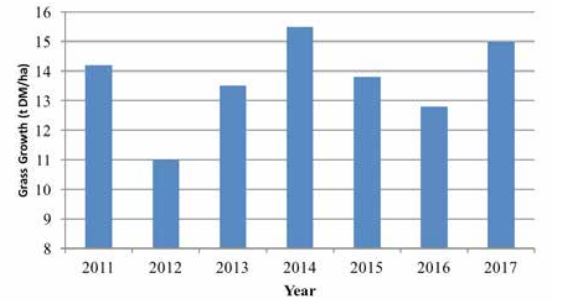 A number of factors had a role to play when it came to increasing the quantity of grass grown on the 40ha block. Investments in reseeding, grazing infrastructure and soil fertility have all helped to achieve high levels of grass production and utilisation (80%). 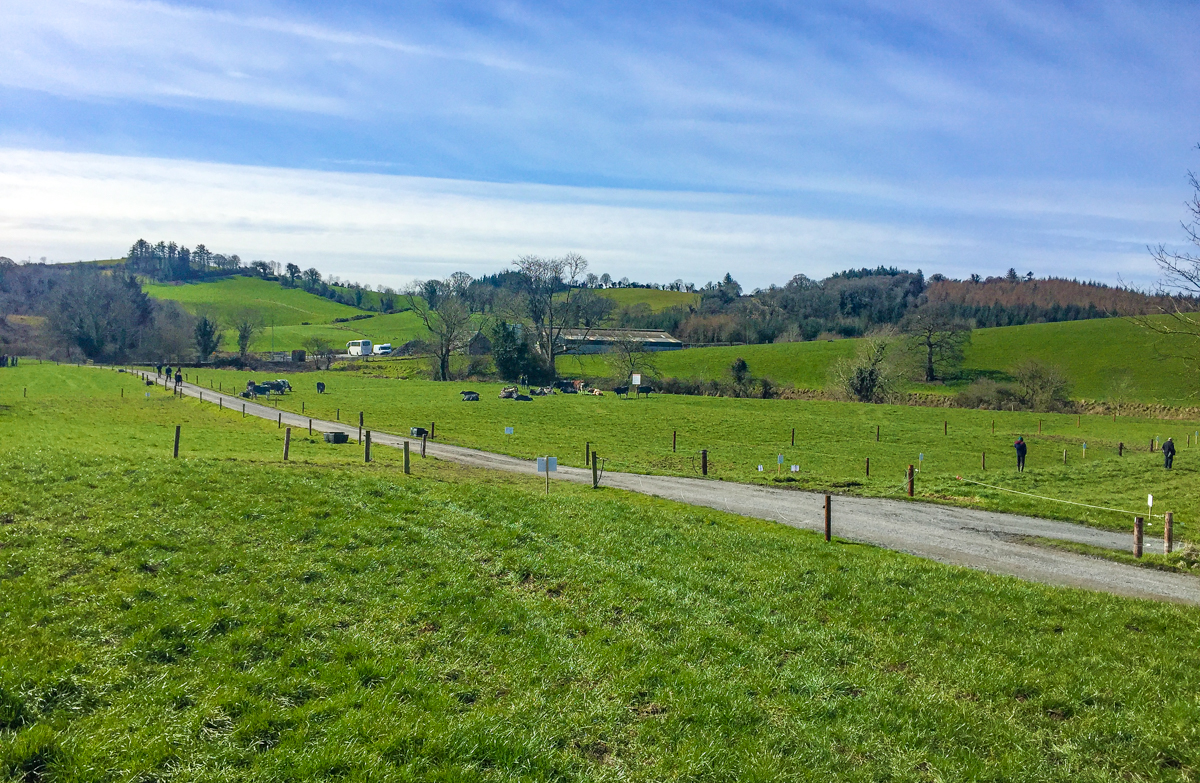 In the early years, an intensive reseeding programme was undertaken to improve grass quality and production potential. Since 2012, reseeding has returned to more normal levels with 10-15% being reseeded annually.

In addition to reseeding, annual soil testing of every paddock on the farm is standard practice and deficiencies are rectified as quickly as possible.

Soil phosphorous (P) and potassium (K) levels were high due to previous farming practices; but soil pH was low and this resulted in under-performing swards. 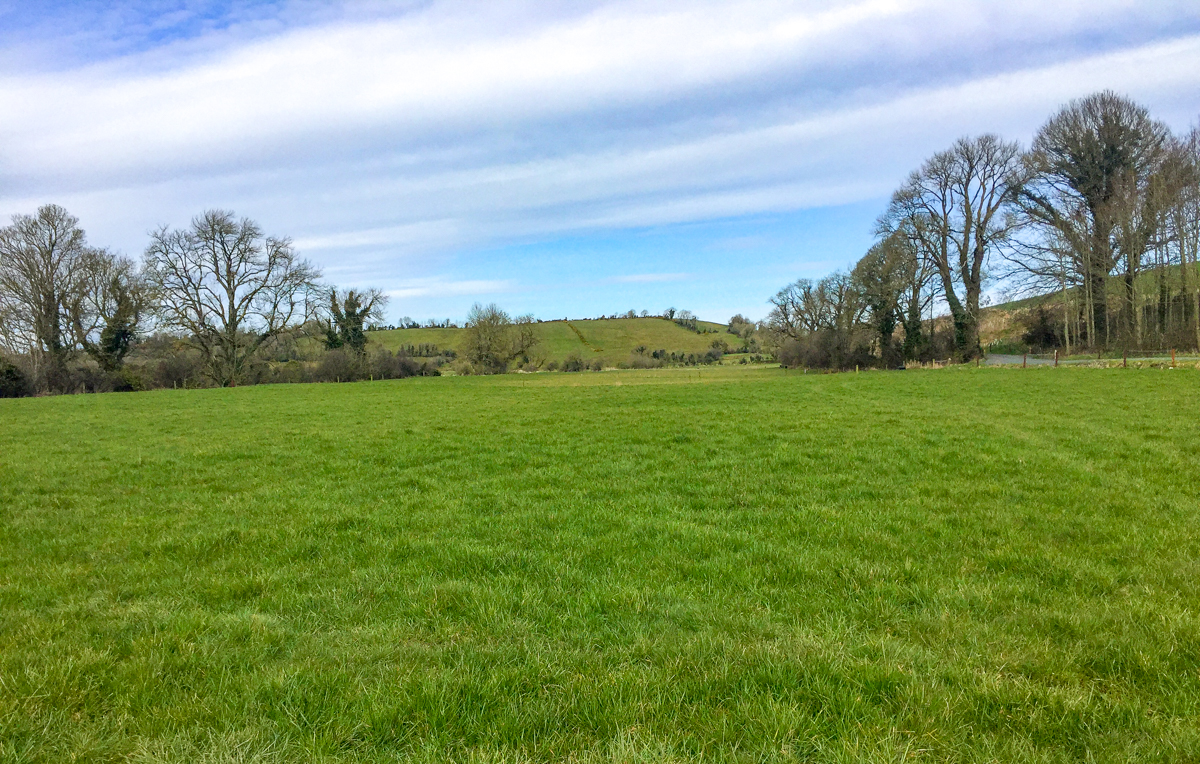 An intensive liming programme was undertaken between 2012 and 2015 to rectify this problem. This has resulted in 90% of the area being above a pH of 6.

In terms of P, 90% of the farm is index 3 and 4. Although the K status had been high in the past, K deficiencies have been identified over the past two years, with 50% of the area being below index 3 for K in 2017. 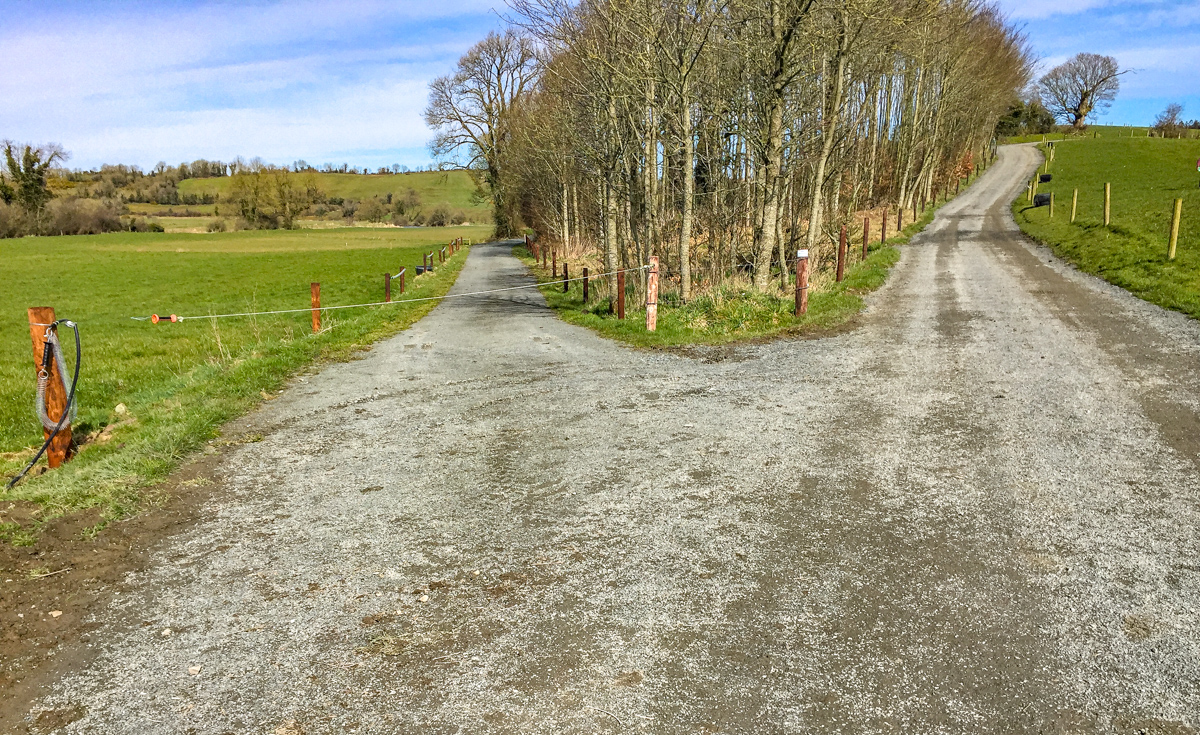 As mentioned above, 36% of the previous herd were empty after a 12-week breeding period in 2004. However, significant improvements have been made in the intervening period.

Oliver said: “We’ve gone from having a 36% empty rate down to a very acceptable level of 10% at the moment. That was done by initially having a very aggressive culling policy; cows that didn’t go in calf within the 12 weeks were culled and were replaced with high-EBI (Economic Breeding Index) stock.” 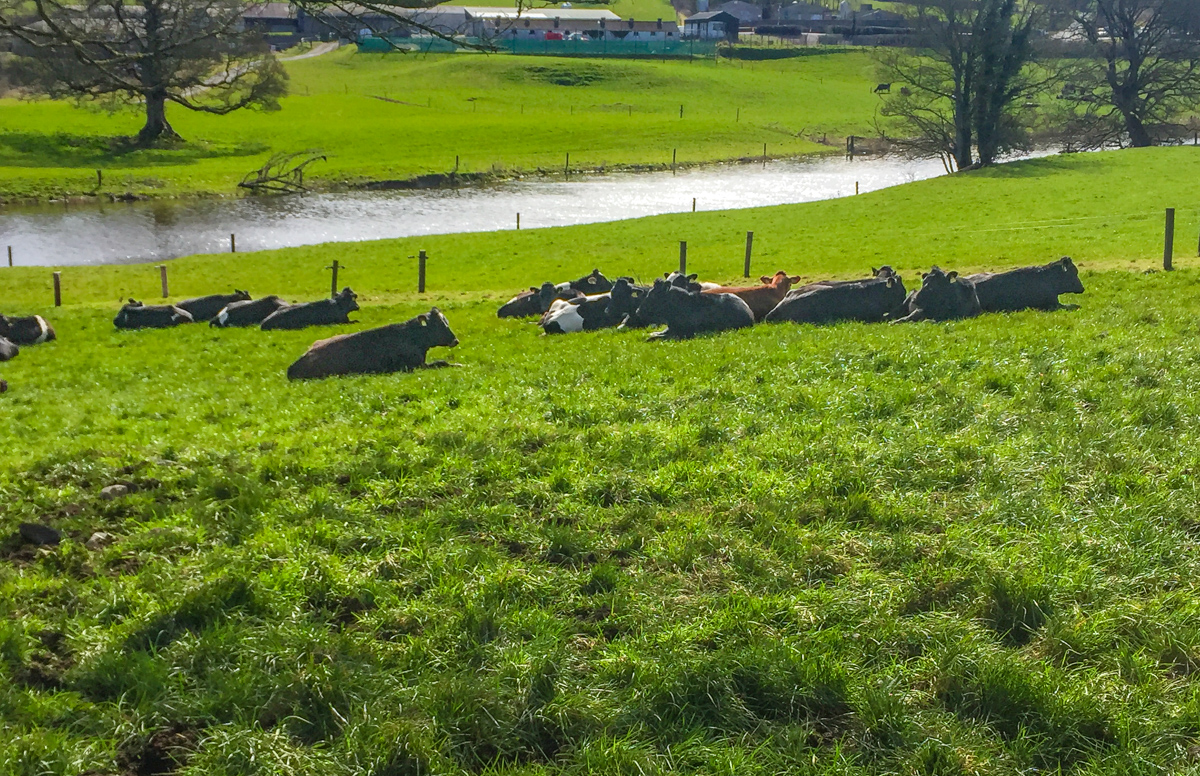 He continued: “We’ve been working on a very aggressive breeding policy of selecting for fertility and solids. Fertility is now in pretty good shape. 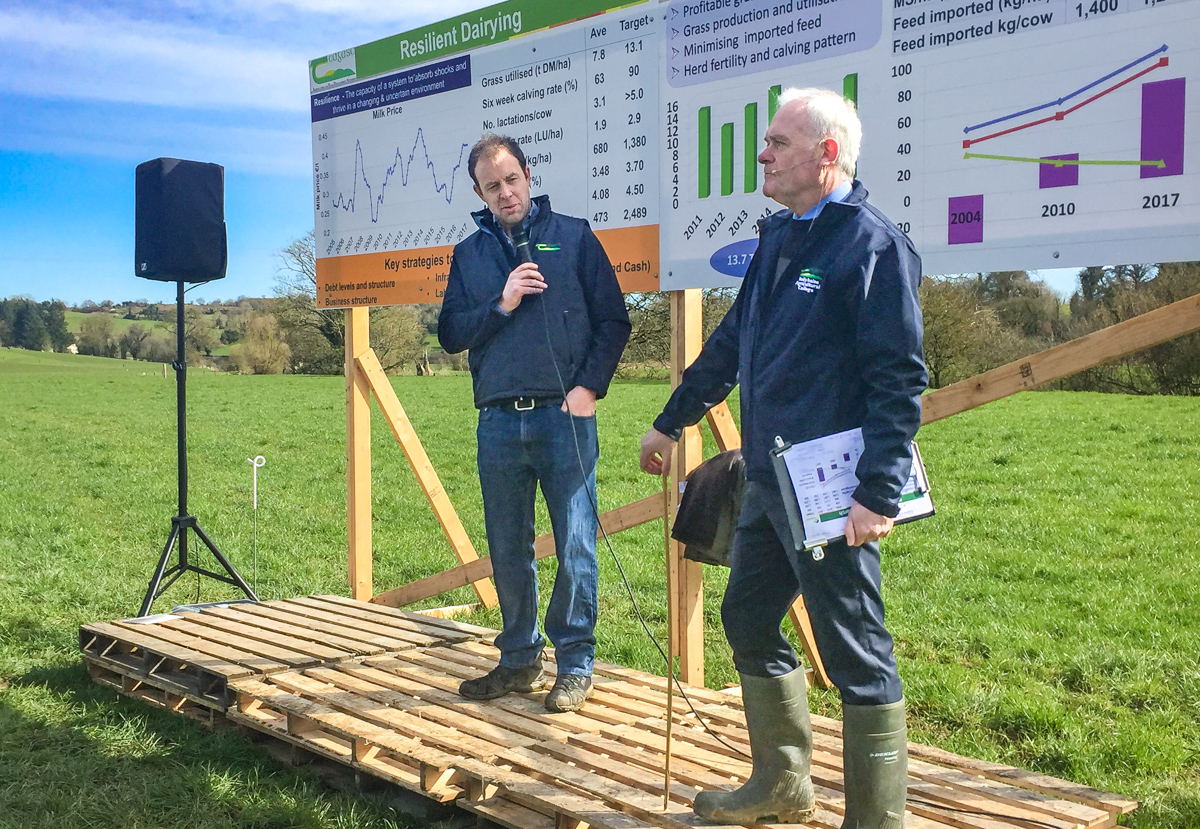 Expanding on how this improvement was achieved, Teagasc’s Donal Patton said: “There was a big debate around empty rates at the time, as a third of the herd went out the door.

“Basically, for the first three years, we were buying in heifers. For the next three or four years, we were keeping everything around the place. And, for the last number of years, we’ve been selling surplus stock.

“We solved the problem by buying in high-EBI replacement stock for three-to-four years and after that, we were self sufficient.

“Fertility gets easier every year. There’s 90% of the cows calved now and they’ve got four-to-five weeks before we start breeding again; everything gets easier and it goes in a circle.” 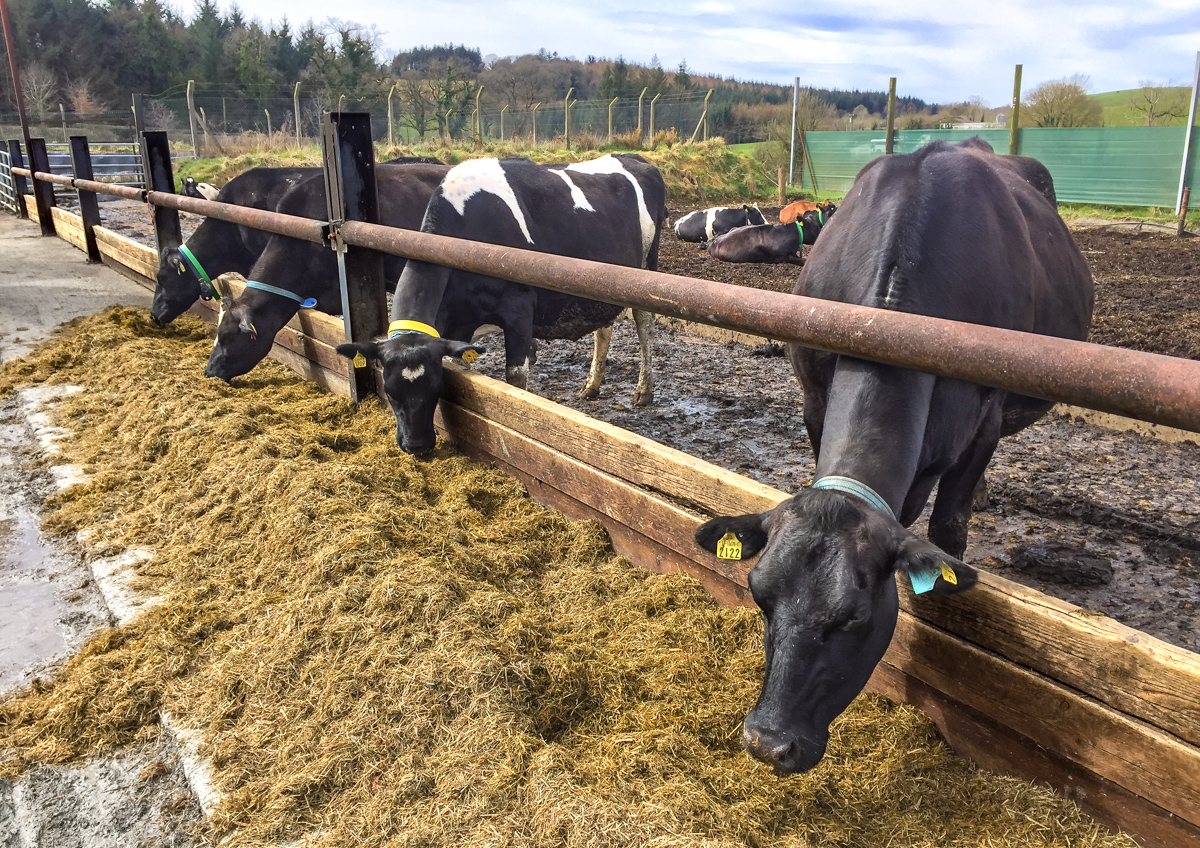 This increase largely comes from the increased stocking rate on the farm. However, it must be noted that these kilograms have also been produced on a lower volume of imported feed and this has had a positive impact on the profit generated.

Oliver explained: “One of the key factors in terms of ensuring profitability is to make sure that we reduce the amount of outside feed being fed. That includes concentrates, maize and silage – anything that’s not produced within the 40ha block.

“We’ve achieved considerable reductions in those. We are getting to a stage where we are going to achieve quite a profitable system based on 450kg/cow of milk solids and a meal input of 500kg/cow.” 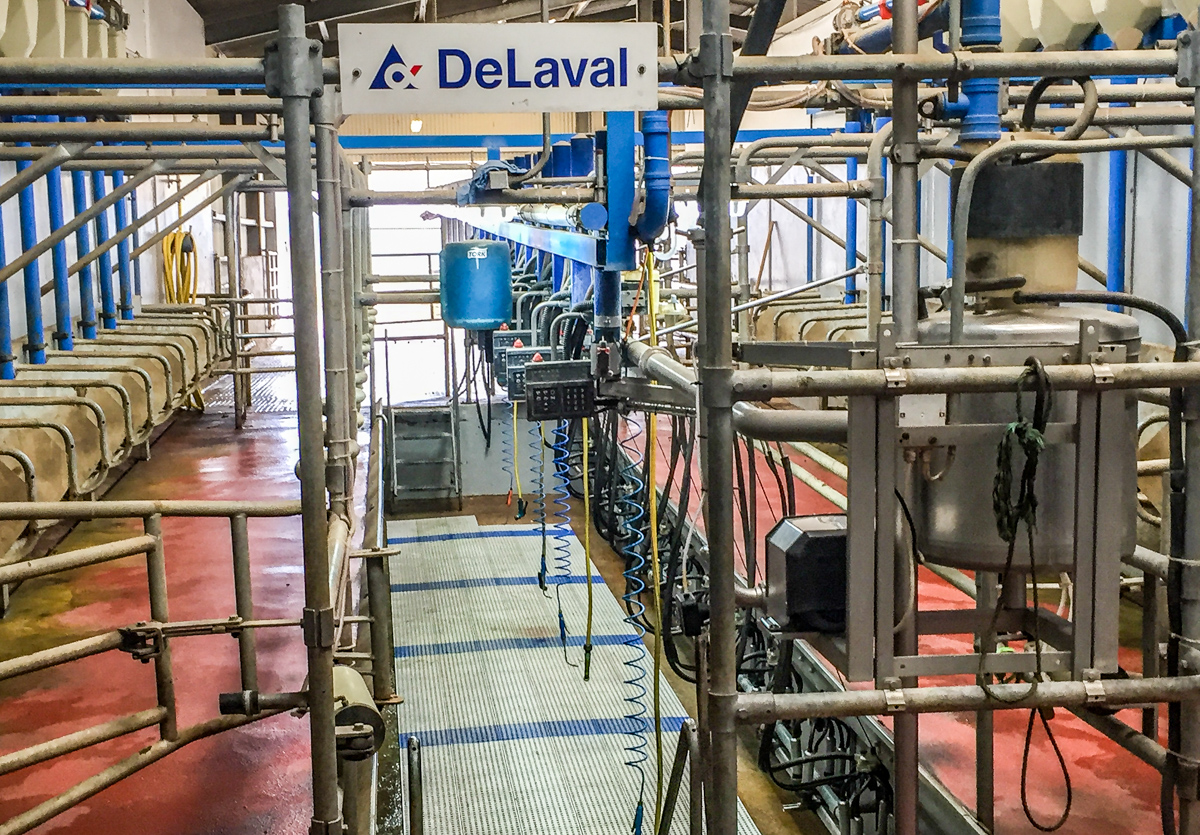 With the above mentioned improvements in mind, the bottom-line figure or profit per hectare has improved significantly in Ballyhaise; climbing from €450/ha in 2004 to €1,500/ha in 2017 (calculated at a base milk price of 29c/L and full labour costs). 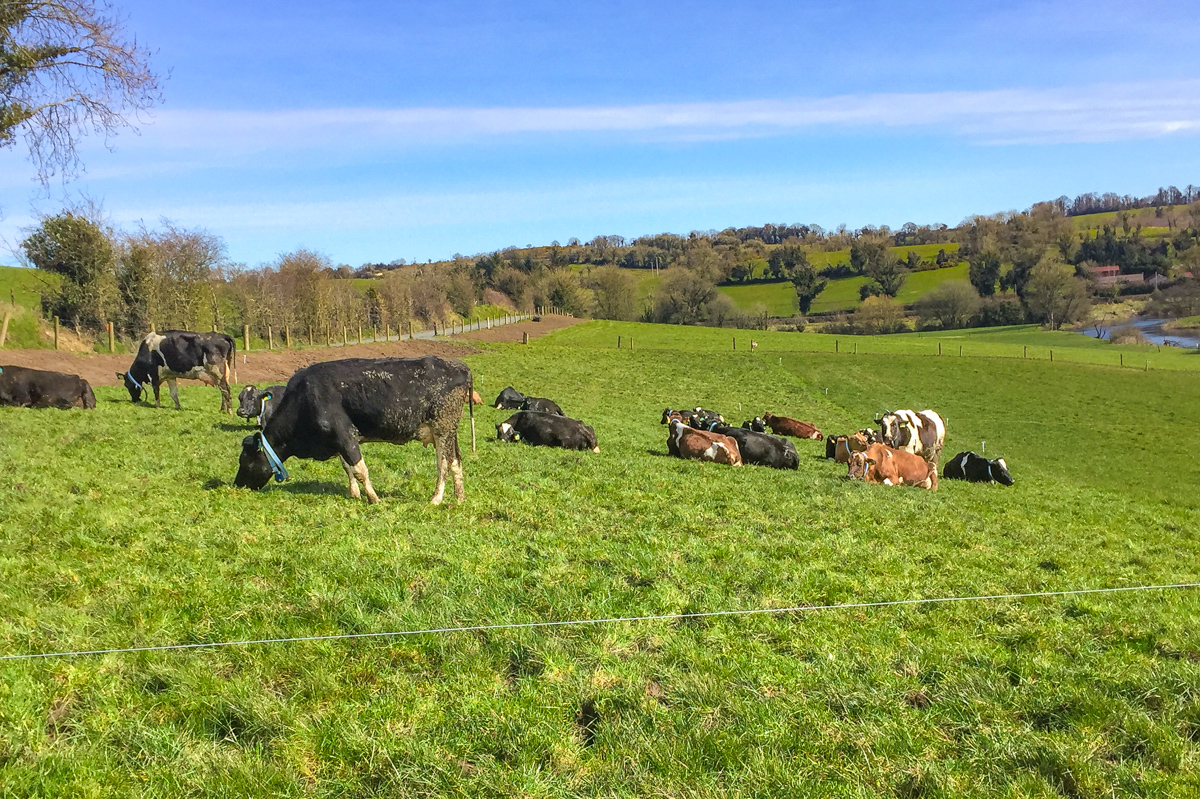 Although cow performance has been reduced between 2004 and 2017, owing mainly to a reduction in supplementary feed use, the improvement in the per hectare performance of the Ballyhaise herd during the same period has been realised through improved calving compactness, increasing the genetic potential of the herd for fertility and an increased use of grazed grass for milk production.

Oliver concluded: “Based on all of the work that has gone on over the last 14 years, we are achieving quite a decent profit of €1,500/ha which is a good take home message for farmers [to show that] this level of performance can be achieved.” 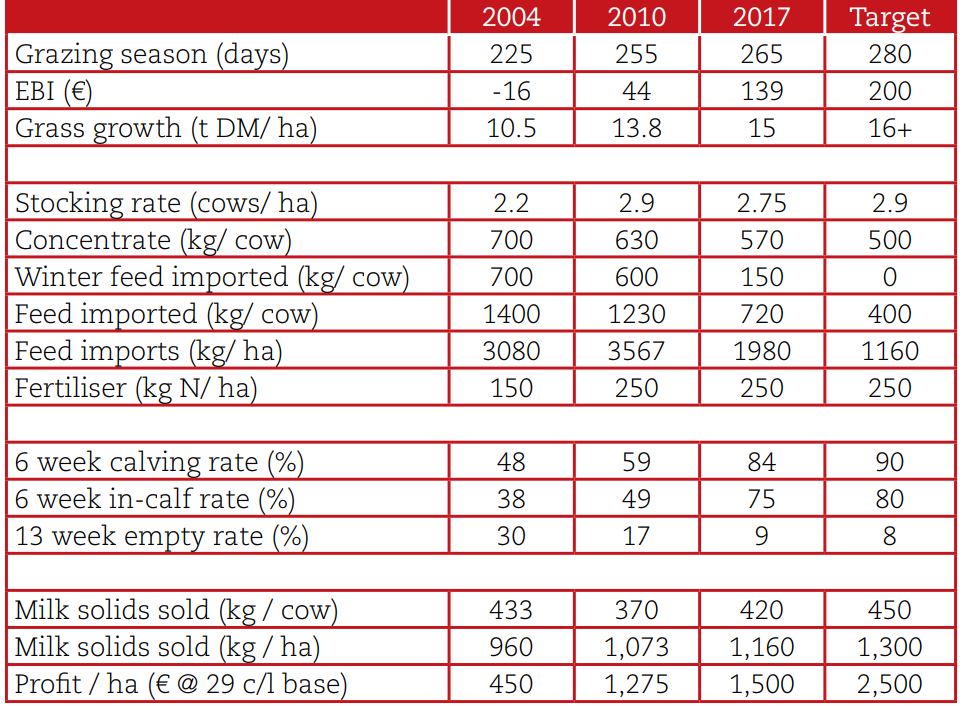 A new farm system project was established at Ballyhaise College in 2017 to quantify the biological and financial effects of alternative stocking rate and grazing season length combinations over four consecutive grazing seasons.

140 cows (consisting of 50% Holstein Friesian and 50% crossbred cows) were assigned to one of four grazing treatments. The four experimental groups were comprised of two grazing season lengths – average (205 days; March 15 to October 20) and extended (270 days; February 15 to November 20) – and two stocking rate treatments – medium (2.5 cows per hectare) and high (2.9 cows per hectare).

The preliminary results from year one of the project indicate that extending the grazing season by 60 days resulted in similar individual animal performance, but in a significant reduction in the requirement for both concentrate and silage. 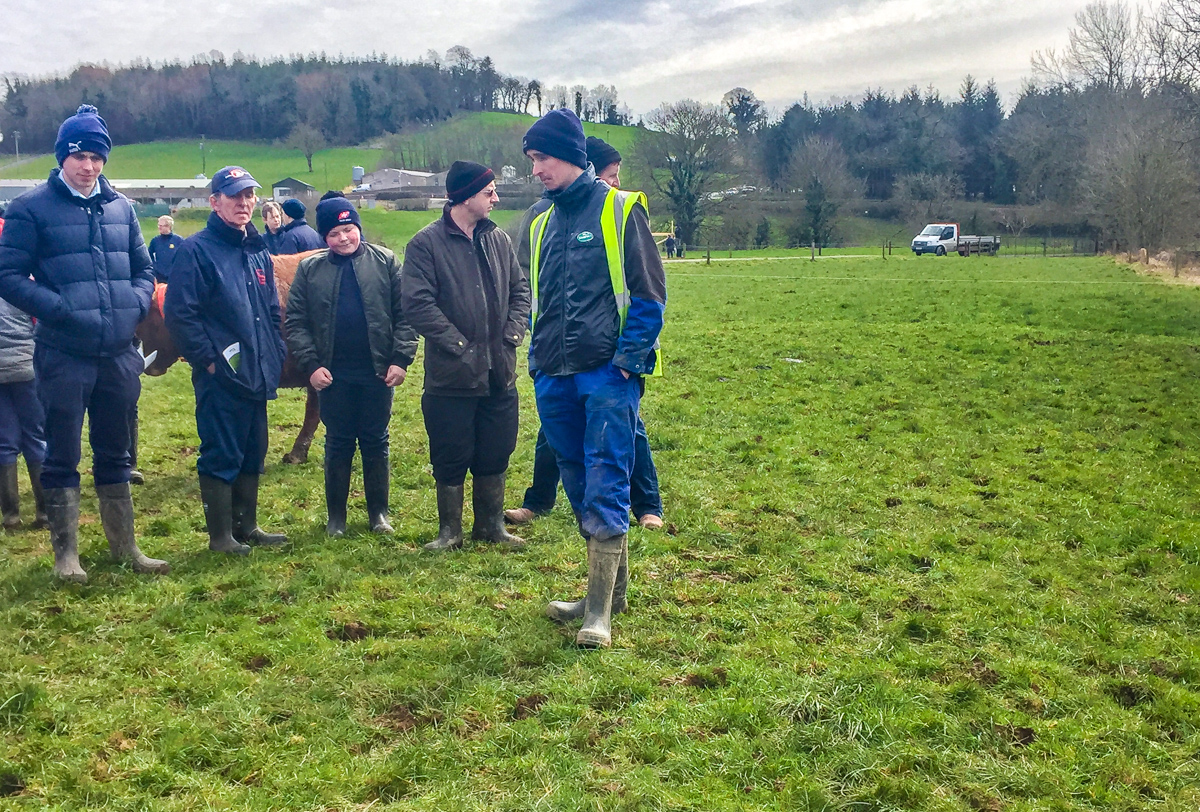 The results of the project also demonstrate the significant potential to increase productivity from pasture by increasing stocking rate on dairy farms in the region. A full economic appraisal of the production systems will be undertaken at the end of the project.

Herd manager Barry Reilly touched on the performance of the herd so far this spring. He said: “The early turnout, high stocking rate group were turned out on February 19 and have been at grass for all but eight days.

“The average farm cover (AFC) stands at 440kg/ha, 70% of their block has been grazed and 70-75kg units of nitrogen have been spread per acre.”