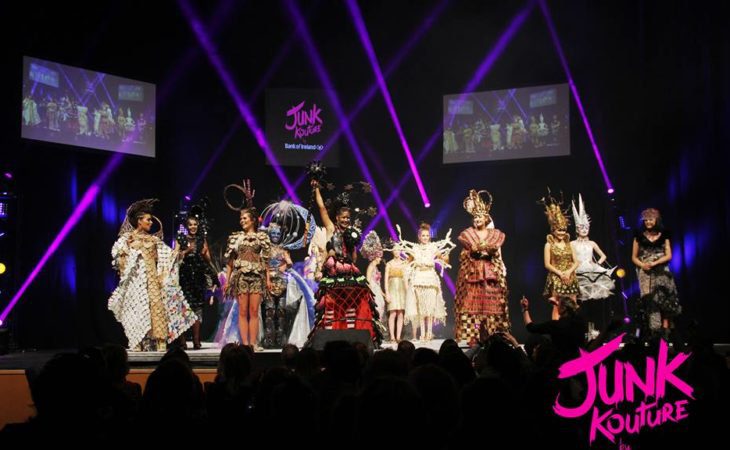 Three Wexford students have taken a ‘sheepish’ approach to fashion for their entry to the Bank of Ireland Junk Kouture competition – which is through to the national final.

Nicola Dobbs, who is modelling the ‘Meet the Little Flockers’ creation, is aged 16, and from Caim, Enniscorthy. She is joined by Aine Byrne, 15, from Ballyduff, Ferns and Aoife Clauson, 16, from Kilrush, Bunclody.

They attend FCJ secondary school in Bunclody. “Junk Kouture is offered as a 16-week transition year module in our school. We decided to enter as we were interested in the creative, artistic and social aspects of the competition,” said Aoife.

“We quickly moulded together as a fun group of three, all having our own strengths to bring to the team, under the supervision of our teacher, Ms. Suzanne Murray,” she said.

We created this design as we come from a rural part of Wexford where sheep farming is what defines a boy from a man. We wanted to incorporate what we already had at our very fingertips, using materials that were lying about the farmyard.

“Aine is a sheep farmer’s daughter and we used this to our advantage. The message we want to spread with this outfit is that a sheep can be just as stylish as a runway model if it wants to be and that sheep fashion is under-rated.

“We also wanted to show the beauty that can be created using natural resources while focusing on the topic of sheep,” Aoife said.

“Aine’s dad had excess rolled beans [used in sheep ration] and we used over 1,500 of them to decorate the skirt, top and boots. We also used some as facial decoration,” she said.

“Crushed soya beans were incorporated to add a golden pop of colour and contrast to the front of the skirt and for facial and arm decoration.” 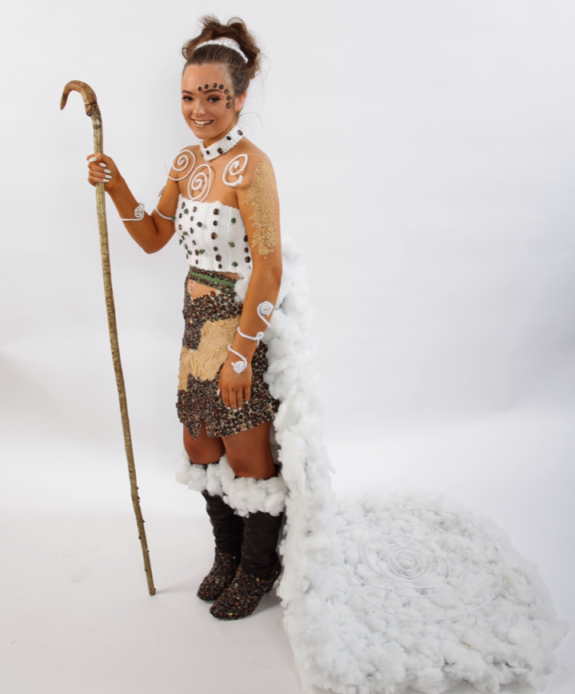 Old pillow and teddy bear stuffing was used on the train and on top of the boots as it resembled sheep wool. “We unravalled an old jumper to get wool to knit the top, hairband and choker. Old fencing wire was twisted for bracelets and armbands and then wrapped in wool,” said Aoife.

“A real sheep horn was used to decorate the top of the shepherd’s staff and a broken blind was used to make the body of the skirt. A torn curtain was repurposed for the belt, train and the bottom of the skirt.”

One of their biggest challenges was incorporating the sheep wool into the design.

“To begin with, it was dirty and full of bugs. We tried washing the wool but it was too difficult to work with as it was very greasy and smelly,” said Aoife.

“After this dilemma, it was back to the drawing board. One evening, Nicola’s little sister was playing with her teddy. Some of the contents had fallen out and we noticed how it resembled sheep wool,” she said.

“It was difficult to glue the stuffing onto the train and once all glued down, the train became very heavy to wear and in particular to remove during the dance routine,” said Aoife.

They included a thick belt and a very large button to help with this. As they felt a bit sheepish about dismembering any other teddies, they used the stuffing from an old pillow to finish off their design.

Over 1,500 students entered the competition, with approximately 80 selected for all of the five regional finals for north, south, east, west and Dublin.

These were whittled down to 86 for the grand final which will take place in the 3 Arena on April 19. 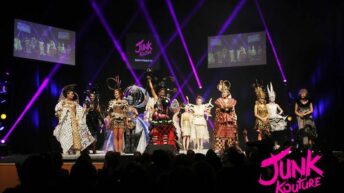