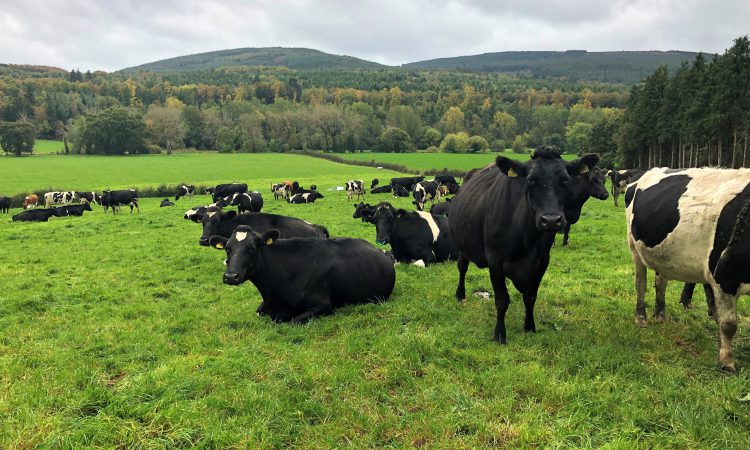 For this week’s dairy focus, AgriLand travelled down to Fermoy, Co. Cork, to visit a 450-cow dairy farm owned by Kevin Twomey – a well-known dairy farmer and chairperson of the Teagasc Dairy Stakeholder Group – and his wife Margaret.

The farm, which is located just outside Fermoy town, is Kevin and Margaret’s home dairy farm and consists of 150ha – made up of both owned and leased land. The Twomey’s are also involved in three other dairy operations in the Munster area.

During the visit, we caught up with Cian Jobe – the farm manager – who filled us in on the history of the farm and how Kevin has grown the farm to where it is today.

“Originally, Kevin bought this farm. He was in beef and tillage for awhile, before he swapped over to dairy. From there, he began growing cow numbers until he reached 300 cows.

“Then, some land came up beside him which allowed him to expand further. Last year, we milked 380 cows and – this year – we milked 450 cows through the old 20-unit herringbone parlour.

Up until a few months ago, milking on the farm was nothing short of a nightmare – taking up to four hours in the morning and three hours in the evening. 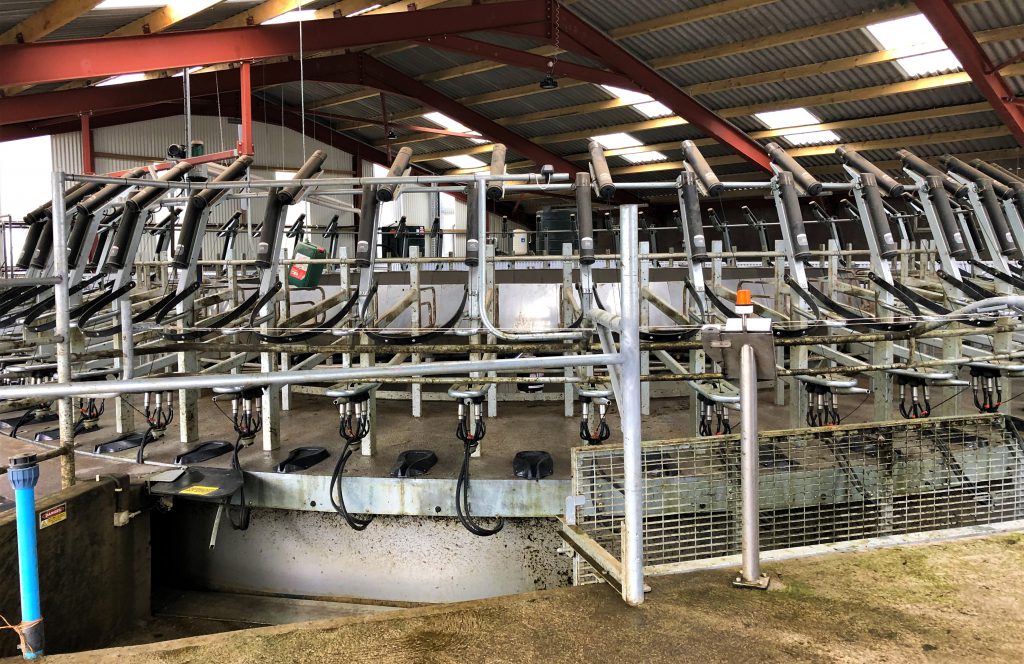 Recently, an impressive 50-bale Milfos rotary parlour was installed on the farm – halving the milking time down to two hours in the morning and a hour and a half in the evening.

I’d do it again. If it was a means to an end, I don’t mind doing it. But, sometimes you would look out into that yard and think you were never going to see the end of it.

Cian has been managing Kevin’s home farm for a little over a year now, but is due to leave before calving begins, to take up the role of farm manager on another 350-cow dairy farm – where he hopes to go share milking in the future.

At present, the farm is stocked at three cows/ha; there are intentions to increase the herd size to 500 cows next year – when the stocking rate will then reach 3.3 cows/ha.

This herd itself is a mixture of high-EBI black and whites and crossbred cows; the EBI of the herd is €179.

“Ideally, we want a cow which is 70% Friesian and 30% Jersey. This year, the herd went too far down the Jersey route and we felt the herd was getting too small. 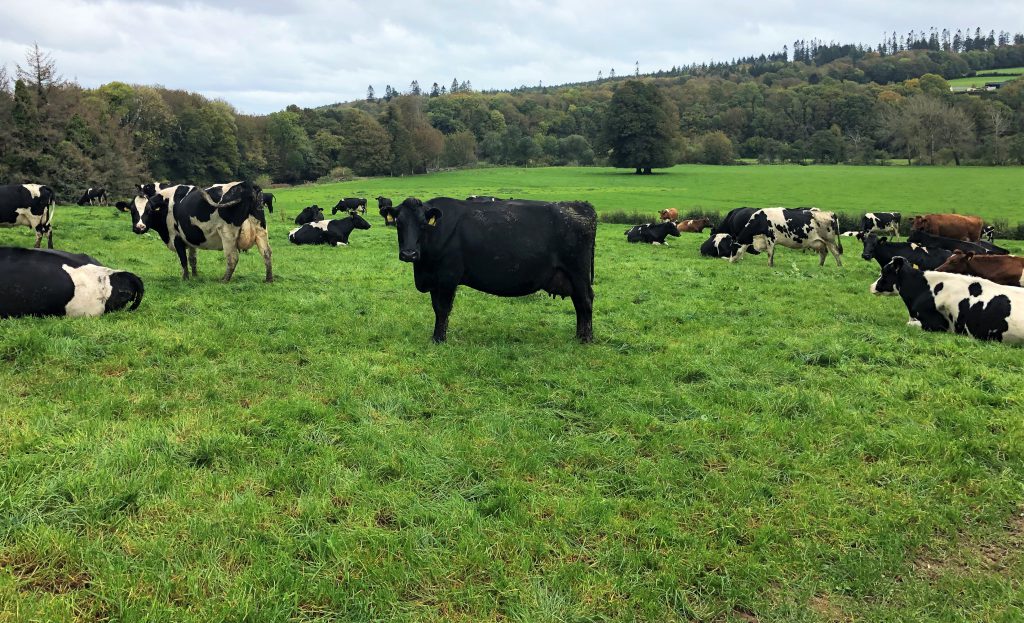 “So, we put nearly all Holstein-Friesian on the cows this year to bring back up the herd size, but still keeping our EBI maintenance figure high,” explained Cian.

After an 11-week breeding season – consisting of six weeks of dairy straws followed by five weeks of stock bulls – a 7% empty rate was achieved.

Touching on the performance of the herd, Cian said: “Going by the milking recording results, the herd has produced 412kg of MS/cow to date and is projected to reach 499kg of MS/cow – but this is based on a 305-day lactation, so it might not be just that.

“In terms on meal feeding, I would say we have fed approximately 500kg/cow to date. So, we will probably, in total, feed around the 700kg/cow mark.” 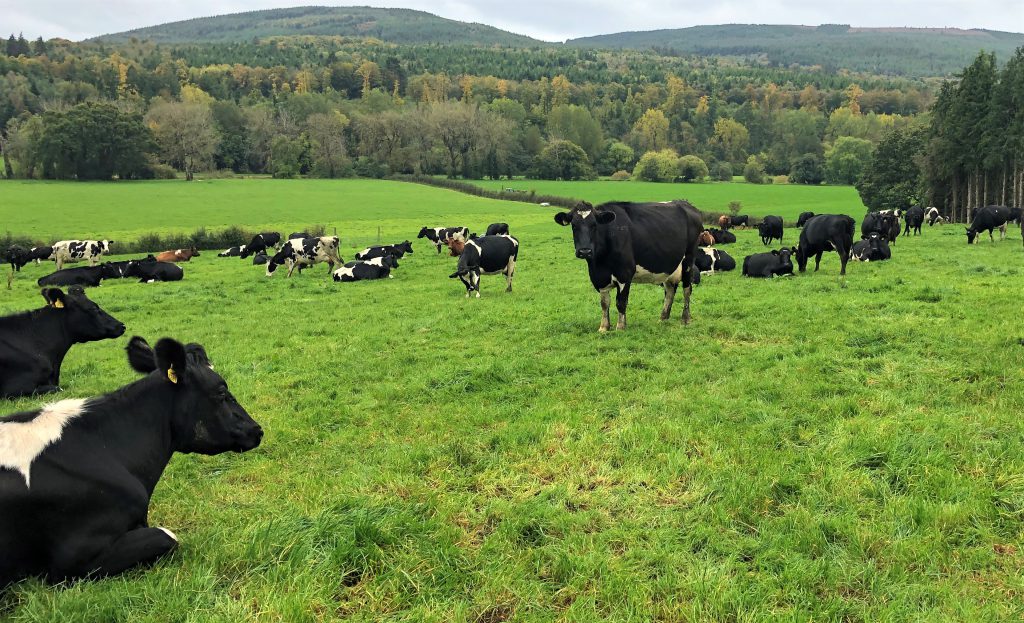 Regarding the drying off protocol, Cian said: “We milk recorded last week, so we will start drying off any thin cows or any cows yielding less than 10L/cow this week. Then, we will dry them off in batches up until December 10.”

On the topic of selective dry cow therapy (SDCT), Cian explained: “We haven’t discussed it yet, but I would be hoping we would be using it on some of the cows.

“For the first year, we were going to experiment and only use it on cows with a somatic cell count (SCC) below 50,000,” he added.

Just three months ago, the finishing touches were put onto the new 50-bale Milfos rotary parlour. The features of the parlour include: automatic cluster removers (ACRs); retention bars; automatic teat sprayers; an AI/scanning stand; and an automatic wash system.

The only thing missing is a backing gate. But despite this, Cian said: “The cows all come in themselves. There is only one cow that doesn’t and the only reason she doesn’t is because she is a pure pet and all she wants is for you to go out and give her a scratch.”

Outside of the parlour, a new collecting yard was installed along with an Alfco drafting system, a herringbone crush and a permanent footbath. A 17,500L milk tank is on the farm too, but the plan is to get a new one as it can only hold three milkings.

Commenting on why they waited so long to upgrade the parlour, Cian said:

Kevin wanted to make sure he had the land and stock in place before he made the investment.

“As well, the parlour ended up taking a lot longer than we thought. We thought it would be finished in March, but we didn’t start milking in it until the first week in August.”

The other facilities on the farm comprise of: 420 topless cubicles; 150 indoor cubicles; calving sheds; and two calf rearing sheds – one for bulls and one for heifers.

For the successful day to day running of the farm, Kevin is hugely dependent on farm labour. Particularly during the busy calving period.

“For me, because it is my first year farm managing, it is good that his home house is here – because he can just call down in the morning when I am milking if we need to discuss anything,” explained Cian.

Including Cian, his farm has two and a half labour units – a student and another worker who will be taking on Cian’s position once he leaves. 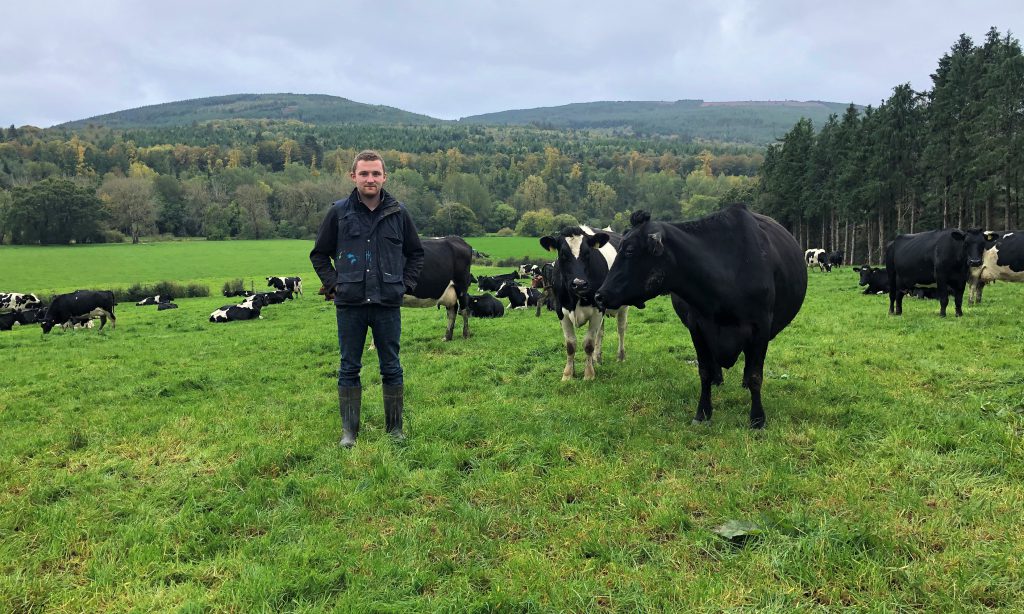 “In the spring, up until about Paddy’s Day, the roster is six days on and one day off, and the rest of the year it is 11 on and three off.

“At the weekends, we operate a one man show – one man is off and the other man does the relief milking on another farm,” said Cian.

Like all dairy farms, the spring period has the greatest demand for farm labour. During the spring, Cian explained that it is all hands on deck with Kevin and his family also lending a hand.

Last year, we had 350 heifer calves here. Once they are two weeks old, they go out to designated calf paddocks in batches of 50 and are fed on 50-teat feeders to minimise labour.

Before the visit, half of the heifer calves had left the farm and moved to two contract rearing farms – one in Co. Kerry and another one mile up the road. They go for their first winter and return before their second winter when they are in-calf.

Outlining how the work is divided up in the spring, he said: “The grassland management and the milking is left to me and another worker. A student is on the calves and we also have a relief milker who does four morning milkings/week.”

Before we left, we asked Cian for his take on the bull calf issue which, at the moment, seems to be the talk of the whole industry.

“I don’t think anyone has the answer and that’s the problem; but obviously, something is going to have to be done. This spring, with the whole beef thing, it will probably be the hardest.

“Farmers are going to have to start getting more facilities ready to rear the calves and that’s it. If it comes to it, we have some facilities here and we can rear them for longer if we need to,” concluded Cian. 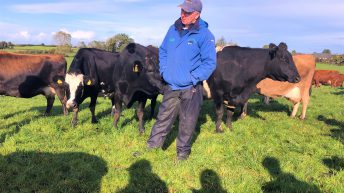 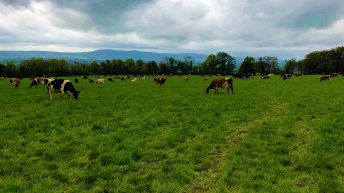 Dairy focus: Swapping black and white for red and white in Co. Cork