Aggregate dairy feed sales for the first quarter of 2015 have increased by 5% on the same period last year reports Teagasc’s Situation and Outlook July 2015.

This increase is somewhat surprising considering that many dairy farmers where trying to limit milk production to reduce the oversupply and minimise the superlevy bill, it says.

But the report suggests that the increase in dairy feed has occurred as a result of an increased dairy herd with cow numbers higher in the spring of 2015 than previous years.

Meanwhile, Teagasc says beef feed sales have declined by 11% for the first three months of 2015. This is the lowest level of sales since 2012.

A dry April and wet May in 2015 could have impacted on feed sales in the second quarter, it says.

Teagasc says unofficial data shows that feed usage is up 3% to the end of May 2015 on the same period last year. Dairy feed sales are up while beef feed sales are down on previous years. 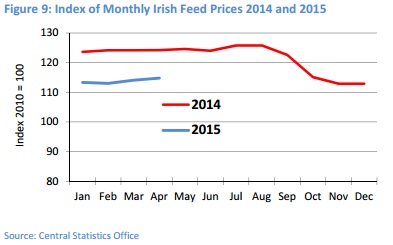 It also reports that feed prices declined considerably in the fourth quarter of 2014 but remained relatively stable in the first three months of 2015 before increasing slightly in the second quarter.

Feed prices for the remainder of 2015 will depend on this year’s harvest yield and quality, it says.

Early indications at EU level are showing a reduced harvest which will place moderate upward pressure on concentrate prices.

However, Teagasc says feed usage on grassland enterprises has fallen considerably in volume terms in 2014.

It says dairy feed use fell by 16% on the previous year to 870kg/cow in 2014, while beef enterprises have recorded similar declines.