Dairy farmers were urged – by Teagasc’s Lawrence Shalloo during last week’s Teagasc National Dairy Conference – to look inside their own farmgate, to see where efficiency gains can be made, before considering any further expansion.

The Dairy Conference was held last week on both Tuesday, December 3, and Thursday, December 5, in Killarney, Co. Kerry, and in Mullingar, Co. Westmeath.

Kicking off his presentation, Lawrence said: “The big question now is: ‘Where do we go from here and as an industry, what direction do we take?’

“To answer that, we need to look at the why; why farming? Why look at opportunities? Why expansion? Why consider further expansion?

“The where; where do we want to get to go to? Where are we relative to our goals? And finally, the how; how are we going to get there?” 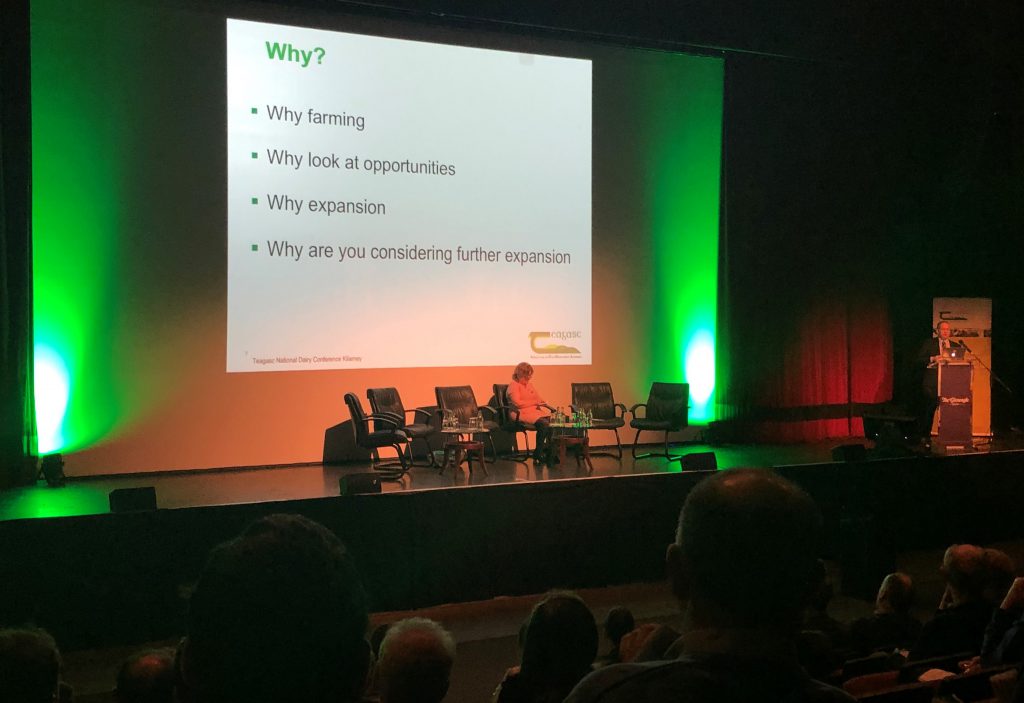 ‘Inside the current block’

Firstly, Lawrence encouraged farmers to take a look inside their current farm block where, nationally, there is still huge scope for dairy farmers to improve.

He stated: “For me this is the most important step; to see are we achieving all we can from our own block(s) – because that is where we are going to get the maximum return, before we even think about anything outside the existing platform or block.”

At the moment, the average net profit – including labour and excluding single farm payment (SFP) – is €430/ha at a 29c/L base price. This is with a return on investment (ROI) of 1.5% – with the target being over 9%.

“So nationally we are quite poor on average relative to the target,” he added. 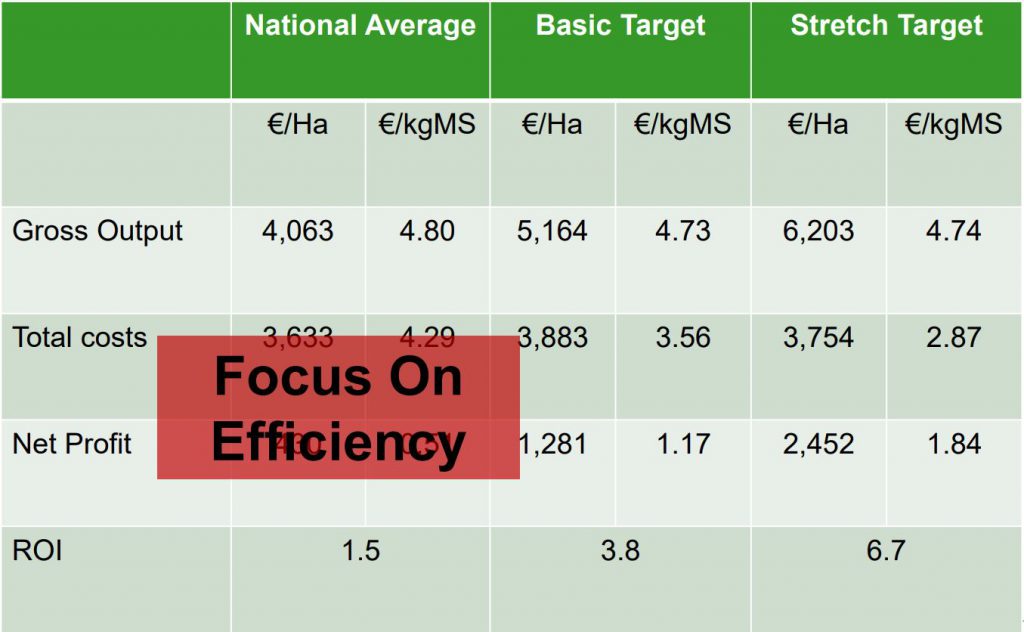 Clearly we have huge progress to make at farm level before we even think about other land, blocks, etc.

Lawrence continued by looking at some changes farmers could make inside their farmgate and the impact these would have in terms of profitability and ROI.

Some of these changes and their impact on profitability can be seen in the table below. 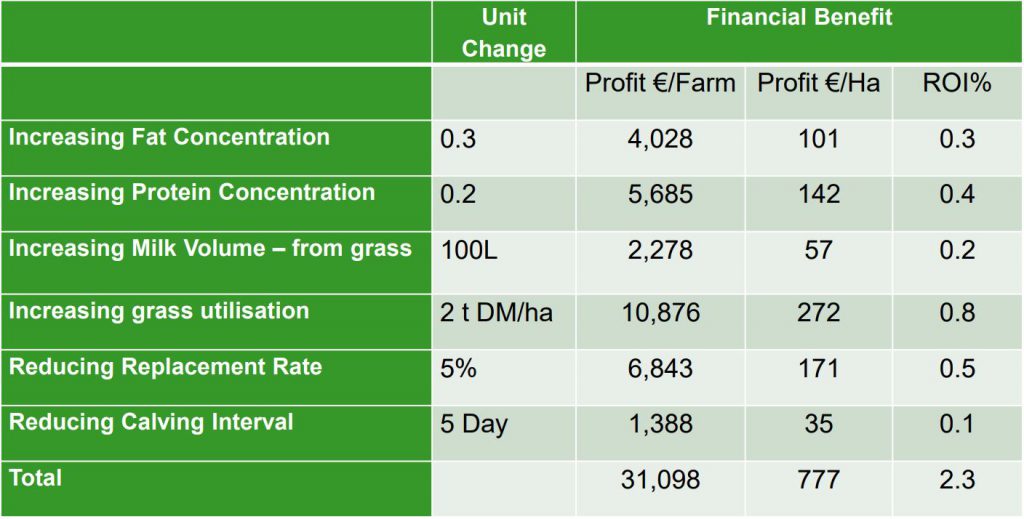 “All of these technologies put together can increase farm profit by €31,098 – on a 40ha farm. This equates to a massive increase of nearly €800/ha.

“But ROI has increased almost threefold, from 1.5% to 3.8%, having a dramatic increase in profitability and on returns,” he added.

‘Knowing when to stop growing’

Lawrence went on to highlight why it is so important for farmers “to know when to stop growing”.

He said: “If we continue to expand beyond what the farm can carry, in terms of grass utilisation, the system will become less profitable.

“That is a mistake that has been made in other countries; they go beyond what the farm can carry and then we start to lose money.

That is a classic example of running faster to stand still. You are carrying more cows, you are stocked higher, you are running an awful lot faster and you are making less money.

“We must never compromise on the system; the system is to match grass grown to stocking rate. Don’t over capitalise and keep labour efficient,” he stressed.

If the decision has been made to look at opportunities outside the current land block, Lawrence advised farmers on how to look at these opportunities – in terms of the if, or what, their potential is.

Before looking at the financials, he told farmers to ask themselves the following questions:

“Only if all those boxes are ticked should you consider putting a budget together. Ask yourself, does it make sense?

“The plan should drive the system and if the plan doesn’t work on paper it generally doesn’t work in practice,” he further stressed.

Leasing an outside block

Finally, Lawrence looked at a scenario of taking on a leased block – with rent of €500/ha and with €4,000/cow invested.

Touching on this, he said: “At a national average performance – with a 29c/L milk price – the profit is zero or minus €70/ha. Imagine what that would look like at a lower milk price.

However, he highlighted that initial performance is usually poor for any of these ventures and this should be included in the budget.

Within these new ventures, he said: “When investing, invest in what is going to increase profitability. And, profitability will be driven by grass utilisation and dairy cow fertility.”